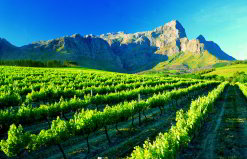 Wine tourism will finally get its own
official exhibition when the Vindaba
takes place in September next year.
(Image: Franschhoek Wine Route)

Two of South Africa’s leading industries, wine and tourism, will combine for the country’s first ever wine tourism exhibition.

The Vindaba takes place at the Cape Town International Convention Centre (CTICC) in September next year and will run parallel with the Cape Wine exhibition at the same venue.

The exhibition, backed by both national and provincial governments, will target the international travel trade as well as wine, travel and lifestyle media.

According to André Morgenthal, Wines of South Africa’s (Wosa) communications manager, the Vindaba will look to exhibit the hotels, restaurants, wine routes, tour operators and farms that are linked to the wine industry.

As South Africa is considered a world leader in eco-sustainable wine production, organisers aim to promote Vindaba as a green initiative by using recycled and recyclable materials.

The Vindaba is the brainchild of Wosa, South African Tourism, Cape Town Tourism, Wine Routes, Cape Town Routes Unlimited and the Department of Finance, Tourism and Economic Development of the Western Cape.

Morgenthal explained that the CTICC was chosen as a venue because it is able to accommodate the exhibition’s expected 1 000+ guests and more than 320 wineries and 100 travel trade organisations.

Though the Vindaba and Cape Wine are taking place at the same time, Morgenthal said they target two different industries. The former looks to attract international tour operators who specifically offer wine tours, while the latter targets wine traders.

Speaking at a stakeholder’s workshop in April this year, tourism minister Marthinus van Schalkwyk said wine tourism is currently one of the fastest growing sectors in the global tourism market. He further stated that it should be central in marketing South Africa as a long-haul destination.

Van Schalkwyk added that wine tourism provides the country with a competitive edge when it comes to the global tourism market, especially over destinations such as Brazil, Kenya, Australia and Thailand.

Another South African advantage is that the majority of vineyards are concentrated in the Western Cape, making travelling easier for tourists.

With an organised wine tourism sector, more jobs will be created in an industry that already employs as much as 275 000 workers.

Though wine tourism has been part of South Africa’s tourism setup since 1971, when the Stellenbosch wine route was launched, it has never received the marketing treatment that Vindaba promises.

Morgenthal has spent nine of his 10 years in the wine industry trying to persuade relevant parties to believe in the value of wine tourism. “I was bashing my head and knocking on doors to officialise wine tourism.”

He believes a lack of resources delayed its recognition as a worthwhile investment. He added that the industry had to mature over time before its intrinsic and financial value became evident.

The phenomenon of wine tourism

The global growth of wine tourism can be attributed to the influence of the media, said Morgenthal, who believes genres such as the internet and television have played massive roles in shaping the public’s perception of wine in the last five years.

He said people have become so interested in lifestyle and cooking shows that entire television networks are now dedicated to such shows. Thanks to these networks and the internet, the lifestyle attached to food and wine has become easily accessible.

People, said Morgenthal, are willing to spend money on trips to vineyards that produce their favourite wines.

“They want to get closer to the real thing, for the experience beyond the bottle. They want to be part of the process. When they are there, the wine tastes better.”

Additionally, a trip to a vineyard educates enthusiasts who want to know more about wine.

Morgenthal said some vineyards are finding creative ways to lure consumers by offering mountain bike rides, horse rides and even jungle gyms for children, therefore compelling the consumer to extend their visit.