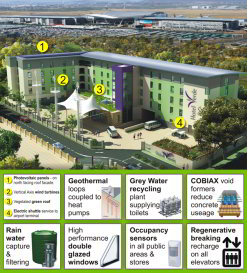 Already known as an innovation hub and renowned for the excellence of its hospitality offerings, Cape Town will soon be the home of the most eco-friendly hotel on the continent.

As the COP17 conference draws to a close in Durban, and while the world’s focus is on green issues, the news comes at an appropriate time.

The hotel – to be fittingly known as Hotel Verde, or the green hotel in Italian – will be developed by Cape Town-based Dematech, which is currently wrapping up the final approval for the project. Established in 1993, Dematech has almost two decades of experience in technical consulting and procurement.

The developer is hoping for completion of the project in early 2013.

Convenience and comfort for travellers

With convenience for the traveller a priority, Hotel Verde will be situated in the city’s airport precinct, and will offer an alternative to the well-established Road Lodge, part of the City Lodge hospitality group.

The hotel will offer 146 rooms and will qualify as a three-star, but according to a report on Cape Business News, the services, room sizes and fittings will be comparable to a four-star hotel.

For those who are a little low on energy, the hotel will provide an electric car shuttle service to the airport and another into the city. Guests will also be able to rent electric cars to explore Cape Town.

Hotel Verde’s developers are seeking Leadership in Energy and Environmental Design (Leed) certification, which is controlled by the Green Building Council in the US. The Leed system helps building owners and operators to identify and implement practical and measurable green building design, construction, operating and maintenance solutions.

And it’s not just good news for the environment – when complete, the hotel will have generated approximately 103 direct jobs and 247 indirect jobs.

“The Hotel Verde will prove to travellers that Cape Town is a global leader in its fight to combat climate change and to use the planet’s natural resources more effectively,” said Nils Flatten, CEO of Wesgro, the Western Cape provincial governments investment agency.

“It will show just how sophisticated Cape Town’s climate change mitigation and adaption strategies have become,” he added.

Once the hotel is complete, its technology is expected to be on a par with the Crowne Plaza Copenhagen Towers, in Denmark, named the world’s greenest hotel for 2010.

Hotel Verde will boast cutting-edge energy-efficient technology such as geothermal heating, ventilation and air-conditioning for temperature control, assisted by double glazed windows. Dryers in the laundry will use excess heat from the hotel to dry linen which has come from the low energy and water consumption washing machines.

The hotel will run on renewable energy generated by three wind turbines, and will gather extra energy from the sun through a photovoltaic solar panel.

To save electricity, public areas such as lifts and toilets will be fitted with motion sensors to control lighting, while the kitchen will feature energy-saving induction stoves and other green appliances including dishwashers.

Even the gym equipment will be fitted with power generating devices – these will serve as educationals tool to help guests understand how much work is needed to generate a specified amount of electricity.

As an added incentive to green-minded guests, those who use their towels more than once and don’t turn on their air conditioners will receive a credit note upon checking out.

The hotel will also encourage guests to become more aware of the need to save energy by holding its own weekly Earth Hour experience, where power will be cut in public areas. To enhance the mood, the hotel’s wood-burning pizza ovens will provide a delicious dinner, eaten by candlelight.

And for those who appreciate nature, a jogging trail will be set among a water-wise fynbos garden.