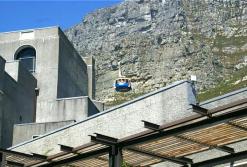 A cable car trip to the top of Table
Mountain is always a treat. 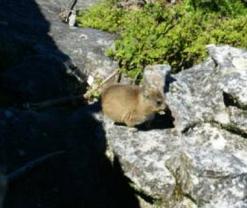 The mountain’s dassies, or rock hyraxes,
are so used to visitors that they pose
calmly for photos.
(Images: Lorraine Kearney)

The Mother City and her mountain worked their magic on a group of foreign journalists from the United Arab Emirates (UAE), who were on a flying visit to South Africa.

They were here as guests of Brand South Africa, the agency responsible for marketing the country abroad, on a fact-finding mission and to build relationships between the two regions.

Fresh from an interesting and informative few days in Johannesburg and keen to sample the famed delights of the Cape, they had just two days in the city to network, gather information and, of course, fit in some sightseeing.

On day one, Tuesday 13 March, the weather in the morning was glorious – sunny blue skies, a light breeze and temperatures that Capetonians consider on the hot side – at least hot enough to hit the beach and dive into the cold ocean.

Calling the Gulf states your home, though, means that 33 or so degrees is “comfortable”, in the words of Bahaa Alawam, a Syrian journalist working out of the Gulf.

He was joined by Mahmood Saberi of Gulf News, a Dubai publication; Peter Smith of Dubai Gulf Business; Hala Saqqa, a senior account executive at Hill and Knowlton Strategies in Dubai; and Roger Romanos, a senior editor at the Al-Iktissad Wal-Aamal Group.

The plan was to spend the morning at presentations indoors, with the Department of Trade and Industry.

The next item on the itinerary was a trip on the cableway up Table Mountain. Cape Town’s weather, however, is nothing if not fickle. By noon the wind had picked up and by 1pm the clouds were cascading over the southern side of the mountain.

By 2pm the cableway was closed for the day as the wind howled and clouds poured over the mountain and down the gorges. On the upside, the group did get to see her dressed in her famous tablecloth.

Instead of the planned trip energetic tour guide, Irwin Horsban of Kaylin Tours, packed the group back into the bus and took them on a memorable drive down Kloof Nek and into Camps Bay, on the western side of the Cape peninsule .

A stop for lunch and refreshments on the beachfront was a real treat, said Saberi. Romanos, who is originally from Lebanon but has been working in Saudi Arabia for six years, agreed. “What a fantastic place,” he gushed. “It was beautiful, spectacular.”

On the way back to the hotel the ever-affable Horsban took the group on a detour through the Bo-Kaap, with colourful houses and history, followed by a splendid seafood dinner at the popular V&A Waterfront that was variously described as “good”, “delicious” and “expensive”.

Wednesday – and Mother Nature came out to play, offering a glorious day without a breath of wind. Again, the morning was taken up with presentations and information-sharing, this time at the Oil and Gas Expo.

The historic Robben Island was on the agenda for the afternoon, but everyone opted for the mountain instead. Walking on one of the new seven wonders of nature trumped heritage.

The cableway was open, and cars were parked for several kilometres down the winding mountain road. But with tickets pre-booked online and a taxi ride to the cableway station there was little delay before the group was ushered into the large and airy cable car.

The car takes 65 people at a time, which can be a bit of a squash. There is no need to hog the windows though, as the floor rotates during the ascent, giving each passenger a 360° view.

Romanos spoke about investments. His company organises conferences between businesses, and he believes there is much scope for the two regions to work together. “Arab businesses are looking for opportunity,” he said.

When the group stepped out at the top the views took their breath away and they spent a good two hours wandering around, taking pictures and marvelling at the cute dassies, or rock hyraxes – these little animals are closely related to the elephant.

“I am half-way between happy and depressed,” said Saqqa, “happy to be here, but depressed that soon I have to return to civilisation.”

Her sentiments were shared by the other members of the group. Smith said: “I see Johannesburg is for business, but Cape Town is more for pleasure.”

There was time for some cold refreshments before a walk on the white sands of Camp’s Bay beach and dinner at a traditional restaurant in the city bowl.

“We are sad to go, but have enjoyed our time here,” said Alawam.