Tswaing Crater was created from a meteorite hitting the earth 220 000 years ago. (Image: Wikipedia Hungary)

Some 220 000 years ago a meteorite half a soccer field in diameter, travelling at 4 000 kilometres per hour, hit what is now the Gauteng province of South Africa, exploding with the impact of 100 atomic bombs. The result was the Tswaing Meteorite Crater, just over one kilometre in diameter, now a spectacular natural wonder with a salt lake at its heart.

Some 40 kilometres north of Pretoria, the site attracts 14 000 visitors a year, mostly Gautengers, who come to marvel at the crater, nestled within a 60m-high forested ring.

At the point of impact, the immediate area up to three kilometres around the crater, all life forms and rock as well as the meteorite itself would have vaporised. A broader area of 1 000 square kilometres would have been flattened. A gigantic air blast of up to 1 000 kilometres per hour would have added to the destruction.

These days the whole site is covered in dense bushveld, and walking along the trail on the rim, you’ll look down into this marvellous phenomenon, with the small 100-metre diameter lake at its centre.

The lake is filled by rain water and a spring. It used to contain high concentrations of salt and soda ash, which were mined for 44 years until 1956. The salt content has dropped, making it no longer viable to mine.

Today the crater is contained within a 2 000ha nature reserve focused on the preservation of the natural and cultural heritage. The reserve consists of several habitats: wetland, savannah, forest, riverine bush, and its own ecosystem centred around the salt lake, which is 13 times saltier than the Dead Sea, says Julia Barnes, deputy director of Ditsong: Tswaing Meteorite Crater.

The Soutpanspruit, a stream running east of the crater, feeds an extensive wetland system, with a mini delta harbouring numerous streams and islands. Up to 250 bird species have been recorded, among them the African hawk eagle, the river warbler, bee eaters and kingfishers. Game is abundant: kudu, impala, zebra, warthog, mongoose, snakes and leguaans or monitor lizards are to be found. Up to 480 plant species have been recorded in two rare habitats, says Barnes.

Tswaing was originally thought to be a volcano, but in 1989 boreholes were drilled into the crater floor, hitting solid granite at 200m. Analysis of quartz grains showed that there were shatter cones and recrystallised glass fragments, typical of an impact, confirming its origins as the remains of the meteorite impact.

Also revealed were the climatic conditions going back 200 000 years. Unlike the present climate of sub-tropical and dry-humid conditions, in the past there were alternating dry and wet periods, and at one point the site was a forest of yellowwood trees. These drill sites now contribute to the water flow into the lake and are still visible in the form of pipes protruding from it.

The analysis revealed too what animals, now extinct, lived at the time of the impact. These include the giant wildebeest or hartebeest, a long-horned giant buffalo and a giant zebra.

The arrival of humans

The name Tswaing means “place of salt” in Tswana. The first visitors to the site arrived during Middle Stone Age times, about 150 000 to 30 000 years ago. Small nomadic groups came to Tswaing to hunt game, gather edible and medicinal plants and to collect salt.

Around 800 years ago, Iron Age people came visiting. Their artefacts, such as decorated clay pots, have been found on the crater floor, indicating the presence of early Sotho or Tswana peoples. Their main reason for visiting was to collect salt, used for preserving and flavouring food, as well as for trading.

People subsequently settled in the area, farming cattle and crops, and collecting salt for domestic use.

When colonists reached the area they named it Zoutpan (Afrikaans, meaning “salt pan”), and settled, farming in the area.

In 1912 a soda mine was established in the crater and operated until 1956. After several grazing research projects in the area, in 1993 the department of agriculture took over a portion of the farm Zoutpan, and developed it into an ecotourism destination for environmental education, recreation and research.

These days various festivals are held at the site, the most popular being a music fest held in March. Accommodation is available in the form of four dormitory huts, sleeping 16 people each. The site is available for weddings and special occasions.

Guides are available for tours of the site, which is open from 7.30am to 4pm daily.

Local communities see the site as having religious importance. Sangomas, or diviners, are trained here at night. There is a belief that a snake lurks in the lake, says Barnes.

Another impact crater can be found about 120 kilometres south-west of Johannesburg in the neighbouring Free State province. The 250-300-kilometre wide Vredefort impact crater – formed by an asteroid some 10 kilometres in diameter hitting the earth – is located. Known as the Vredefort Dome, it dates back two-billion years.

This crater is not as clearly identifiable as Tswaing as it covers a much larger area, but its northern edges reach southern Johannesburg.

The significance of the Vredefort Dome is that when the asteroid hit the earth, the gold-bearing rocks of the Witwatersrand, which were deposited some 800-million years prior to the Vredefort impact, were downfaulted and covered with impact debris, being thus protected and preserved from erosion over the subsequent aeons.

That gold was discovered in Johannesburg in 1886, and decades later, is still being mined. One such operation extends to almost four kilometres below the surface – it is TauTona in Gauteng, the world’s deepest mine. 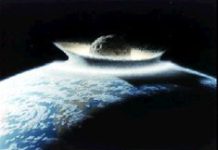 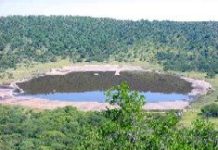