A handful of the world’s great cities trace their heritage to early human settlements thousands of years back. Johannesburg’s earliest residents were in the neighbourhood 3-million years ago.

Forty kilometres west of the city, among nondescript koppies, scattered shrubs and trees, is a 47 000-hectare valley known as the Cradle of Humankind.

Three million years of human activity have taken place in and around these caves, including people’s earliest-known mastery of fire, and 40% of all the world’s human ancestor fossils have been found here.

The biggest and best-known of the caves is Sterkfontein, where over 500 hominid fossils and over 9 000 stone tools have been found. It was at Sterkfontein that two major finds were made, that have changed modern paleontology:

Another major find was:

In 1997, Clarke, digging through more boxes of bones from Sterkfontein, found more footbones from the same individual – one with a clean break suggesting that more of Little Foot’s bones might still be inside the cave. Clarke went after the rest of Little Foot’s skeleton – and in 1998, amazingly, found it, or at least a significant part of it.

Maropeng brings fossils to life with interactive displays, stunning exhibits and a boat ride on an underground lake, the state-of-the-art Maropeng centre allows visitors to explore the rich fossil heritage of the Cradle of Humankind.

A complete skull and fragments of arm, foot and leg bones have been uncovered so far; the rest of the bones are still being painstakingly excavated from the rock. Some believe that Little Foot is the most significant hominid find since Raymond Dart’s discovery of the skull of the Taung child, a juvenile Australopithecus africanus, discovered in 1924 near a town called Taung in the far north of North West.

According to Clarke, the Little Foot fossil has yielded the most complete australopithecine skull yet found, found together with the most complete set of foot and leg bones known so far – with more extracted from the rock since then. In addition, the preservation of the skeleton is extraordinary, with most of the bones intact and joined in their natural position.

According to Talk.origins: “If Clarke’s expectations of further finds are borne out, Little Foot could become the most spectacular and important hominid fossil ever discovered, rivalled only by the Turkana Boy Homo erectus skeleton [discovered in 1984 near Lake Turkana in Kenya].”

The Sterkfontein valley consists of around 40 different fossil sites, 13 of which have been excavated. It includes Bolt’s Farm, where the remains of three sabre-tooth cats have been found in a pit that trapped animals; Swartkrans, site of the earliest-known deliberate use of fire, around 1.3-million years ago; Haasgat, where the fossils of early forest-dwelling monkeys, around 1.3-million years old, were found; and Gondolin, where 90 000 fossil specimens have been found since 1979. The area was declared a World Heritage Site in 1999. Although it is on privately owned land, any finds belong to the world, and the area is strictly controlled and protected.

In the late 1890s, miners dynamited the Sterkfontein caves, searching for limestone which they converted into quick lime, an element needed for the processing of gold and the manufacture of cement. They displaced the sediment and revealed entrances to the caves. The rocks contain cyclindrical shapes – evidence of early life called stromatolite, dating back 3.8-billion years.

These organisms breathed in carbon dioxide and breathed out oxygen, thus increasing the earth’s oxygen levels and leading to the evolution of other forms of life. Some 2.5-billion years ago, the area was an inland shallow sea.

Over time the water evaporated and the mud formed dolomite rock, in which the stromatolite are visible. Around 2-billion years ago a large meteorite, 10 kilometres in diameter, fell in Vredefort (100 kilometres south of Sterkfontein), leaving a massive crater now known as the Vredefort Dome. The entire area for hundreds of kilometres around was covered in debris, which helped preserve the gold reefs of the Witwatersrand, preventing them from being eroded – and also helped preserve the stromatolite rocks.

Some 3.5-million years ago, openings to the caves started appearing. They may have been occupied by sabre-toothed cats and other predators which would explain why the remains of large herbivores like wildebeest, extinct zebra and buffalo have been found in the caves. One of the caves is called Plover’s Lake Cave. It has been explored some 50 metres down, but beyond that point are a labyrinth of unexplored passages, and several entrances. A hyena and a porcupine are known to live there – no-one has spotted them, but their footprints are often seen. Excavations of Plover Cave and others in the area is ongoing.

The nearby Wonder Cave has an enormous chamber with beautiful 15 metre-high stalactite formations. The Cave is believed to be 2.2-million years old, and bones of rodents, frogs, lizards and birds have been found in the cave. It’s hard while walking around the area to fully comprehend the age of the sites and the importance of the finds.

Charles Darwin predicted in the 19th Century that the origins of humankind would be traced back to Africa because that’s where the great apes live. South Africans, and Joburgers in particular, don’t have far to go to take a stroll into life millions of years ago… so long as they are mindful of hyenas and porcupines. 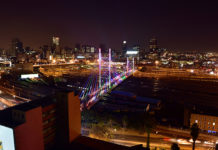 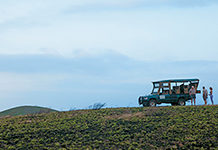