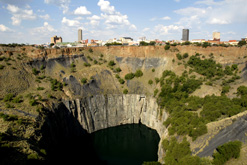 The “big hole” in Kimberly is a major
tourist attraction which has contributed to
the Northern Cape’s economic
development. 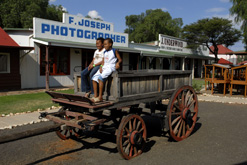 Even residents in small towns can use
their rich history, such as this ox wagon to
attract tourists. 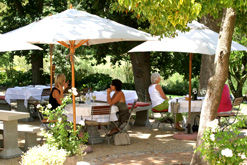 Stellenbosch has capitalised on it’s wineries
to bring tourists to the area.

Minister of environmental affairs and tourism Martinus van Schalkwyk has revealed that despite an economic slowdown in the country, tourism figures remained firm in 2008.

Statistics from the first 10 months of 2008 indicate an increase in arrivals of 5.4% from January to October.

In 2007, this figure stood at 8.3% and saw over nine-million foreign arrivals to South Africa.

Speaking at the opening of the local government tourism indaba on 26 January in Cape Town, Van Schalkwyk noted that the economic crunch has however seen a month-on month decline in arrivals to South Africa from other regions, compared to 2007.

Arrivals, for instance, from Europe decreased by 6.5% and visits from Central and South America dropped by 4.6%.

But there have been some positive growths too. Arrivals from North America remained stable and more people have also been flocking to South Africa from Australasia, where arrivals are up by 6.3%. Visitors from the Middle East have also been visiting our shores more often, with a 5.9% increase in visits.

The two-day indaba saw delegates from across the tourism sector converging under the theme, “Unlocking Tourism Potential at a Local Sphere of Government”.

Van Schalkwyk told delegates attending the indaba he was confident that South Africa’s tourism industry would continue to grow, “Our industry is by no means immune to the effects of the international economic crisis, but we are still confident that we will reach our target of 10-million visitors in 2010.”

“Our country continues to be a value-for-money destination and with international events like the Confederations Cup and World Cup lined up, there will be opportunities in abundance and tourism will retain the important role it plays in our economic growth.”

The driving force of the conference was the need to help local municipalities to grow their own tourism industries.

“The importance of the role of local government in the successful growth of the tourism industry cannot be overemphasised and the examples of its pivotal role are many.”

During the conference, a toolkit to help local municipalities develop a tourism strategy was launched.

The tourism toolkit will help to clarify how to complete a basic tourism plan within a South African local municipality.

It will help to make an important contribution towards ensuring that all municipalities are growing the tourism industry.

The components of the toolkit will consist of practical documents, which ensure that municipalities are able to involve themselves in the appropriate investment in infrastructure and services that will boost tourism.

It will also assist with the development of community tourism plans and provide case studies as examples of good practice.

The minister noted that there were a number of challenges, which were currently hampering the coordinated and integrated approach.

Some of these challenges include local authority staff not having the right vision for the municipality in terms of identifying destinations that tourists could visit in the area and planning accordingly.

In other cases, local government does not use national and provincial information made available for them in their tourism planning.

Van Schalkwyk told delegates that his department was however optimistic that the challenges could be overcome, “Our department remains committed to working with local government to ensure that the benefits of tourism are shared as widely as possible.”

He further noted that the relationship between national and local government had already shown some positive results, “Since 1999, we have been financially involved in 335 tourism projects in the nine provinces.

“To date, more than R1-billion (US$100-million) has been spent on these projects and these initiatives have contributed to the creation of 1 480 permanent jobs and more than 4-million temporary work days.”

The minister reiterated that it was important for those involved in the tourism sector to continually promote their country to tourists.

“It is more important than ever that Brand South Africa is promoted seamlessly and distinctively. We recognise that a visitor’s holiday experience is always further enhanced by good service, which is why we are very proud of the Service Excellence programme we will be implementing this year in partnership with the Tourism Business Council.”

He shared the secret of success of the Western Cape, which is currently South Africa’s most developed tourism region and the sector.

According to Strachan, the Annual Development indicators report of 2008 states the strong growth over the last decade has had a phenomenal impact on the tourism industry.

He said the only outstanding issue, which needed to be dealt with, was the lack of adequate transformation, as all the benefits from the tourism industry needed to be shared equally amongst all South Africans.