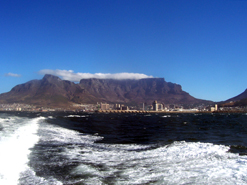 September’s sunny skies and magnificent scenery don’t only mean springtime in South Africa – they also herald the start of a 30-day drive to boost domestic tourism in the country.

Kicking off the campaign in Newtown, Johannesburg, on 27 August 2009, South Africa’s Minister of Tourism Marthinus van Schalkwyk said, “By travelling at home, South Africans contribute meaningfully to the tourism industry and its competitiveness, as well as to local economic growth and job creation.

“Domestic and regional tourism is the backbone of a sustainable and robust tourism industry,” he added.

Tourism also constitutes about 7% of employment in South Africa, both directly and indirectly.

Sho’t left around the country

At the tourism month launch in Newtown Van Schalkwyk unveiled the Sho’t Left billboard campaign, which aims to creatively motivate South Africans to travel within their own country.

Relaunched in August 2007 by the government-funded body SA Tourism, the Sho’t Left drive aims to promote a culture of local holiday travel, targeting ordinary South Africans and their families who have a desire to see more of the country but don’t know where to go.

“Sho’t Left” is derived from everyday South African “taxi lingo”. A commuter wanting a ride to a destination close by will say “Sho’t left, driva” – meaning, I want to jump off just around the corner.

The 10 billboards, worth more than R2-million ($258 712), have been strategically placed around Gauteng province – the economic powerhouse of South Africa identified as the greatest source of domestic tourists.

“As you travel your own country, you learn more about its diversity and tourism offerings. You also help to improve service levels and the competitiveness of the industry as a whole. This in turn makes all of us better hosts for regional and foreign visitors,” Van Schalkwyk said.

“We are less than 300 days away from the 2010 Fifa World Cup, and now is the time for all of us to contribute in every way we can to make sure we offer the world an unmatched experience in our fantastic country.

The minister announced that as part of the Sho’t Left campaign, SA Tourism has entered into a new deal with hotel groups, airlines and travel agencies to offer South Africans affordable rates when visiting local destinations.

South Africa’s month-long drive will be wrapped on 27 September with the celebration of the annual World Tourism Day.

For the past 30 years The United Nations World Tourism Organisation has used this day to raise global awareness about the important role that tourism can play, both socially and economically.

This year’s theme for World Tourism Day is “Celebrating Diversity”, which explores cultural wealth and the importance of sustainable tourism in ensuring that local traditions thrive alongside those of other cultures.

In South Africa, the Department of Tourism will put on celebrations in Kimberley in the Northern Cape province on 29 September.

A fitting host for these celebrations, the Northern Cape is firmly committed to developing tourism.

In 2008, in a bid to boost economic development, small tourism enterprise development, and job creation, the Northern Cape Department of Tourism, Environment and Conservation commissioned a tourism resource audit to develop and promote tourism within the province.

The project aims to use information generated through surveys as a guiding a process whereby tourism businesses and attractions are clustered together, creating attractive regionalised tourism spread out across the province.

Kimberley is synonymous with diamond mining in South Africa, which took off in 1871 and lead to unprecedented growth within the province.

The town is known for its “Big Hole” – a tourist attraction in its own right – which, ironically, began as a small hill rich in diamonds, known as Colesberg Koppie.

From the late 1800s until 1914 miners tirelessly toiled to remove some 25-million tons of earth from the site, turning the hill into a crater.

An observation platform erected close to the site nowadays provides a good view of the “Big Hole”, which is about 365m deep and covers an area close on 15,5 hectares. During its productive years it yielded about 14.5-million carats of diamonds.

De Beers, the world’s largest diamond-mining firm with operations now spread across the world, was founded in Kimberley and still has a prominent base in the town.

Jumping on the tourism bandwagon

Smaller tourism bodies across the country have also lent their support to tourism month by planning a range of special events.

In Grahamstown, a small town in the Eastern Cape province made famous by its annual National Arts Festival, the local tourism office, Makana Tourism, is working hard to offer a number of exciting activities during September.

“People forget that apart from providing information to tourists and marketing the area to potential tourists, the best tourists are the locals,” said Makana tourism director Willem Makkink, speaking to the town’s online portal Grahamstown.

“We are planning a series of tours that will showcase the area. We hope to teach the residents of Makana [the name of the greater municipality incorporating Grahamstown] about the myriad of attractions and activities that are to be found here. We are planning tours of the town, the surrounding villages and sites, and the game reserves,” he said.

In keeping with the theme of diversity, Cape Town in the Western Cape province will promote its melting pot of cultures and breathtaking scenery during tourism month through its “My Cape Town” campaign.

This will incorporate a series of mini-profile documentaries which will explore the lives of people who live in Cape Town, and why they love the city. Local station Cape Town TV will flight these profiles at various times during the month.

The city is also offering a photo competition during September, whereby residents are encouraged to take snaps of the sites that best embody the phrase, “This is the Cape Town I want the world to see”. Budding photographers can submit their entries via www.capetown.travel/worldtourismmonth and stand a chance of winning a cash prize of R15 000 ($2 000).

In addition to being tourism month, September also marks a celebration of South Africa’s rich and diverse heritage. While Heritage Day is officially observed every year on 24 September, various relevant activities take place throughout the month, in the form of music, dance, arts and crafts, and literature.

This year celebrations take place under the theme “Celebrating South African craft, our heritage”. In keeping with this year’s theme, the fourth World Summit on Arts and Culture will take place in Johannesburg from 22 to 25 September 2009, and will see crafters from across the world gathering there to discuss issues pertinent to the industry.