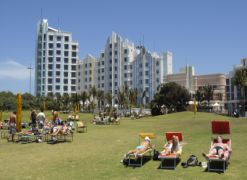 Tourists continue to find South Africa as the ideal destination judging from the figures from January to June 2013. (Image: Media Club South Africa)

South Africa’s scenic beauty, magnificent outdoors, sunny climate, cultural diversity and reputation for delivering value for money have made it one of the world’s fastest growing leisure, business and travel destinations.

The first six months of 2013 saw an increase of 5.1% in visitors compared to 2012, and during this period a record 4 642 217 international tourists arrived in the country.

According to the National Development Plan (NDP), which aims to eliminate poverty and reduce inequality by 2030, tourism is one of the sectors identified to do this.

“Tourist arrivals in South Africa grew 5.1% during the first six months of this year compared with the corresponding period in 2012, with the industry overall injecting R35.3-billion into the economy during this time,” said Tourism Minister Martinus van Schalkwyk.

The minister also stressed that strong public/private partnerships were necessary, as well as partnerships with communities to enable tourism to be beneficial to the NDP.

Gold exports derived R32.6-billion during the same period showing that the tourism industry was a key driver of growth and employment.

“Over a four-year period, we have averaged 9.4% compound annual growth for the first half of the year, despite ever-increasing global competition, tough trading conditions in some of our source markets and the fluctuating rand,” Van Schalkwyk noted.

The minister said the perception of tourism as elitist must be dispelled.

Tourism contributes 9% to South Africa’s Gross Domestic Product (GDP), with direct and indirect employment at around 9%.

“For us to compete as a destination in the current economic environment, where many travellers in our traditional core markets are choosing to travel for shorter periods of time and closer to home, we need to work harder than ever to be seen as a destination that offers brilliant value for money,” said Van Schalkwyk.

“Most of the people who come to stay here are tourists from Europe and Africa, while we have also seen an influx from Asia into our hotel,” said Deon Prinsloo, head concierge at The Palazzo Hotel at Montecasino, in Johannesburg, Gauteng Province.

What most surprised first-time tourists was how developed the country is; the variety it has in terms of places to stay and play; as well as food prices, he added.

Prinsloo has seen an increase in tourists wanting to experience our culture, especially with the passing of Nelson Mandela.

“We have requests from guests to go see historically relevant places lately.”

Strong growth was seen from German arrivals, South Africa’s third biggest source market, with arrivals growing by 13.8% in the first six months of 2013. There was also positive growth in arrivals from France (10.8%) and Italy (7.1%).

Last year Tourism South Africa concluded joint marketing agreements with seven trade and marketing partners in China, to package and promote a variety of South African products and experiences to Chinese travellers. South Africa is amongst 146 countries that have been granted “Approved Destination Status” by the government of China, and is one of the few that has begun to promote itself as a preferred tourist destination to the people of China.

Tourists from Africa have also taken to South Africa in a big way; arrivals from the continent grew by 4.8% in 2013.

Arrival by land from African countries grew by 4.4% while those coming in by air grew by 11.4%.

Arrivals from Ghana and Nigeria recorded the most growth with increases of 27.3% and 15.9% respectively.

A South African tourism office will open in Lagos in Nigeria on 28 January 2014 to market South Africa in West Africa.

“We remain confident in the growth in tourism arrivals from Africa, particularly from our air markets in West and East Africa. We are therefore proud to open a South African Tourism office in Lagos on 28 January 2014. We look forward to being part of the larger Nigerian travel community,” said Van Schalkwyk.

“Having a marketing home in this critical West African region will do much to bolster the relationships we have with both trade and consumers in the region, and unlock the full potential of tourism.”