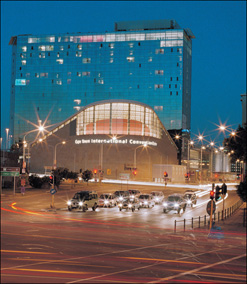 The state-of-the-art Cape Town
International Convention Centre. There
are currently more than 1 700 conference
centres in South Africa, each hosting about
860 events a year (Image: CTICC)

Growth in tourism to South Africa is outstripping world rates, with 9.7-million foreigners arriving in the country in 2007, up 8.3% on 2006.

Environmental Affairs and Tourism Minister Martinus van Schalkwyk told parliament on Tuesday 4 March that “Destination South Africa” was well on its way to reaching the 10-million arrivals mark by 2010, the year the country hosts the Fifa World Cup.

“Global growth over the same period was just over 6%, indicating that South Africa continues to outgrow global rates,” he said.

Business tourism in particular is surging, with business travellers visiting South Africa in 2007 spending big money: R2.4-billion (US$305.7-million) of the total direct foreign capital spent in the country over the year.

Speaking at the Meetings Africa Business Tourism Conference on 26 February, Van Schalkwyk said that those coming to the country on business generally spend more than leisure tourists.

“Business travel is a lucrative sector of the market which ramps up tourism’s contribution to the economy in general,” he said. “On average, business travellers spend three times more than leisure travellers and up to 40% of them are likely to return.”

South African Tourism, the country’s official tourism agency, has caught on to this windfall with its “business unusual” campaign, which President Thabo Mbeki used as his theme during his State of the Nation address at the opening of Parliament in early February. The agency says it’s crucial that the industry attracts large-scale international business conferences to the country, using all the best tourist destinations as a drawcard.

There’s still room for growth in the business tourism industry, according to South African Tourism chief operating officer Didi Moyle. “We have now intensified our destination marketing driving to attract foreign delegates to our range of world-class, international convention centres,” she said at the conference.

There are currently more than 1 700 conference centres in South Africa, each hosting about 860 events a year. The government, working with the tourism industry, is planning to attract more conferences to the country. Moyle said new ventures will include the offer of incentives to countries whose companies trade in South Africa.

Plans are also underway to improve international travel. Airports Company South Africa plans to spend R5.3-billion (US$675-million) on additional renovations at the OR Tambo, Cape Town and Durban international airports. In Durban, KwaZulu-Natal, the new R2-billion (US$254.7-million) King Shaka International Airport is under construction. At the end of March, a new R45-million (US$5.7-million) airport terminal will be completed.

Growth accross the board

Van Schalkwyk said that the increase in arrivals from across all the regions of the world, in particular air arrivals, reflects not only the growing awareness of South Africa as a tourism destination but also the success of the Airlift Strategy.

Cabinet approved the Airlift strategy on 26 July 2006, resulting in increased access to the South African market for foreign carriers. The strategy mainly addressed the air needs of the trade and tourism industry, enhancing the prospects for South Africa as a preferred air travel destination.

Moyle said that the statistics are looking impressive, with leisure tourism destinations aiming to expand their market share of the business tourism market.

As a sign of this success, Van Schalkwyk was awarded Africa’s Tourism Minister of the Year at the Africa Investor Tourism Awards on 25 February, beating his opposite numbers in Botswana, Kenya, Mauritius, Namibia, Morocco, Ghana and Tanzania.

The award was in acknowledgement of South Africa’s 10% increase in foreign arrivals between January and May 2007, as well as the minister’s efforts to encourage domestic travel. He led the process, which culminated in a National Tourism Skills Conference, to encourage the industry to invest in people.

Van Schalkwyk has also helped communities benefit from tourism through the launch of the Tourism Charter. Tourism’s estimated contribution to GDP increased from 4.6% in 1993 to 8.3% in 2006.