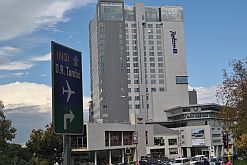 Hotels in plush Sandton are scoring big
from the local business tourism boom. 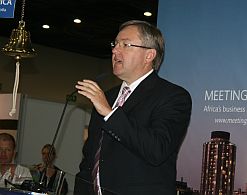 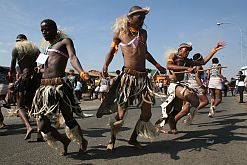 South Africa’s tourism sector will be boosted significantly by the 200 international events confirmed to take place in the country over the next five years.

The events include meetings and conferences which are expected to attract about 300 000 delegates.

“The potential economic impact of these confirmed meetings and conferences is more than R1.6-billion (US$222-million),” said the country’s Minister of Tourism Marthinus van Schalkwyk.

Van Schalkwyk was speaking at the opening of the Meetings Africa conference in Sandton, Johannesburg, on 21 February 2011. The three-day conference offers a platform to promote Africa’s tourism destinations un der one roof and is being attended by a host of international visitors.

The scheduled events will contribute to the growth of South Africa’s business tourism, which has skyrocketed over the years. More than 500 000 international business delegates visited South Africa in 2009, according to the tourism department.

Business tourism accounted for 4.7% of total tourist arrivals in 2009, an indication that leisure tourism still dominates the sector. Business tourists spend about R5 300 ($740) during their usually short stay in the country, representing an economic value of about R4-billion ($556-million), the department said.

The country’s major cities such as Cape Town, Johannesburg and Durban will host most of the upcoming meetings and conferences.

Durban in KwaZulu-Natal will stage the highly important UN Climate Change Conference later this year, arguably one of the biggest international events in South Africa after the 2010 Fifa World Cup. The conference will draw presidents and prime ministers of various states, among other delegates.

Environmental activists from several countries will also fly to South Africa to attend the event.

But the climate change conference is not the only big drawcard for Durban – the city will also host the International Transport and Environmental Conference, Commonwealth Pharmacists Association Conference and the Disabled Peoples’ International 8th World Assembly.

Johannesburg will also get a sizeable boost from the confirmed bookings. According to Lindiwe Kwele, CEO of the Johannesburg Tourism Company, the city will host 16 upcoming conferences. “We always try to attract events of international importance,” Kwele said during an interview.

Johannesburg’s upmarket Sandton will accommodate some of the world and Africa’s most progressive talk shops. By the end February, no less than five international conferences, including Meetings Africa, would have been staged in the suburb this year.

The next big event taking place in Sandton will be the three-day Africa Roads convention in March, where public infrastructure role-players will gather to discuss ways of ensuring safe and efficient road networks on the continent.

Hotels will benefit too, as almost all these events are held in boutique establishments. The Hilton Sandton hotel was the venue for the Carbon Markets Africa conference held in January.

Steady competition in the hospitality industry has stimulated vibrant marketing. “We’re all really hopeful to get as many visitors as possible and getting many internationals into South Africa is always fantastic,” said Kathy Davies from the Legacy hotel group.

The 5th Africa Economic Forum in March is one of the major events that Cape Town has scooped. Like Johannesburg and Durban, its line-up for 2011 is bulging.

Although far smaller than the other centres, Kimberley will host the 7th International Wildlife Ranching Symposium in October, while Grahamstown’s Rhodes University will be the setting for the Pan African Youth Summit will be in September.

South Africa hosted 90 out of 8 300 international events in 2009 – a year in which 55% of the venues were assigned to European countries.

The 200 impending events were confirmed over the last few years, and the tourism department hopes to attract more between now and 2016.

Cape Town scooped 49 of the scheduled events in 2009, with the International Congress and Convention Association ranking it a number-one African business host. Johannesburg was ranked fifth and Durban 10th.

South Africa was placed 34th in the international rankings and first in Africa. “These figures show that South Africa and our leading business tourism cities compare very well in terms of the rest of the continent,” said Van Schalkwyk.

Tourism contributed about 7.7% to South Africa’s GDP in 2010, during which about 7.3-million tourists visited the country. “Looking at the future, there is good news [for the tourism sector],” said Van Schalkwyk.