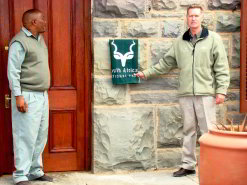 Nestled in the Waterberg Mountains in Limpopo province, the 76 000ha Marakele National Park, near the mining town of Thabazimbi, is a haven for wildlife species such as the Cape vulture, reedbuck, elephant, Jackal buzzard, kudu and the critically endangered black rhino.

The park, which is also home to threatened plants such as South Africa’s national tree, the yellowwood, and the Waterberg cycad, now boasts a new educational facility. The Thutong Environmental Educational Centre was officially opened on 20 June 2011.

Thutong is a public-private initiative of the South African National Parks (Sanparks) authority, with the generous help – to the tune of R7.9-million (US$1.1-million) – of the Anglo American Chairman’s Fund and the Sishen Iron Ore Company Community Development Trust, which was established in 2006.

Anglo America’s Kumba Iron Ore, which operates one of the world’s largest open-pit mines in the area, was also a partner in the project.

Speaking at the opening ceremony, Sanparks CEO David Mabunda expressed his expectation that Thutong would play a role in mitigating climate change in the region.

Established with the aim of getting young people together to discuss and share ideas on challenges facing the environment, the centre “… comes at a time when the global community grapples with the effects of climate change and global warming due to the greenhouse gas emissions into the atmosphere,” said Mabunda.

He believes that poverty is a factor in the degradation of the environment, and deems it essential that pupils and teachers learn more about the environment. In this way they can effectively contribute to minimising the negative impact on nature caused by human activities.

These facilities host youngsters and their teachers from local communities and visiting school groups, including those participating in Sanparks’ Kids in Parks educational initiative. Here they learn about the natural and cultural heritage associated with the area, and the importance of conserving these treasures.

Thutong consists of 22 rooms, six of them en-suite, and an auditorium which accommodates up to 140 people for workshops and functions.

Because the county’s ever-popular national parks and their centres provide outstanding opportunities to educate visitors about environment-related issues, Sanparks plans to build more such facilities.

The organisation is also currently involved in the environmental and conservation education of children in poor communities surrounding the Marakele National Park. The project has started in the communities around Thabazimbi and is to expand to neighbouring districts.

Sanparks welcomes any assistance to transport these children into the park, where the young visitors will sit through an introductory lecture, enjoy refreshments, and experience a game drive. A sum of R20 ($2.9) per child is needed and the goal is to raise the funds to give 50 children this opportunity every week. This project is expected to run for one year. Those willing to help can email vhr.kidsinpark@gmail.com.

SanParks came into existence in 1926, when the National Parks Bill was passed in Parliament. The bill, which was originally rejected in 1923, allowed game reserves to become national parks, promoting conversation and contributing to social and economic development. Since 1994, the total size of the parks has increased by 385 404ha.

Activities within the parks include research on wildlife diseases, reintroduction of populations into protected areas, inventories of biodiversity, the identification of threats to the biodiversity, and the creation and implantation of conservation plans for endangered species, to name a few.

Parks management are also kept busy ensuring that alien plants do not invade and kill off indigenous flora.

In addition, these parks and centres, as well as camping sites and conference venues, create employment opportunities for local residents. During its construction, the Thutong centre provided employment for about 50 people from surrounding communities.

There are overnight facilities in most parks, and each park has its own highlights, such as game drives, hikes and visits to local heritage sites or places of interest.

With the parks located in different regions, tourists can enjoy coastal, bushveld, mountain and arid surroundings. The parks and their activities allow tourists to view nature at its most unspoilt, and to appreciate the expansive beauty that is found in South Africa.