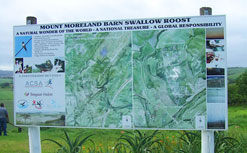 Mount Moreland attracts hundreds of birders
who gather at dusk to watch the swallows
congregating in their millions.
(Image: SA Venues)

The ecologically sensitive Lake Victoria
wetland is home to millions of barn
swallows in the summer months.
(Image: Sprig)

Durban’s King Shaka International Airport is set to welcome its first arrivals at the beginning of May, just in time for the 2010 Fifa World Cup.

Besides taking care of its human passengers, airport management is also putting the safety of birds high on its priority list.

The airport is situated on the north coast of KwaZulu-Natal province, some 35km north of central Durban. It forms part of the ultra-modern Dube Tradeport, which also includes an import and export zone and agricultural export zone, and is expected to significantly boost the economy of the region.

The brand-new airport will take over all the traffic that passed through the old Durban International airport. To accommodate passengers who may fly out of Durban International but return to King Shaka, leaving their cars parked at the former, the Airports Company of South Africa (Acsa) will offer a complimentary shuttle service for a week after King Shaka goes live.

However, during the planning of the airport it was found that a visiting flock of barn swallows (Hirundo rustica), also known as European swallows, had built a nesting colony in the 35ha Lake Victoria wetland near the small village of Mount Moreland – right in the path of the approach to King Shaka’s 3.7km runway.

These migratory birds visit South Africa in the summer months to escape the cold of the northern hemisphere, where they breed in vast numbers. The tiny creatures, each weighing an average of 18 grams, cover the round trip between South Africa – some 12 000km – every year.

The Mount Moreland colony is the largest in the country with between 3- and 5-million birds. The colony reaches its maximum size by November each year and the birds stay until mid-April, when they begin the long haul back north.

During the 30 minutes or so before sunset the swallows gather in large numbers overhead, wheeling and swooping, before retiring to their nests hidden in the reeds.

This spectacular sight attracts bird enthusiasts from all over the world, who trudge through the ecologically important Lake Victoria wetland, chairs and refreshments in hand, to reach the massive roost. Many attend the ringing workshops that are held to catch and mark the tiny specimens, enabling them to be indentified in other parts of the world.

Birds and planes can coexist

The colony posed a serious conservation problem not only for the airport developers, because the safely of incoming craft could be jeopardised, but also for bird ecologists and enthusiasts. Bats are also at risk.

At first the discussion focused on the possibility of destroying the reeds, but there was an outcry from organisations such as WWF South Africa and local and international chapters of BirdLife, who argued that destruction of the swallows’ summer roost would have a serious impact on their numbers in Europe. A new approach was needed.

The developers and environmentalists returned to the negotiating table and thrashed out specifics of the birds’ flying patterns and requirements for aircraft.

Once developers realised that the birds were in the air for no longer than an hour at dusk and dawn, that their nesting area was nearly 3km from the end of the runway, and that only about 5% of the flock tends to stray into the flight path, they were able to come up with a solution.

A special radar system was built in the US, at a cost of around US$300 000 (R2-million), to monitor the birds’ movements and enable air traffic control to advise pilots of potential safety hazards.

The radar scans an area of 3.7km both vertically and horizontally, and alerts air traffic control when unacceptably high numbers of swallows drift into the flight path. The airport’s bird and wildlife unit is also alerted immediately.

Because the birds are so quick to fly off and come in to roost, flights may be delayed or have to slow their approach for only a short time.

The system is up and running but must still get the green light from the South African Civil Aviation Authority. However, as the birds are scheduled for departure within the next couple of weeks, airport management will have a good five months to work out the finer details before they return in October.

The R8-billion (about $1-billion) King Shaka International Airport is the first greenfield project of its kind in Africa and by the time it opens will have been under construction for a lightning-fast 30 months. The airport is named for the fearsome Zulu monarch who ruled the area in the early 19th century.

Acsa has engaged a team of experts from Munich-based LGM to assist with the complex operational transfer programme. The German team has similar experience with about 10 airports around the world and is consulting with local technical staff to ensure that the transfer goes smoothly.

The airport is fitted with the latest technology and features a wide selection of retail and food shops. Ample foreign exchange and banking services are available, as well as car rentals.

A host of carriers, including all the local airlines as well as Emirates and Air Mauritius, will use the new airport, which can accommodate the largest passenger aircraft in the world, the Airbus A380.