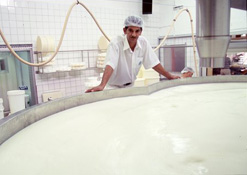 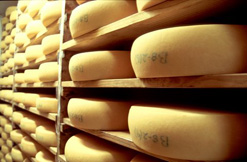 The cheeses mature for an average of six
months.
(Images: Wicus Leeuwner)

Traditionally, South Africans have not been particularly sophisticated cheese consumers. Until the last few decades of the 20th Century, you really had to know where to look to find anything other than artificially coloured bright yellow gouda or cheddar with the consistency and flavour of well-matured rubber. But as we draw to the close of the first decade of the new century, that is definitely no longer the case.

South Africa now has a few hundred boutique cheese makers, and even the big commercial cheese factories are producing quality cheese, moving away from the dark yellow plastic of previous decades. In 2008, big names like Clover and Parmalat appeared on the list of winners of Qualité awards.

These awards, started in 2001, go to South African dairy champions who have obtained a specific minimum score on an internationally recognised scale. Few products earn this prestigious award – in 2008 only 15 cheeses out of 478 made the grade. These are then allowed to display the distinctive and prestigious logo on their packaging for the year.

“The objective is twofold,” says Kobus Mulder, dairy manager for Agri Expo. “Firstly, it’s a way to reward manufacturers who have achieved outstanding quality in their products and, secondly, it provides a benchmark so that consumers can, with confidence, buy cheeses that display this accreditation,”

And one of the cheeses that cracked the nod last year was the Klein River havarti.

A river runs through it

The Klein River Cheese Farm is a little piece of heaven tucked away on the banks of the – you guessed it – Klein River, near the small but fashionable village of Stanford on the southern coast of the Western Cape.

The farm has a small tasting room, where you can buy cheese and other yummy delights like home made preserves and estate olive oil. And if you fancy a day down by the river, you can buy a picnic basket containing cheese (of course), cold meats, pâtés, a home-baked ciabatta, salad and cheese straws.

Riaan Lourens and his wife Shelley have been farming here for 30 years, and his father farmed the land before him. When he took over he had a big herd of Friesland cows and supplied milk to one of the big dairies. After a while he decided he could do better bottling his own milk, so he started supplying the nearby towns of Stanford, Hermanus and Gansbaai. As the latter two, particularly, were seasonal, in some months he found he had excess milk on his hands, so he decided to start making cheese.

He soon realised that the Friesland milk wasn’t ideal for cheese production, so he started buying in Jersey milk from a neighbouring farm. He has since stopped producing milk, and now concentrates on making cheese from Jersey milk that he buys from four farmers, all within a 20-kilometre radius.

Before he started to make cheese Lourens did some homework, and decided to make a gruyere-style cheese, as no-one else in South Africa was making it. It turned out to be a good choice. It’s of equivalent quality to the imported variety, and much cheaper.

Gruyere is made in Switzerland, so the cheese that Lourens makes in Stanford is called South African gruyere. It’s a rind-washed, or rind-brushed, cheese, he explains. The cheese is fermented for six months, during which it is washed with a brine solution every two days.

The brine solution contains a culture of Bacterium linens, which gives the cheese its distinctive taste, and slowly produces a brick-red rind. This is where cheese making gets interesting because, after a while, the culture permeates the maturing rooms, and the brine can be used without added culture for a long time before more needs to be added. And it mutates and evolves slowly in response to a host of factors including temperature, humidity, altitude and quite possibly phases of the moon.

“Those bacteria become the DNA of his cheese,” Mulder explains. “That’s why gruyere in Switzerland is protected. No cheese made anywhere else can ever taste like that. That’s why Riaan can’t just call his cheese gruyere. He calls it South African gruyere.

“But if someone makes South African gruyere in KwaZulu-Natal, it won’t taste the same. Maybe he should call it Stanford gruyere.”

The South African gruyere is Klein River’s flagship cheese, and its biggest seller by far, accounting for 70% of sales. It’s matured for six months, but Lourens also produces an extra-mature version, matured for 12 months, and a young version, that is matured for only three months.

Despite the success of his gruyere, Lourens couldn’t resist trying something new. After a year or two he made colby and leiden, but was in for a bit of a shock. It all went well until he put the cheese in the maturing room, where it started growing a red culture rind.

“It had an interesting flavour,” he says, and it’s clear from his expression that “interesting” is a euphemism. So now he keeps the colby and leiden, and later also the danby, in a separate cold house, where it is safe from the Bacterium linens.

They also make two soft cheeses – a Danish-style feta and a cream cheese, flavoured with either olives and garlic or sweet chilli. These are only sold in the farm shop and not distributed to other retailers. Lourens would love to add a camembert to the stable but, he says, it needs a different rind culture so he would have to build a whole new set of cold rooms.

How it all comes together

Cheese making is an ancient art, at once both easy and very technical. The method is simple but, in order to maintain a consistent quality, the process needs to be carefully controlled.

Lourens explains: “You heat up the milk with hot water or steam. You throw in your cultures and heat it up to the right temperatures, and then you add your rennet. We use plant rennet that thickens the milk. It takes three hours to make a batch. And then you put it into moulds. It stays in the mould overnight, and then in a salt brine for 24 hours or more, depending on the cheese. And then it goes to the maturing rooms for an average of six months. With the grana, we take it out of the brine, seal it and leave it. But the gruyere we have to wash every two days. It’s a lot of work.”

“Making cheese is very labour intensive,” says Mulder. “The cheeses are matured at different temperatures and relative humidity. And cheese is a natural product. Every batch of cheese you make is different. What we’re trying to do, [with the Qualité Awards] is to keep the standard of quality as consistent as possible”

But, as with many things, the proof is in the eating. I tasted my way through the range when I was in Stanford, and I left with a good supply of the South African gruyere, the grana and the Van Beulen. (The grana and gruyere are low fat, so that’s good, right?)