Pangolins are mammals distinctive for their protective keratin scales and largely solitary existence. This animal the most illegally trafficked mammal in the world. Here’s more on how they’re being protected.

Brand South Africa reporter
Together with Zimbabwean conservation group the Tikki Hywood Trust, a group of Zimbabweans is contributing to the care and protection of the Temminck’s ground pangolin, as well as creating awareness of the plight of this bizarre and reclusive mammal that not many know even exists.

Commonly called “scaly anteaters”, pangolins are mammals distinctive for their protective keratin scales and largely solitary existence. The animal is hunted for its meat and scales, and is the most illegally trafficked mammal in the world. They eat ants and termites using an extraordinarily long, sticky tongue, and are able to quickly roll themselves up into a tight ball when threatened. There are eight species of pangolin.

All eight species – four in Africa, including the Temminck’s ground pangolin found in Zimbabwe and South Africa – are listed by the International Union for Conservation of Nature and Natural Resources (IUCN) as vulnerable, endangered or critically endangered.

At the CITES CoP17 conference in October 2016, all eight species of pangolin were up-listed to an outright ban on all international commercial trade of the animal and its by-products.

The Tikki Hywood Trust, a wildlife NGO, was founded in 1994 to raise awareness of and sound conservation practices for lesser known, endangered fauna and flora globally, with a focus on the diversity of threatened species in Zimbabwe and the rest of southern Africa.

The trust also runs successful breeding and protection programmes to augment dwindling wild populations. These programmes design and implement standards and protocols, including captive management and animal rehabilitation. The trust’s efforts include working with a group of young Zimbabweans to rehabilitate captured and injured pangolins, as well spreading the word about the mammals’ vulnerability.

Watch the video on the group’s work below:

The guardian group is “entrusted with caring for animals that have endured major stress, often having been transported many kilometres bound in a sack, starved and dehydrated”, according to the Beautiful News website on 2 November 2016.

While rehabilitation of the pangolins can be long and arduous, with the animal’s instinctive reluctance to interact with humans a major obstacle to building trust in the relationship, the group does this with a deep respect and love for the animal.

“They have developed an intimate relationship while caring for them. Pangolins are like their children. And like any parent, they will protect their family from anything that poses a threat,” the report says.

I went to Zimbabwe to capture portraits of the individuals saving the #pangolin species. My #BeautifulNews film is out today at 4:14pm SAST pic.twitter.com/Jn53l13jHN

Creating global awareness through photography
Australian photographer Adrian Steirn, well known for his extensive nature photography and the 21 Icons portrait series, has released a series of photographs highlighting the group’s important work and their special relationship with the animals.

The photo series inaugurated Steirn’s Beautiful News digital platform, which continues his ongoing journey of portraying a true reflection of South Africa and the rest of the continent.

As the story of the Zimbabwean pangolin protectors aptly illustrates, Steirn hopes the new multi-media platform will “continue sharing powerful messages, reflecting the deeds and actions of the everyman in an inclusive and engaging style”. 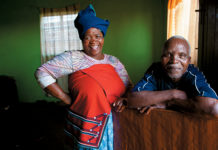 It is time for parity in unpaid housework