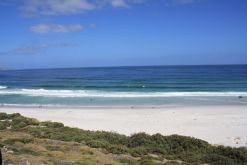 The pristine beaches of the Witsand-
Soetwater coastal conservancy are to
receive greater attention.
(Image: Kitespotters) 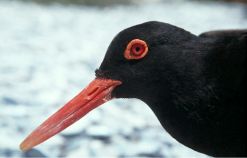 The African Black Oystercatcher, an
endangered bird, breeds in this area.
(Image: Wikimedia)

The popular and environmentally important Soetwater resort on the Cape peninsula has become the ’s newest coastal conservancy.

Situated about halfway between Kommetjie and Scarborough on the western side of the peninsula, the area is part of the vast .

Soetwater (Afrikaans, meaning “sweet water”) is of tremendous importance in terms of biodiversity, and is home to a variety of mammals, birds, reptiles and insects. In particular, the endangered African Black Oystercatcher (Haematopus moquini) breeds on the local beaches, and many caracal and clawless otter have made the area their home.

Some of the few remaining functioning coastal ecosystems in the region are found here.

However, Soetwater is also of socio-cultural importance, as it is a popular camping site that is used extensively, especially by Capetonians, for weekend or holiday getaways.

Some communities from the , according to the City of , have made it their tradition to camp out at Soetwater during the end-of-year holidays.

What also makes the resort a conservation priority is its proximity to the former Witsand (Afrikaans, meaning “white sand”) landfill site. Although the neighbouring site has been closed for over 30 years, old refuse still makes its way to the surface from time to time, blemishing the pristine white sands.

The heavy winter rains experienced in the during 2009 eroded enough of the Witsand dunes to cause old waste to flow down to the shoreline, where it almost completely covered the beach and washed into the water.

Ocean Minded, a brand of beach and surf footwear based in nearby Gordon’s Bay, organised a big clean-up towards the end of November, enlisting nearly 40 volunteers. Some 400 rubbish bags later the area, which is popular with surfers, windsurfers and kite-surfers, regained its unspoilt beauty.

Waste and biodiversity in the resort area need to be managed in a way that does not compromise the environment or rights of the community.

The establishment of a coastal conservancy will address all needs, as responsible camping and related social activities will be encouraged as much as conservation-driven birding and hiking.

The new Soetwater-Witsand coastal conservancy was proclaimed at the end of 2009. The protected area stretches from the famous Slangkop lighthouse in Kommetjie for about 10km along the coastline, down to Misty Cliffs near .

“We would like people to continue using the area they way they like to use it, but within a context where the natural habitats remain functional and healthy,” said Gregg Oelofse of the city’s Environmental Policy and Strategy Unit.

In January 2008 the city implemented strict new rules for the use of the resort, much to the disgruntlement of Soetwater regulars. The rules were far too strict for the liking of campers around the peninsula, and they rose up to complain to then-mayor Helen Zille.

Campers complained that the prohibition of alcohol and a ban on launching boats, gathering firewood and picking flowers or sour figs, among other regulations, had ruined their fun.

At its November 2009 meeting, the city council approved the allocation of R300 000 (US$) as an annual fee to the Kommetjie Environmental Awareness Group (KEAG), which will oversee the management and maintenance of the Witsand-Soetwater coastal conservancy and the Witsand landfill site.

KEAG is based on the Imhoff Farm near Kommetjie. The organisation already has a number of ecological projects under its belt, including marine monitoring, the creation of craft out of waste, protecting ocean birds, and conserving the famous Chacma baboons of the peninsula.

Half of the annual retainer will come from the city’s Environmental Resource Management Unit, and half from the Solid Waste Department.

Soetwater already has its own full-time conservation official, a post that was filled in 2008.

A number of improvements have been made since the end of the year, according to the city. The boat ramp has been upgraded and more informative signage has been put up. KEAG has cleared a substantial amount of alien vegetation and human refuse, and reportedly has the landfill site well under control.

The Soetwater conservancy will provide at least 2 000 days of employment a year.

The institute says that there are only about 5 000 birds left in the wild, of which about 75% live along South African coasts – some as far as the Eastern Cape. The rest occur along ’s rugged coast up to the northern region of that country.

The species is classified as near-threatened by the International Union for the Conservation of Nature’s Red List.

The bird breeds on the coast from November to March, laying its eggs in hollows scratched out of the sand. However, increased human traffic during this peak summer period means that many eggs are destroyed and hatchlings die.

In recent years the programme has brought greater understanding of the birds’ movements and conservation needs. The institute has appealed to the public to be extra careful during breeding season by avoiding nests protected by agitated parent birds, controlling their dogs and spreading the word to others.