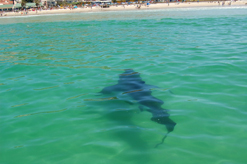 In summer white sharks regularly swim
close to swimming beaches in Cape Town,
but are not usually a threat.
(Image: Enrico Gennari and Alison Kock) 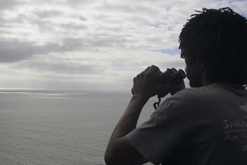 Sharkspotter Eric Myeko keeps a careful
eye on the beach from the vantage point
of Boyes Drive.

What is it about sharks that frightens people more than more common hazards? There are those who will not enter the sea for fear of sharks, but will blithely cross busy intersections, travel in rush-hour traffic, and drive long distances between cities. They even sit in chairs and toast bread for breakfast. And statistics show that these activities are far riskier than swimming in the ocean.

Perhaps people are afraid of the things that make big headlines. Car accidents are commonplace – and as for the toasters and chairs, in 2005 chairs killed 652 people and toasters 791, while only 9 people were killed by sharks worldwide. That’s according to the Rethink the Shark Campaign, a joint venture between Cape Town’s Two Oceans Aquarium, AfriOceans Conservation Alliance and Save Our Seas.

According to Pat Garret, managing director of the Two Oceans Aquarium, there has been an average of one serious shark attack a year and one fatal shark attack every 2.3 years over the whole South African coast for the last 40 years. And, he adds, shark attacks only occur in deep water; there is no record of anyone being bitten by a shark in the surf zone.

Not one person was killed by a shark in South Africa in 2008 – but the figures for toasters and chairs are not available.

Perhaps it’s simply a matter of bad PR. The perception is that sharks mean-eyed, cold-blooded monsters that hide in the deep and only show themselves to wreak havoc on innocent swimmers and surfers.

Well, they’re not. If they wanted to eat people, Muizenberg Beach in Cape Town would be the McDonalds of the shark world. Humans are easy prey, so it is obvious that sharks really are not interested in us. We probably aren’t nearly as tasty as seals.

That doesn’t alter the fact that one shark bite can send ripples of panic throughout coastal communities. And two in a short space of time is cause for a major rethink of recreation habits.

When JP Andrews lost his leg to a shark off Muizenberg in 2004, only a few months after the fatal attack on Tyna Banks at nearby Fish Hoek, the ramifications spread beyond the friends and family of the victims. Surfers – a notoriously superstitious bunch when it comes to dealing with the “men in grey suits” – stayed out of the water. This not only made them miserable, it also impacted on the livelihood of a number of people, one of whom was Patrick “Rasta” Davids.

Davids earned his living as a car guard at the beach. He had developed a good relationship with regular beach users, particularly surfers, and started keeping car keys for people heading into the water.

After the attack, at the suggestion of his longstanding car guarding clients, Davids went up onto Boyes Drive to see if he could spot the sharks close inshore, and let the surfers know when it was safe to go into the water.

“I didn’t know what I was doing,” he says, “but then I met the trek fishermen, and they taught me how to check the sharks.”

Trek fishermen are an integral part of coastal life in the South Peninsula. They stand up on high ground looking for fish and, when they spot a shoal, head down to the sea, where they row out with heavy nets to encircle the fish, returning to the beach where they pull their catch in by hand in the same way their ancestors have done for generations. And these guys know the sea, so they gave Davids his first sharkspotting lesson.

That was the genesis of Sharkspotters, an organisation now in its fifth year.

Someone donated a pair of polarised sunglasses, which made a big difference, and then Gregg Bertish from Clifton Surf Lifesaving Club donated a set of two-way radios in return for getting two of the Clifton lifesavers trained in sharkspotting.

Then they came up with the idea of a flagpole with different coloured flags to indicate the shark status of the ocean. A green flag indicates that the water is clear, and the spotters can see there are no sharks. A black flag means the water is not clear enough for the spotters to be sure there are no sharks inshore. A white flag with a black shark on it indicates that there is a shark close inshore and then, when it has left, the flag is replaced by a red one to show that the danger has passed, but that the shark or sharks may still be close by.

When raising the white shark flag, the spotters on the beach also blow a siren, which warns surfers and swimmers to get out of the water.

The flagpole was erected on City Council property without permission so, once it was noticed, the council made the usual official enquiries.

On hearing the purpose of the flags, they promptly donated about R4.5-million (US$450 000) in funding for five years, and are ready to bankroll the next five years.

The programme is simple but effective. The beaches under constant surveillance include Muizenberg, Fish Hoek and Glencairn, mainly because these have convenient high vantage points from which to observe the ocean. One spotter on the mountain is in constant communication with another on the beach, who controls the siren and flags.

Sharkspotting is run all year in the main sites, but the popular Blue Waters, Mnandi, Strandfontein and Monwabisi Beaches are also included in the December and January holiday season. There are no convenient mountains overlooking these beaches so the observation is from life-saving towers.

“Altogether, there are about 34 spotters,” says Davids. “They work five-hour shifts, either from 8am to 1pm to or 1pm to 6pm. You can’t work longer than that. Your eyes get tired looking at the sea all the time.”

What he doesn’t mention is that the spotters are out there in all weather – blazing sun, freezing wind and icy rain. As long as they can actually see the surface of the sea, they’re on duty.

While sharks are the focus, the spotters see other things, too.

“We see accidents, mountain fires, near drawings and stuff,” says Davids. “And then we report it.”

The spotters make constant notes of their observations, and the resulting data is “incredibly valuable,” according to Alison Kock, a marine biologist with the Save our Seas Shark Foundation based in Kalk Bay.

“They note the seasonal and daily trends not only of sharks, but also whales and dolphins,” she adds.

The programme has reduced shark attacks to exactly zero. “In the five years that the spotters have been operating, there have been no incidents on the beaches involved,” says Davids.

“It’s a brilliant system,” says Kock, “and I would like to see it implemented all around the world.”

The aims of the programme are two-fold. The obvious one is increased safety for beach users, but it creates employment, and the spotters are encouraged to further their education through the programme.

“Most of the guys were unemployed,” says Davids, “and we see a lot of matriculants who can’t find work. So we’ve trained them up, and got them to do further courses.

“All the guys have done first aid courses. And I’ve done a computer course at False Bay College, with the help of WWF. And a skipper’s licence and a driver’s licence, too.” Car dealer Williams Simpson has also donated a pickup truck to the programme.

The spotters also go out in the research boat with Kock when she does her electronic tracking and shark observations.

“It gives them a better understanding of the animals,” she says.

Davids has started doing a tour guide course and, Kock explains, the other spotters are encouraged to go this route, too.

“The tour buses stop on Boyes Drive to chat to the spotters, and to take photographs,” she says. “It’s become a tourist attraction.”