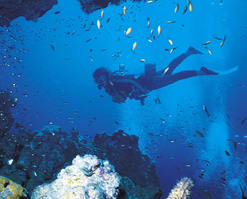 The mecca of South African divers is
Sodwana Bay in northern KwaZulu-Natal,
where extensive tropical reefs lie parallel
to the shore.

South Africa is underrated as a diving destination. Sure, cage diving off Gansbaai is an international crowd puller, and KwaZulu-Natal province’s Protea Banks is on the map of any diver serious about scuba diving with sharks.

But there is so much more, a wealth and variety of marine life in the reefs along the country’s coastline. That said, diving in South Africa is not for the faint-hearted. The water can be cold, the visibility poor, the launches wild and the currents fast. But on a good day diving here is as good as it gets. So go on – take the plunge.

The mecca of South African divers is Sodwana Bay in northern KwaZulu-Natal. The warm waters brought down by the Mozambique Current favour coral development, and extensive tropical reefs lie parallel to the shore. These are unimaginatively named for their distance from the launch site at Jesser Point – Quarter-Mile, Two-Mile, Five-Mile, Seven-Mile and Nine-Mile.

This is where most local divers do their first open-water dives, so there’s a multitude of resident dive schools. If you’ve never dived the KwaZulu-Natal coast expect a fairly hair-raising first boat trip. After you’ve pushed the rigid inflatable boat into the shallows it’s all aboard, life jackets on and feet in the straps ready for an exciting ride through the surf.

You can spend hours searching for unusual specimens such as leaf fish and tiny crustaceans on Stringer Reef, admiring the beautiful table corals and shoals of flame goatfish at Coral Gardens or photographing the wonderful rock and coral topography of Arches.

Anton’s Reef is known for its dense shoals of fish while pregnant ragged-tooth sharks often descend on Quarter Mile between May and December, so you can literally sit on the sand and watch these magnificent creatures cruise overhead.

The further reefs are even more spectacular. At Seven-Mile you’ll see dense, colourful shoals of snapper and baitfish, and at Nine-Mile dramatic green tree coral and resident potato and brindle bass.

When conditions are right, “Breaking Waters” on Nine-Mile is outstanding – you shoot over the shallow reef, though caves and pitch-black tunnels until you see a shaft of light that you fin up to. Keep your eyes peeled for the smaller treasures which the dive masters love to locate – beautiful paperfish, frogfish and nudibranchs. You’ll often see dolphins surfing in the backline on the way to these sites, and more than once we’ve seen whale sharks and manta rays.

There are some specialised courses on offer, including Gypsea Centre’s whale shark programme where you learn about the habits of these gentle giants then head out to sea guided by a spotter plane to snorkel with them. Then there’s Reefteach’s environmental specialties course and Sodwana Bay Lodge’s photographic courses.

Further up the coast Rocktail Bay Dive Centre and Thonga Beach Lodge are the only concession holders on a long and pristine section of reef, so they are able to offer boutique diving at its best.

The second most popular dive venue is Aliwal Shoal, five kilometres off Umkomaas. The shoal is famous for its fast drift dives, awesome topography, colourful tropical fish, beautiful corals and ragged tooth sharks. There are also two great shipwrecks, the Produce and the Nebo, where the stars are turtles and big game fish.

My favourite site is the appropriately named Cathedral, with its magnificent arch and ledges under which all manner of tiny critters hide. Between July and November Cathedral is a popular hangout for ragged tooth sharks, so watch for beady eyes in the shadows.

If you want a really close encounter with sharks join African Watersports on one of their specialised, baited tiger shark dives. Drifting along eyeballing tiger and black-tip sharks is an amazing, almost surreal experience.

Protea Banks is for serious adrenalin junkies and advanced divers only. This rocky reef, eight kilometres off the coast at Shelley Beach, has wonderful arches, caves and pinnacles to explore as well as pretty corals and fish life.

But it’s the sharks that most divers come to see. In winter scores of ragged tooth sharks lurk under the overhangs, while Zambezi sharks are regular visitors between October and May, tigers between April and November, and hammerheads are usually in the area in November and December. Of course, like any animal encounter, it’s hit and miss – particularly as the strong current means viewing is at speed.

The Sardine Run is a major marine attraction all along the south coast during June and July, when visiting dive charters join with local dive schools and operators offering surface viewing for non-divers.

The event, cleverly marketed as the Greatest Shoal on Earth, is a spectacle of diving gannets, leaping dolphins and big predators chasing and munching the oily, silver slicks of sardines that move into the shallow waters at this time. If you’re lucky you might be in the water to experience a baitball, a pocket of sardines rounded up by predators into a clustered group near the surface and then greedily devoured. But be careful out there!

The Western Cape coastline offers a range of dive options from wrecks to kelp forests, seals to tiny nudibranchs, many accessible as shore dives.

The water on the False Bay side of the Cape Peninsula is warmer, and dives on the beautiful boulders reveal wonderful small critters that have macro-photographers snapping away until their lips turn blue. The most famous sites are probably the Smits wrecks, which lie in the picturesque Smitswinkel Bay just outside the Cape Point Reserve. Five vessels, two navy frigates, the SAS Transvaal and SAS Good Hope, a diamond dredger, the Rockeater, and two fishing trawlers the Princess Elizabeth and the Oratava, were scuttled in the 1970s to form artificial reefs covered with psychedelic soft corals, sponges and gorgonian fans.

On the Atlantic side Coral Gardens and Justin’s Caves – underwater wonderlands of bright corals – are great shore dives when conditions are right, while the wreck of the Maori and Vulcan Rock are popular boat dives from Hout Bay.