The Sanlam Cape Town Marathon is the only run in Africa to receive Silver Label status from the International Association of Athletics Federations. It’s also been declared as carbon neutral. The scenic run will take place on 20 September, and organisers hope to reach Gold Label status soon. 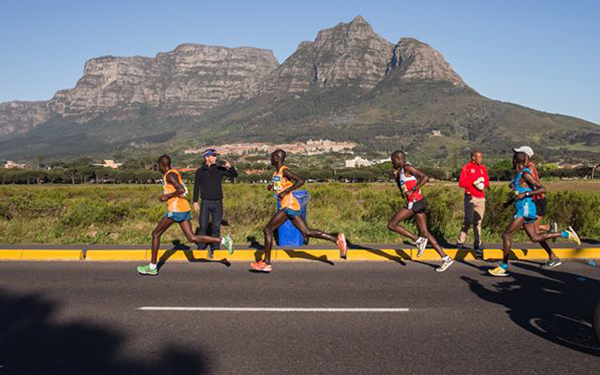 Cape Town is world renowned for its tourist attractions such as Table Mountain and Robben Island.

Now, the Mother City can add another accolade to its growing list: the Sanlam Cape Town Marathon has been granted Silver Label status by the International Association of Athletics Federations (IAAF). The race will be held on 20 September 2015; it is the first race in Africa to receive the status. In addition, it has been declared carbon neutral.

Marathon ambassador Elana Meyer, an Olympic gold medallist, said the organisers were delighted that the marathon received the status. She was proud to be associated with an event that was sustainable, Meyer added.

To receive the silver status, a race has to meet certain criteria, such as having international runners take part in the race running faster times than the IAAF’s guidelines; the race route should be closed to motor traffic; and using full electronic timing to generate the results. The highest level, with the strictest guideline is gold, followed by silver, then bronze.

This means the Sanlam Cape Town Marathon met the international guidelines set out by the IAAF to make the race a world-class event. “The annual event, relaunched last year, achieved the necessary criteria to be listed among 22 road races around the world with second-tier status,” reports the Times Live website.

“The Silver Label status puts the Sanlam Cape Town Marathon on the race calendar for the top tier international runners in 2015,” Meyer said. “We are excited to be planning a spectator-orientated event over the Heritage Day weekend.”

As for sustainability, “the marathon endeavours to benchmark itself against leading international city marathons in order to pioneer and be seen as leaders in sustainability initiatives”, she added.

“The marathon’s three core focus areas are to demonstrate concern for sustainability; to minimise its environmental impact and to maximise engagement of all key stakeholders.”

The IAAF noted the route for the 42.2km run has been designed to offer runners a view of the city’s natural and cultural attractions. “Our fast picturesque route sees you weave through the city centre’s sky-scrapers,” reads the marathon website.

“Past the many masts of the Royal Cape Yacht Club, along the banks of the Liesbeek River, under the shaded canopy of the tree-lined Southern Suburbs, around the historic Rondebosch Common, the world famous Newlands Cricket ground, the President’s residence – Groote Schuur, Africa’s finest tertiary institution – the University of Cape Town, historic District Six, the Castle of Good Hope, the Cape Town City Hall, the Houses of Parliament, the City Gardens, St Georges Cathedral, and the Nederduitse Kerk all beneath the watchful gaze of Table Mountain.” 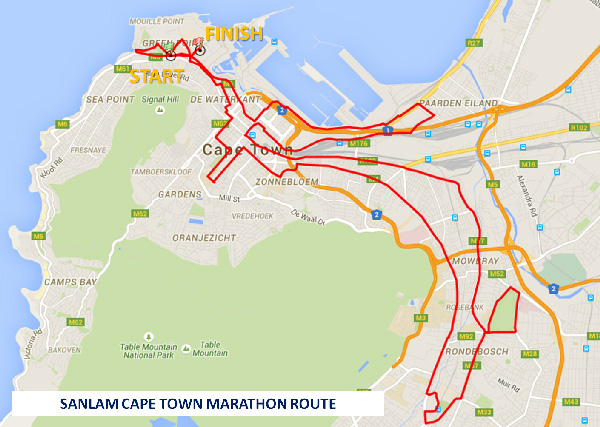 Runners enjoy a scenic view of the Mother City as they run the marathon. Click on the image for a larger view. (Image: Sanlam Cape Town Marathon)

“The bar has certainly been raised quite high and as we launch this year’s event, the organisers have set yet another challenge – the IAAF’s Gold Label status for the Sanlam Cape Town Marathon,” said Carl Roothman, chief executive: retail of title sponsors Sanlam Investments. “We are confident that this will also be achieved in no time.”

Besides achieving that, organisers would like the marathon to become popular all over the continent. “We want this to be the must-run marathon in Africa,” said Janet Welham, a member of the race’s executive committee to news website, Times Live.

“We want it to become Africa’s largest running event and one of the biggest fundraising sporting events in South Africa.”

Runners have showed their excitement on social media, some even sharing their training tips.

Almost time for me and my legs to sit down and have a serious talk on whats waiting for them @ #CTmarathon@elanameyer suuuper excited!! #pb

Great last few weeks of running. Feeling ready for #ctmarathon this weekend. I may have done just enough mileage (long runs) +speed is there

Families and friends supporting their runners, and the public, can also make use of the supporter bus routes.

Are you ready to support the @CTMarathon runners next Sunday? Get onto the FREE Sanlam hop-on-hop-off spectator bus. pic.twitter.com/KUOqO05GNq