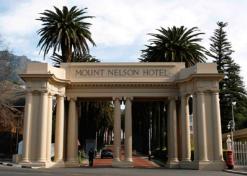 The Mount Nelson Hotel in Cape Town was nominated in the World’s Leading Hotel category.

Hailed as “The Oscars of the travel industry” the World Travel Awards celebrates its 20th anniversary this year and is acknowledged globally as the ultimate travel accolade, rewarding world-leading hospitality brands.

Voting for the competition is online and encourages travel and tourism executives and business and leisure tourists to vote for their favourite destinations, resorts and game reserves, among others.

The World Travel – Africa Awards turns the global spotlight on the continent’s leading leisure and commercial destinations, and sees some African nominees, like South Africa, breaking into international categories.

Up in the air

CEO of Cape Town Tourism, Enver Duminy, comments: “This is another feather in the cap of Cape Town and the Mother City’s tourism offering – right off the back of another accolade in the Condé Nast Readers Choice Awards for 2013.

“This is really good news for Cape Town and its tourism businesses – these awards are great marketing opportunities as they assist in promoting our destination globally and keep the Mother City top of mind among potential travellers.

“I would also like to take this opportunity to congratulate all the winners in the Africa category, particularly those from our home town, Cape Town.”

Graham E. Cooke, president and founder, World Travel Awards said: “We are proud to have held these awards in Nairobi after recent events, to not only show support for the Kenya Tourism Board but Africa as a premier tourist destination that creates jobs and drives a significant part of each country’s GDP (gross domestic product).

“Africa is a very competitive region for our World Travel Awards, and these winners continue to serve as an example of the most luxurious and innovative brands with unique hospitality products and services. Tonight’s recipients strive to set the highest possible bar to raise the standards of excellence in travel and tourism and it has been an honour to hold our ceremony here in Kenya, regarded as one of the most beautiful countries in the world.”