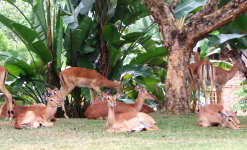 South African establishments took home three first prizes at the 2011 African Safari awards, which were held at Durban’s uShaka Marine World on 6 May 2011.

These first-class establishments were in competition with more than 315 nominees in 21 categories. The awards were judged by a panel of 14 safari experts from independent tour operators in the US, UK, Netherlands, Germany and South Africa.

“With over 3 000 safari lodges, camps and mobile safari operators in Africa, there is a need to differentiate between those that provide an average or bad safari experience, and the few who exceed expectations,” the judges said.

“It is not a question of luxury, but of the safari experience from your arrival on a remote airstrip to the revelation of the wilderness and how it works by the professional safari guide,” they said.

Karkloof Spa, located in KwaZulu-Natal, has a lavish boutique lodge with 16 villas, a first-class spa and 3 500ha of land teeming with wildlife.

No stranger to receiving awards, the spa has previously won a number of awards over the years. In 2010, it received The Good Safari Guide Gala Award for Best Safari Spa.

The year 2009 was a big year for the establishment – it received numerous awards, including the Tatler Spa Award for the Most Exciting New Discovery, the SA Tourism Welcome Award for overall winner for Best Accommodation Provider, the Professional Beauty Award for The Best Hotel/Resort Spa, and the Amarula Best Retreats in Africa Award for Leading Wellness Retreat.

Relais and Châteaux is an exclusive group of 480 of the finest hotels and gourmet restaurants in 56 countries.

SAA is South Africa’s flagship carrier and one of the oldest airlines in the world. Founded on 1 February 1934, the airline celebrated its 77th birthday this year.

SAA is the most experienced carrier in Africa, offering over 20 destinations across the continent. Over the years, the airline has received various prestigious awards for service and innovation. These include Best Airline in Africa at The Skytrax World Airline Awards for the past 10 years, and Africa’s Leading Airline at the World Travel Awards for the past five years.

Ant’s Nest is located on a private game reserve in the Waterberg in Limpopo province in South Africa, and offers an adventurous African safari experience. The Waterberg has a wider variety of unique plants and animals than anywhere else in Africa.

With nominations from over 1 000 luxury travel professionals, and hundreds of travel magazine readers across Africa, these award-winning safaris have proven to be the best in their respective categories.