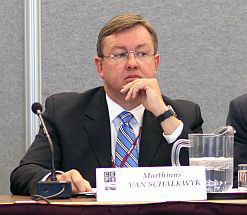 This follows the minister’s acceptance of an invitation issued by the WEF’s executive chairperson, Prof Klaus Schwab.

Although Van Schalkwyk is no stranger to the forum ‒ having been part of the South African delegation at its annual meetings in Davos, Switzerland, for the past two years ‒ he said he was honoured to take up the new position.

“I believe the council plays a vital role in facilitating debate and the exchange of expertise in order to advise the World Economic Council and the international community on emerging issues in the tourism, travel, and aviation sector,” he said in response to his appointment.

“I look forward to the interaction with the other members of the council and our sharing of ideas on issues which affect our industry on a global scale.”

Role of the council

Key tasks of the aviation, travel and tourism industry agenda council include monitoring important trends in the three sectors, identifying global risks and ensuring the accessibility of knowledge and information about the industry.

Council gatherings give industry leaders from around the world the chance to engage with their peers to define and address critical issues. Meetings also help stakeholders identify areas of potential growth and work out ways to drive economic progress.

Van Schalkwyk said the WEF has played a vital role in bringing leaders from the aviation, tourism and travel sectors together and facilitating “forward-looking and inclusive dialogue between key stakeholders”.

But, the main difficulty facing the industry was the belief that the three sectors were unrelated, he said.

The sectors also share many challenges, barriers and opportunities, he said.

“Pertinent issues currently on the global agenda are firstly how travel, tourism and aviation can play a leadership role in the transition to a greener economy and, secondly, how these sectors can contribute to an equitable global trade expansion.”

Van Schalkwyk served as the South African minister of environmental affairs and tourism from 2004 until 2009, after which the departments were split, and he was appointed minister of tourism.

During his tenure he’s been instrumental in the creation of a protection fleet to prevent illegal fishing, brought about a complete ban on the use and production of asbestos, and implemented a Black Economic Empowerment scorecard and charter for tourism.

He was appointed president of the African Ministerial Conference on the Environment in June 2008, when it was held in Johannesburg.

He has also enabled South Africa to become one of the leading countries in UN climate change negotiations, which has seen him gain significant respect in both the developed and developing world.

In March 2010 Van Schalkwyk was nominated by President Jacob Zuma to take up the role of UN climate change executive secretary, following the resignation of Yvo de Boer.

Although the South African minister was one of the favourites for the job, Christiana Figueres, a veteran climate change negotiator from Costa Rica, took up the post in the end.