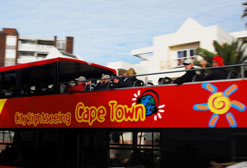 A recent survey by a top US travel magazine has revealed that American tourists rate Cape Town as their third favourite city in the world.

Thousands of tourists participated in Travel + Leisure’s 2008 World’s Best Awards readers’ survey, which placed Bangkok, Thailand, as the top city to visit and Buenos Aires in Argentina as the second favourite.

But numbers show that Cape Town in the Western Cape is not far behind. According to South African Tourism, in 2006 alone the province welcomed 145 211 visitors from the US. This was an increase of 19,64 % from the previous year.

The Americans also voted Singita Boulders Lodge in the Sabi Sands game reserve, adjacent to the Kruger National Park, as the top hotel in the world. Cape Town’s Cape Grace Hotel was placed 22nd in the same category.

The different cities included in the survey were rated on characteristics such as the different tourist sights on offer, cultural and art attractions, eateries and shopping opportunities, and value for money.

The hotels were judged according to the rooms and facilities on offer, where they were situated as well as the restaurants and value of food offered by the establishment.

All the 2008 winners in the different categories will be honoured at an awards luncheon in New York City on 24 July.

Tourism is booming not only in the Western Cape, but in the rest of South Africa too. This is in line with the global trend of all-round growth in the sector.

Statistics released by South African Tourism indicate that foreign tourist arrivals in South Africa reached a record high of 7.4-million in 2006, which represents a 10.3% increase on 2004’s figures and exceeds the estimated 5.5% average global growth rate in tourism.

This figure continued to climb as the number of foreign visitors in South Africa grew by 10% from January to May 2007. This positive trend is reflected in arrivals at airports, which increased by 4,4% during the first five months of 2007 compared with the same period in 2006.