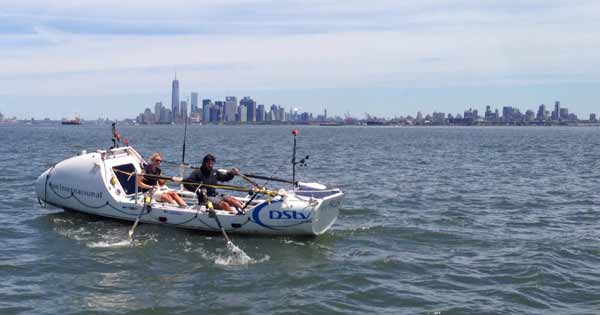 Riaan Manser and Vasti Geldenhuys did the unthinkable in a 133-day quest across 10 765 kilometres of ocean. (Images: Riaan Manser)

South African “oar-some” couple, Riaan Manser and Vasti Geldenhuys, did the unthinkable when they took their Spirit of Madiba on an unforgettable adventure.

Never in her wildest dreams did Geldenhuys think that a simple request for a New York holiday would result in a 133-day quest across 10 765 kilometres of ocean. Manser said he would take her, but that they were going to go his way – by rowing boat. Geldenhuys embraced his idea, through naivety, and the rest is literally history.

Braving torrential storms, blistered hands and food poisoning, the couple tested their 14-year relationship as they rowed from Morocco to Manhattan in a journey that became known as TakeMe2NY. They arrived in New York on Friday night, 20 June, South African time.

Manser explained that when they landed in Morocco they heard about the death of Nelson Mandela and as a small token of gratitude to what he had meant in their lives, they named their boat Spirit of Madiba. They first headed to the Canary Islands and then down to Cape Verde before they hit Barbados. According to Manser’s support team, there was “no support boat, no ablution facilities, no luxury; just Riaan, Vasti, their combined determination and a 7m rowing boat with their supplies”.

The couple intended to row 20 hours a day, taking two hourly shifts at a time. With the huge amount of calories they were burning daily, they replenished with high-calorie freeze dried foods. Other nourishment was supplied by the ocean, and the couple had to catch their own food.

Manser, an adventure junky, and Geldenhuys, a lawyer, mentally and physically prepared for their gruelling expedition by training daily on a stationary rowing machine and spinning bike. This, accompanied by an extensive knowledge of the Atlantic Ocean and their vessel, which became their new home, helped them ahead of the voyage.

“Although we are both very active, taking part in mountain bike races, jogging and swimming, we didn’t do endurance training,” Manser said. “The most difficult part of this trip was not the physical rowing, which was already excruciating on our bodies, but more the mental torture this trip takes you through. You have to constantly convince yourself it is worth it, or that it is going to be worth it. It’s very monotonous and with the same view every day for four-and-a-half months, it’s gruelling mentally.”

Asked how he was able to persuade his fiancée to take the trip, he answered that she “wanted to do something great in her life, something she could be proud of”.

They learned everything there was to know about each other on the expedition. “You spend a lot of time together. We have been in a relationship for more than 14 years so we know each other pretty well, but one thing we have learned is that arguing about things really doesn’t get you anywhere, that you have to be patient with each other. Being right is not always being happy.” 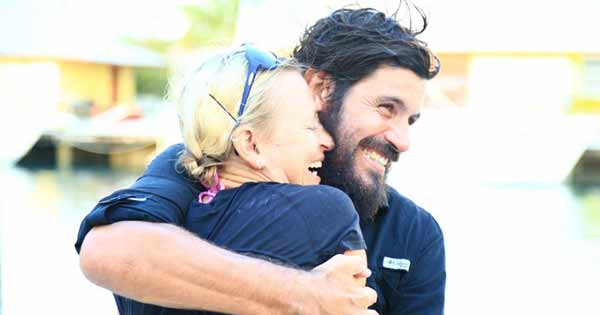 As for how they managed on such a small boat, Manser said: “We often joked about it. We said ‘you gotto wanna’. You got to want to. When times were tough, this escalated to ‘you gotto.’ We knew our journey would not be complete until we reached our destination, New York. So every minute spent on that small space was with a goal. Getting across the Atlantic or getting to mainland USA in Miami would not have been good enough. Getting to New York was our goal.

“We also realised that you don’t need much space. The ‘bathroom’ was outside and the kitchen, bedroom, living room, closet etc was our 1.5m by 1.5m space inside the cabin.”

He explained: “The worst times were when our boat was capsized by a 7m wave while we were rowing.” Geldenhuys was stuck underneath the boat; Manser was thrown into the ocean and had to swim back to the boat. Another time, Manser drifted away from the boat while trying to film. There was no way the boat could have been stopped or turned, so he had to grab on to a fishing line and be reeled in.

“The 900-foot container ships bearing down on us, and with some near misses, provided for some near heart-stopping moments.”

Manser is no stranger to adventure. He has cycled 37 000 kilometres through 34 countries, covering the perimeter of Africa. This achievement earned him the title Out There Adventurer of the Year 2006 and led to his book, Around Africa on my Bicycle.

TakeMe2NY was his fourth world-first expedition. In July 2009, Manser paddled 5 000 kilometres in 11 months in a kayak around Madagascar. He was alone and unaided. During this adventure, he was imprisoned and held captive by rebels.

His travels then took him to Iceland, where he paddled 2 300 kilometres around Iceland with Dan Skinstad in a double sea-kayak over a five month period in March 2011. “We always knew that we would have delays during the winter due to bad weather, but we could never have predicted how long we would be delayed,” Manser explained.

He has also climbed Mount Kilimanjaro and descended to Lake Assal, the highest and lowest points on the continent. The Explorer’s Club in New York – whose members include the first man to reach the North Pole, the first to reach the South Pole, the top of Everest, the deepest point in the ocean and the first man on the moon – extended a special invitation to Manser to speak before its illustrious organisation.