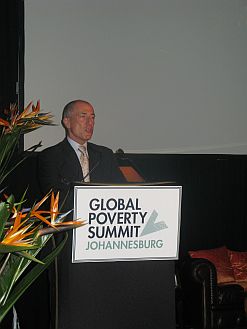 Rory Brooks is the founder of the Brooks
World Poverty Institute which researches
methods to reduce and eradicate poverty. 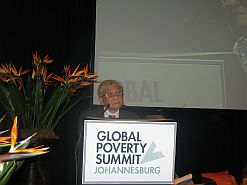 Professor Walden Bello is a member
of the Philippine House of Representatives
and led the discussion on the framework
of the MDGs. (Images: Ray Maota)

The inaugural Global Poverty Summit has given experts in global poverty reduction a platform to deliberate on ways in which poverty can be alleviated throughout the world.

The summit was held at Turbine Hall in Newtown, Johannesburg, from 17 -19 January 2011 and is the brainchild of businessman Dr Rory Brooks of the Brooks World Poverty Institute (BWPI), based at the University of Manchester.

At the summit, 50 experts on the subject of poverty discussed whether the World Trade Organisation’s Doha Development Agenda talks will be able to reduce poverty in developing countries.

Also on the agenda were the Millennium Development Goals (MDGs) of the UN Development Programme. These are a set of goals endorsed in 2000 by nations around the world in an attempt to reduce global poverty by 2015.

Brooks said: “Over the last decade, the plight of the poor has come under the microscope and talking about ways to reduce it, is the first step to its reduction.”

He added that when funding research into global poverty eradication strategies, it’s vital that the research is able to go on and influence policy, which ultimately produces improved outcomes.

“This is why we felt it was important to support this Global Poverty Summit in Johannesburg,” he said.

BWPI research director Rorden Wilkinson said: “Johannesburg is a good example of the stark inequalities within the city. That’s why we chose to host the summit here.”

Speakers at the summit included Nobel economics laureate Professor Joseph Stiglitz; Dr Supachai Panitchpakdi, secretary-general of the UN Conference on Trade and Development; and David Hulme, professor of development studies at the University of Manchester.

In 2000 world leaders signed the Millennium Declaration from which eight MDGs were drawn. Leaders accepted collective responsibility to reduce poverty in their own countries as well as globally.

“The MDGs have been a success because they have provided the moral underpinning and have catalysed collective action,” said Hulme. “It is vital that we all continue to strive to meet the targets set out in the MDGs, but the MDGs represent a bare minimum of what needs to be done to reduce poverty and halt the growth in inequality.”

At the summit, delegates reached a consensus that for MDGs to succeed, especially in Africa, it was necessary to establish national plans specific to individual countries.

Discussing the impact of the Doha round of talks on food security, delegates endorsed a proposal that countries should have the right to implement measures to combat food price volatility.

“The Doha Development Agenda negotiations started a decade ago but they have yet to bring any meaningful contribution to reducing poverty,” said Stiglitz. “It is time to bring the talks to a close, but successfully doing so requires courage and sacrifice by the rich countries. They’ve got to accept that they are going to have to pay for the change.”

Wilkinson said: “No industrial country got to where it is today without significant state intervention. Global trade negotiations need to recognise this reality.”

The delegates also came to the conclusion that trade rules cannot be applied equally to rich and poor countries, but that there should be provision for countries at different stages of development.

Other topics under discussion included intellectual property rights and agriculture.

Established in 2006, the Brooks World Poverty Institute is based at the University of Manchester, where Rory Brooks graduated in 1975 with a bachelor’s degree in management sciences.

BWPI founder Brooks also runs MML Capital, an investment firm which has invested over US$1.4-billion (R9.8-billion) in more than 70 emerging companies across Europe and the US.

Brooks and his wife Elizabeth support various causes, including the Institute of Cancer Research in London.

BWPI aims to create and share knowledge that will help eradicate poverty and inequality in the North and South; and to bring about change in international policies that foster poverty.