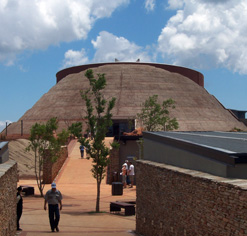 Maropeng, the new state-of-the-art
visitor’s centre in the Cradle of
Humankind, is designed to look like an
ancient burial mound.
(Image: Mary Alexander,
MediaClubSouthAfrica.com) 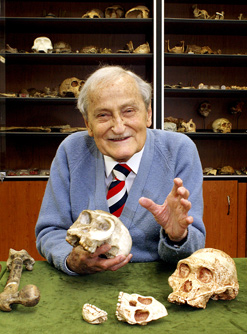 I recently spent a week in the Magaliesberg near Johannesburg and, having most of the day free before a flight from Lanseria Airport, suggested to my companions that we visit the Cradle of Humankind. With the ensuing enthusiasm both loud and unanimous, we reorganised our transport arrangements and spent the better part of a day communing with our ancestors and exploring our roots.

Declared a Unesco World Heritage site in 1999, the 47 000-hectare area is the richest hominid fossil site in the world. It was here, at Sterkfontein Caves in 1947, that Robert Broom found a hominid fossil skull that he named Plesianthropus transvalensis. Assumed to be female, the find became affectionately – but inaccurately – known as Mrs Ples.

Plesianthropus means “near-human” but, after a careful study, Mrs Ples was found to be of the same species as the Taung Child, a fossil skull found in 1924 and named Australopithecus africanus, meaning “southern ape of Africa”. In all, the Sterkfontein Caves have so far yielded about 500 specimens of A africanus, dating from about 2.8- to 2.6-million years ago.

The name Plesianthropus would have been totally forgotten had it not been for that rather nice nickname. And to add to the confusion, it is now thought that Mrs Ples was not a mature female, but an adolescent male.

“She” remains one of the most famous fossils in the world, and her discovery rocked the international palaeontological community and helped revise the then-accepted view of human evolution. But she is in the process of being outshone by a newer and more complete find.

The fossil named Little Foot may be the new kid on the block, but is a much older specimen, dating to about 3.3-million years ago.

Discovered in 1997, Little Foot is still in the process of being painstakingly freed from the compacted breccia in which it has been embedded for over 3-million years. It will probably be another two years before the fossil can be extracted, as visitors are treated to the sound of dental drills resonating within the cave structure – an unexpectedly musical sound.

It is thought that Little Foot is a new species of Australopithecus – related to Mrs Ples, but not too closely.

Although only one is open to visitors, Sterkfontein has a number caves, part of a network of interlinked limestone cavities that stretch for hundreds of kilometres underground.

When I first visited Sterkfontein in the mid-1980s, the site offered little more than the visitor’s cave itself and a small and neglected field museum. Today it is a very different place.

The cave itself hasn’t changed much: the steps are more even, the paths are coated with non-slip material, and the tour had been extended to exit at a different opening – unlike the in-and-out tour of the 1980s.

But the museum has been totally transformed. Gone are the dusty black-and-white photos and handful of fossilised bones in fly-specked display cases, replaced with life-size sculptures of the hominids, large colour photographs and fascinating multimedia displays, all helping to explain the caves’ history and significance.

If you’ve never visited Sterkfontein, you may have visions of “cavemen” who lived in its dark and gloomy depths. But the Australopithecines didn’t live in the caves – they died there.

Many of Cradle caves are deep and relatively inaccessible, and it is thought that most of the bones found there were dropped into the cave by predators.

Picture this: a prehistoric sabre-toothed cat easily kills a small and vulnerable two-footed hominid, hauls the body into the branches of a tree – as modern-day leopards do – and slowly dismantles the skeleton as it feeds over the next few days.

Scored with tooth marks, the bones drop from the tree, tumbling to the shaft of a deep cave. There they collect in a pile and are mixed with small stones and sand. Dissolved limestone drips onto the pile, slowly turning the debris into a rock called breccia.

In other places, predators – either sabre-toothed cats, or giant primitive hyenas – may carried their prey into the cave.

While early hominids are likely to have lived across all of southern Africa, it is only here, in the Cradle of Humankind, that this unique combination of conditions preserved their remains as fossils for us to find millennia later.

From Sterkfontein we headed off to Maropeng, the state-of-the-art Cradle of Humankind visitots’ centre opened in 2005.

From a distance Maropeng – which means “returning to the origins” in Sesotho – looks like an ancient burial mound. But inside it’s a wonderland of interactive displays – part museum, part playground, part amusement park.

We were a pretty diverse group – with the youngest 12 and the oldest 74, and spanning a range of cultural and educational backgrounds – but we all had fun.

I may sometimes have the mental age of a 10-year-old, but I wasn’t the only one to absolutely love the underground boat ride, a multi-sensory trip back in time from the present.

We shivered in the ice ages, wondered at the sound and sight of tectonic plates shifting in front of our eyes, and shuddered at the smell of fire and brimstone as we sailed into the fiery origins of the earth. Then we had our minds played with a bit as we spun out through a simulated black hole.

We’d been shaken up a bit and were quite ready to question our place in the universe, so it was a good introduction to the interactive displays.

With their interactivity making them feel like games, the displays helped us explore what makes us human – our bigger brains, our use of tools and of fire. In fact, the earliest evidence of the intentional use of fire is also in the Cradle of Humankind, at a cave called Swartkrans.

We spoke to a dodo on the phone, threw a couple of genetic dice, played with designing ancient animals and generally all reverted to the wonder of childhood.

The exhibits then took us to the future, examining the consequences of global climate change, overpopulation, declining resources and environmental degradation. Will we join the dodo and dinosaurs, or will we wake up and use our big brains, marvellous thumbs and technological abilities sensibly?

Do you have queries or comments about this article? Email Mary Alexander at marya@mediaclubsouthafrica.com