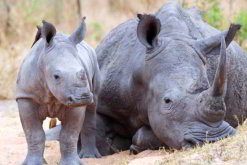 This white rhino and her calf may soon
find themselves on the poaching blacklist,
if Ed Hern of the Rhino and Lion Reserve
has his way.
(Images: Luke Harwood)

South Africa lost at least 19 rhinos within the first half of 2010. The situation is so critical that the South African National Defence Force has been deployed in various national parks in an effort to curb poaching.

Now, rhinos have been equipped with the means to fight back. Ed Hern, owner of the Rhino and Lion Reserve in Kromdraai, near Krugersdorp in Gauteng, has come up with a plan to make the much-coveted horn less palatable.

Hern caused controversy in 2010 when he was quoted as saying: “We need to try poisoning the horns with something like cyanide so when someone uses it for medicine they will die. I have started testing with a vet.”

Not willing to be held responsible for murder, and on the advice of conservation body Endangered Wildlife Trust, Hern moderated his stance. Since then he’s been experimenting with non-lethal, but unpleasant ingredients to inject into the rhino horn in a desperate attempt to stop the butchering.

The cocktail has been fine-tuned and tested in animals that were injected over 12 months ago and have shown no ill effects – only humans are affected.

On 7 September the reserve’s Rhino Rescue Project announced that it will go ahead with injecting its chemical mixture into more horns. The news has been welcomed ahead of World Rhino Day on 22 September.

The mixture consists of certain ectoparasitacides, that is, drugs that are designed to kill parasites that live on the exterior of the host.

While the formulation is not lethal – which has prompted another storm of online comments from angered rhino supporters who would like nothing more than to see culprits slain – it will cause reactions such as convulsions and severe headaches.

Add to that a neon pink dye, impossible to remove or alter, that will make the horn visible on airport x-ray scanners, and allow authorities to make arrests on the spot.

Hern said in a statement: “A permanent solution would be to eliminate the demand for rhino horn altogether.”

He added that education is key in convincing consumers – who come mostly from the Far East – that rhino horn contains no nutritional or medicinal value.

But with 90% of rhino numbers decimated in recent years, a drastic and immediate strategy is called for, and Hern believes his strategy can offer this solution. The treatment, which lasts three to four years, will also keep parasites away.

While some feel that the tactic won’t work on big reserves with large numbers of animals, such as the Kruger Park, it could be effective in private reserves which have only a handful of rhinos.

By the end of 2010, more than 330 rhinos had been poached in South Africa alone. This is the highest number of deaths ever recorded.

The International Union for the Conservation of Nature noted in 2009 that around 12 rhinos were poached in South Africa and Zimbabwe every month. By comparison, statistics showed that in other rhino territories such as India and Nepal, the toll in six months was 10 and seven respectively.

Although gains have been made because of dedicated conservation efforts, especially in South Africa, the rhino population is not large, with three of the species listed as critically endangered.

The magnificent animals face a very real possibility of extinction as levels of poaching increase.

Killed for their horns

The rhino, from the Rhinocerotidae family, occurs as five species. Two of these – the white and black rhino – are native to Africa, while the Indian rhino, Sumatran Rhino and Javan Rhino are native to Asia. The latter animal, one of the most engandered in the world, has the lowest population count of all the species, with just 50 individuals still alive.

The much-prized horns are simply compressed keratin, a protein also found in hair and fingernails, and have no medical value. But this has not stopped people through the centuries from seeking it for ornamental or medicinal purposes.

The ornamental use of rhino horn dates back to at least the seventh century AD, and today is used for this purpose mostly in Middle Eastern countries such as Yemen, where it is carved into elaborately designed knife handles.

Many Asian countries believe that rhino horn not only cures ailments, but also acts as an aphrodisiac. This has never been scientifically proven.

It is because of these erroneous beliefs that hundreds of rhinos are poached every year, and the number is climbing. Rhino horn has been known to fetch up to R430 200 ($60 000), per kilogram.