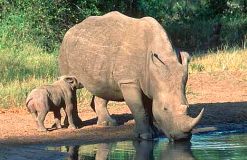 Water and Environmental Affairs Minister Buyelwa Sonjica has announced the formation of a new special investigations team dedicated to the eradication of rhino poaching. This will help safeguard one of ’s most enduring tourist attractions, its wildlife.

The initiative could not have come sooner. Horrifying statistics show that since January 2009 84 rhino have been killed by poachers in provinces across . A breakdown reveals that the world-famous is the country’s poaching hotspot, with KwaZulu-Natal’s rhino-rich nature reserves not far behind.

The current poaching statistics are as follows:

Sonjica made the announcement at a September 2009 meeting between herself, deputy environment minister Rejoice Mabudafhasi and various members of the executive council (MEC) from the provinces. The meeting was held to discuss new strategies to fight the recent spate of rhino deaths.

The new unit is expected to tackle not only poaching, but other high-priority and organised environmental and conservation crimes. It forms part of an integrated anti-poaching strategy in which the Department of Environmental Affairs is working closely with all provinces where rhino are found.

Experts hope that the unit will function in much the same way as the former Endangered Species Protection Unit of the South African Police Service. From 1989 until its disbandment in 2003 this elite unit was responsible for wildlife crime investigation and notched up great successes in its fight against international trade in endangered species.

During the meeting the delegates discussed ways of supporting the anti-poaching initiatives of various conservation authorities around the country.

The national parks authority, South African National Parks (Sanparks), is to lead a task team of conservation agencies from all provinces, with the aim of coordinating their efforts.

Earlier in the year, as part of the integrated strategy, the Department of Environmental Affairs established a national biodiversity investigators’ forum in its Biodiversity and Conservation branch.

This initiative enables the coordination of biodiversity-related law enforcement work, such as the efforts to stamp out rhino poaching, and will help authorities enforce national environmental legislation.

While poaching is still rife, the ongoing war against poachers is proving fruitful. Sanparks recently announced that it would channel US$260 000 (R2-million) from the Parks Development Fund into providing an additional 57 game rangers in the and equipping them with motorbikes, enabling them to cover their patrol areas more efficiently.

The funds will also provide for the installation of a hi-tech crime information management system. Sanparks hopes that these new developments will give it the edge over would-be poachers.

A further blow to criminal activities is the return of the South African military to patrol the vulnerable 450km national border between and , in the east of the park. Military patrols along the border stopped three years ago.

All 33 poached rhinos in the were killed along the eastern border, said Sanparks.

“We intend to increase our efforts even more in ensuring that this scourge is routed out,” said Sanparks CEO David Mabunda. “Discussions have been started with Mozambican authorities to solicit their assistance in apprehending suspects and preventing illegal activities from proliferating on their side of the fence.”

During 2009 at least 14 poachers, all of Mozambican origin, have been arrested and several illegal firearms seized in the . Altogether, 22 poachers around have been taken into custody since the beginning of 2009.

In , which has also seen a surge in the number of rhino deaths, several suspects have been arrested in recent months. By late September 2009 the province had lost 19 rhino to poachers, 15 in areas managed by Ezemvelo KZN Wildlife – formerly known as the Natal Parks Board – and four in private reserves.

A report released in July 2009 by the World Wide Fund for Nature, the International Union for the Conservation of Nature, and wildlife trade monitoring network Traffic, says that illegal international trade in rhino horns is almost at a 15-year high.

But is sending out a stern warning that it will not tolerate this unlawful trade: “Poachers must beware, because we will seek them out, we will find them and they will be dealt with. This is a war that we plan on winning,” Mabunda said.