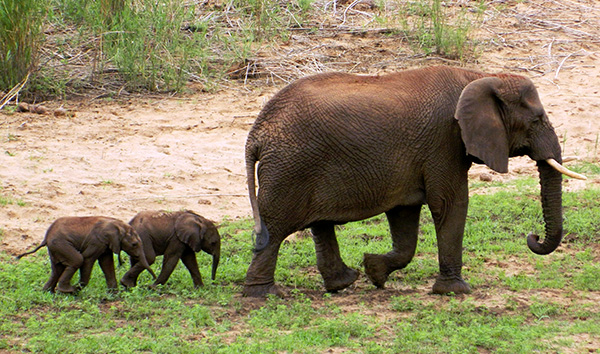 The elephant cow Curve with her newborn twins, yet to be named, in Pongola Game Reserve.

• The Devil’s Pool: A swim at the edge of the world
• So this giraffe walks into a restaurant … and the video goes viral
• South Africa’s national parks
• Elephants get their day
• South Africa’s elephant Norms and Standards to be amended

Pongola Game Reserve, a 7 200-hectare big-four game reserve in northern KwaZulu-Natal, reported the birth of African elephant twins in early December. Scientific evidence suggests that twins result from under 1% of elephant birth – making this an extremely rare event. There is even less chance of both twins surviving to adulthood.

Elephant specialist Dr Ian Whyte of the Kruger National Park says the chance of African elephant twins being born may be as low as 0.5%.

“Though a few cases of twinning have been reported in the Kruger National Park, an examination of the reproductive tracts of over 1 200 adult cows culled in the Kruger National Park during population control operations did not yield a single case of twins,” he says “An earlier study published by Smuts in 1975 found two sets of twins among 353 embryos examined which is a 0.5% prevalence.”

In humans, the prevalence of twins can rise as high as 5% – five out of every 100 births – although the average is somewhere nearer to 3%.

The as-yet unnamed twins were born to a 31-year-old elephant cow called Curve, named for the curve of one of her tusks. Before the twins she had already produced three calves, all male. 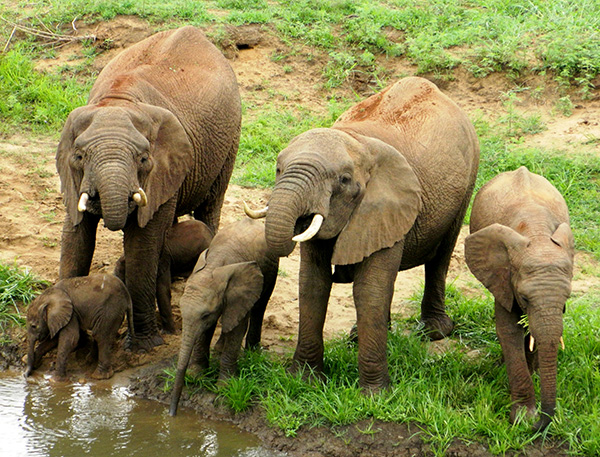 The twins, at left, shelter under their mother at a watering hole.

Paternity tests suggest the twins’ father to be a 44-year-old elephant bull, who died just over a year ago. (African elephant pregnancies last some 645 days – around 22 months.) The sex of the twins remains unconfirmed, as park rangers want to give them space to grow and beat the mortality odds for elephant twins.

“This is the best approach,” Whyte says. “Mortality of one of the twins usually occurs as the increasing demand for milk by two calves cannot be met by the mother and the less dominant of the two calves usually cannot gain access to its share. 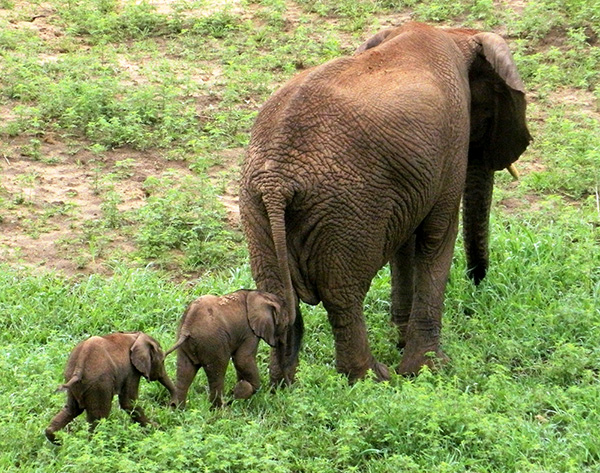 Since 2008 Pongola Game Reserve has had well-established measures to keep the elephant population stable. These include vasectomies as well as gonadotropin-releasing hormone, to ensure the number of elephants to not exceed the food resources available. With enough to sustain them, and given their safe birth, the twins have a good chance of living long and healthy lives.