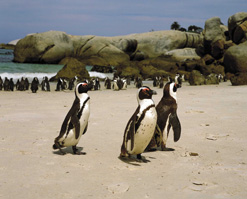 African penguins are not restricted to
Boulders’ breeding beach. They often
hang out on the main swimming beach
where they can waddle down to the sea
and bob about in the calm, protected
water, checking out the tourists.
(Image: South African Tourism)

Cape Town’s Boulders Beach, part of the Table Mountain National Park, is home to a much-photographed, much-loved and much-maligned colony of African penguins. Previously called Jackass penguins because their raucous cry resembles the sound of a tortured donkey, these flightless birds have not always had a good relationship with people – and they’ve almost invariably come off second best.

Ever since the first European ship sailed its tentative course around the Cape to the fabled spice islands of the east, penguins and penguin eggs have been sought-after additions to the decidedly unimaginative menu of inadequately fed seamen – and they didn’t have to work hard for their supper.

Like their less fortunate cousins, the flightless dodos that were hunted to extinction on Mauritius in probably the mid-17th century, penguins were easy prey. But unlike the dodos that really were sitting ducks wondering aimlessly around the beaches nibbling on fruit, lazing in the sun, and waddling trustingly up to predatory humans, penguins can swim. And it is probably this – and the fact that they have a healthy natural distrust of all other life forms – that saved them from the fate of the dodo.

While the penguin colonies were initially plundered solely for their eggs and meat by hungry sailors, it wasn’t long before European industrialists realised the immense value of guano – bird droppings. Before the age of synthetic chemical production, guano was the principle ingredient of the fertilisers essential to the expanding agricultural economies of Europe and the Americas.

And don’t let the word “droppings” fool you. Penguins had been roosting on offshore islands for years and years and years, so we’re not talking about a few little blobs here and there. The accumulation of guano was enormous. On Ichaboe Island, off the coast of Namibia, it was estimated to be about 27m thick.

That was before the guano rush – a surge of maritime fortune hunters more ruthless, tougher, and infinitely more smelly than any badlands diamond or gold prospector in 19th-century Kimberley, Johannesburg, California or the Klondike.

At the peak of the rush between 1843 and 1845 there were up to 460 boats anchored off the tiny island, heaving around and dragging their anchors in the wild and exposed Atlantic Ocean. Every day about 6 000 rough, bearded men fought each other for the best digging sites, swinging shovels and picks at anything that got in their way.

It would seem that penguins could quite happily do without their waste, but all that guano has a purpose – it’s where the birds make their nests. They dig deep into the soft, yielding guano to form cosy burrows sheltered from the boiling sun, and incubate their two eggs, of which only one usually survives.

Penguins mate for life, so these are not temporary digs: monogamous pairs usually return to the same burrows year after year. So the destruction of the guano was the destruction of the penguins’ homes. Not to mention the simultaneous robbing of nests and wholesale slaughter of adult and juvenile birds to feed the rapacious mob of miners.

The guano rush didn’t last long, but it was enough to destroy the once-perfect habitats of Ichaboe, the nearby Neglectus Islet, and almost every other island breeding site of any significance.

That was the 19th century, but for most of the 20th century African penguins faced entirely different threats. Declining fish stocks due to overfishing made it increasingly difficult for the birds to find food.

Penguins are spectacularly good swimmers. Using their flippers – which in other birds would be called wings – they glide through the water easily maintaining an average speed of about 7km an hour for up to 100km in a single fishing trip. They regularly dive to depths of about 30m in search of prey, but can go to over 100m if they need to. And with a little shot of adrenaline courtesy of a hungry shark or seal, or a rapidly escaping anchovy, they can reach speeds of anything between 20km to 25km an hour.

With competition from commercial fishing vessels, penguins have to work much harder for every fish. And if that wasn’t bad enough, the 20th century had something far more deadly to throw at the beleaguered little birds – oil.

Passing tankers and other ships that succumb to the notoriously stormy oceans off southern Africa leak thousands of tons of oil into the oceans, onto beaches and on offshore islands. Once a penguin has swum through that oil its feathers lose their natural insulation and waterproof coating, and the bird can’t swim. And if it can’t swim it can’t fish, so it stands around on the shore, shivering with cold, and starves.

Luckily, most people find penguins utterly engaging so, when they are threatened, as happened in 2000 with the sinking of the MV Treasure off Melkbosstrand, there is help at hand. On that occasion, thousands of Capetonians of all walks of life volunteered anything from a couple to a couple of hours to a couple of days a week for 10 weeks to care for injured, oiled and sick penguins. In all, over the 10-week period volunteers worked 45 000 shifts, most of which were cold, strenuous, wet and uncomfortable.

Even more heartening that the penguins themselves are taking steps to ensure their survival – holding their future firmly in their own two flippers. In 1983, an adventurous breeding pair found a really nice little beach, called Boulders, near the coastal suburb of Simons Town in Cape Town, and set up home. The word seemed to have spread, and over the next few years more and more penguin couples came to nest on or near Boulders Beach.

There was no thick layer of guano in which to burrow, but there were convenient bushes under which to scrape out shelters they eventually turned into cosy nests. Some penguins found fantastic nesting sites in suburban gardens – with varying degrees of welcome. Some residents were delighted to have these lovely birds on their properties, while others found their incessant braying and, of course, laying down of a good guano base not conducive to a happy home and immaculate garden.

That may seem picky, but those first few pairs of penguins have now grown into the thousands, and can do a lot of damage to a nice garden – and set up quite a noise and quite a smell. As the conflict between homeowners and avian residents hotted up, the local human community broke into two distinctly opposite camps – pro-penguin and anti-penguin.

The impasse was settled when South African National Parks stepped in and incorporated Boulders into the Table Mountain National Park. The penguins now have their own breeding beach, the residents have fences to protect their gardens, and tourists have a visitor’s centre, comfortable viewing platforms and boardwalks.

The penguins are not restricted to the breeding beach. They often hang out on the main swimming beach where they can waddle down to the sea and bob about in the calm, protected water, checking out the tourists. They wander through the car park, they’ve colonised nearby rocky coves, and they delight passing kayakers and other boaters as they swim out to sea in small groups, their tidy black and white bodies undulating through the water with graceful ease.

A visit to the Boulders Beach penguins is an obligatory stop on any tour of Cape Town, and fits in well with a visit to Cape Point.