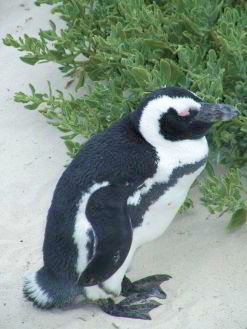 The Boulders Penguin Sanctuary, situated
in Simon’s Town on the Western Cape
coast, is an important conservation
site for the African penguin.
(Image: Wilma den Hartigh) 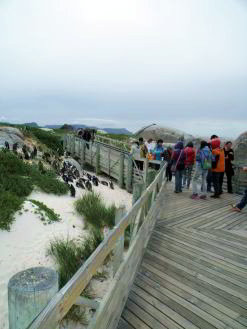 The Boulders Penguin Sanctuary, situated in Simon’s Town on the Western Cape coast, is an important conservation site for the vulnerable African penguin.

The Boulders Penguin Sanctuary, which forms part the Table Mountain National Park (TMNP), has become a safe haven for the African penguin, now listed as vulnerable in the Red Data Book of threatened species.

Foxy Beach at Boulders has become internationally known as one of the few sites in South Africa where penguin enthusiasts can view the aquatic birds at close range, in the wild.

Thanks to various conservation efforts to protect the future survival of the African penguin, the population of this particular species has increased through natural breeding and local migration from surrounding island colonies.

Boulders has seen an increase in breeding pairs from only two in 1982, to 3 000 in recent years.

Providing a safe breeding environment for penguins is critical for the birds’ future survival as it’s the only species of penguin that breeds in Africa.

Monique Ruthenberg from South African National Parks (SANParks) says although Boulders was outside the Cape Peninsula Protected Natural Environment, it was such an important penguin breeding ground that it warranted inclusion into the SANParks family.

SANParks decided to incorporate Boulders into the TMNP in 1998.

Saving the penguin from extinction

The African penguin has faced the risk of extinction over the past 80 years, suffering a greater decline than any other penguin species. Of the estimated 1.5-million African penguins in 1910, only about 10% remained at the end of the 20th century.

The decline of the African penguin dates back to the first Dutch settlement at the Cape in 1652. Penguins were an important source of food and their eggs were regarded as a delicacy well into the 20th century.

More recently, competition with commercial fisheries for anchovies and sardines, the penguins’ main source of food, has contributed to their decline.

According to the Earthwatch Institute, oil spills and illegal dumping of excess oil from tankers also threaten their survival. Penguins rely on their feathers for insulation, and when they become covered in oil, they unable to keep warm.

Ruthenberg says that numerous conservation efforts have contributed to a steady increase in the number of penguins at Boulders. Today, it’s home to about 2 100 penguins.

“SANParks has simply been ensuring that penguins are protected and that disturbances and threats to the birds inside the park are minimised as far as possible,” she says.

Three boardwalks, constructed in between coastal bush, allow visitors to observe the penguins at close range. The first boardwalk was built when the park was established in 1998, the second in 1999 and the third in 2006. A fence was also constructed to prevent the birds from wandering inland.

An information room at Boulders, efforts of tourism and law enforcement officers as well as environmental education and awareness programmes are also putting a spotlight on the birds’ plight.

Ruthenberg says that Simon’s Town also hosts a Penguin Festival every year to raise money for the Southern African National Foundation for the Conservation of Coastal Birds (Sanccob), an organisation that rescues penguins from oil spills and other disasters.

The organisation is funded by membership fees and public donations, and has been scientifically proven to be the most successful sea bird rehabilitation centre in the world.

Other research initiatives are also looking to find ways to protect the African penguin from extinction.

The South African Penguins research project, based at Robben Island, is using technology to monitor penguins.

Robben Island is home to the third largest African penguin colony in the world, with about 6 000 breeding pairs in residence on the island.

The Earthwatch Institute reports that as part of the project, penguin enthusiast Dr Peter Barham, a polymer physicist at Bristol University in the UK, is developing and conducting field-testing of hi-tech silicon bands, used as tagging devices on Robben Island’s penguins.

The use of silicon bands is part of a long-term study of African penguin productivity. If the bands are successful, scientists hope to make them available to penguin researchers.

In the past, steel tags were attached to the upper part of the penguin’s flipper, but research revealed that silicon tags are less intrusive for the birds.

Silicon tags are designed to prevent feather wear, reduce drag when penguins are swimming and decrease the chances of penguins becoming entangled in bushes.

Unlike the metal tags, the silicon material is flexible and penguins have a better chance of freeing themselves.

One of Barham’s students is also testing new “computer-aided pattern recognition” technology. This will enable researchers in the field to identify individual penguins by unique spot patterns on their chests, which would remove the need for banding penguins.