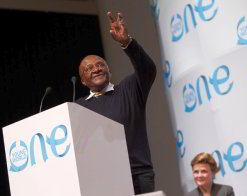 After months of toil Johannesburg has bagged the global One Young World Youth Summit in 2013, it was announced on 3 September.

The city was shortlisted as a contender for the role of host together with Pittsburgh in the US, but both cities came up trumps. Pittsburgh will host the 2012 conference and Johannesburg will take the reins in 2013.

“We’re thrilled, delighted and ecstatic,” said the CEO of the Johannesburg Tourism Company (JTC), Lindiwe Kwele, who was at the final event of the 2011 summit in Zurich when the announcement was made.

The JTC was responsible for presenting Johannesburg’s bid.

“JTC’s conference and events bureau team has put in so much effort over the past few months bidding for One Young World, and we are so excited to be bringing this high profile event to Joburg in two years’ time,” said Kwele.

Young leaders getting together

One Young World is a platform for today’s young leaders, with the primary purpose of connecting the brightest young thinkers with those in power, thereby ensuring that their concerns and opinions are taken seriously.

Global leaders in various fields, such as Archbishop Emeritus Desmond Tutu, musician Bob Geldof and former UN secretary-general Kofi Annan support the summit and act as counsellors to delegates. Tutu was a speaker at this year’s event, as was British chef Jamie Oliver.

London hosted the inaugural summit in 2010, when 823 delegates from 112 countries came together to debate the issues confronting young people of today. Zurich hosted this year’s conference from 1 to 4 September, with approximately 1 200 delegates from 170 countries.

“Clinching the event for Johannesburg and Africa is so important on so many levels,” Kwele said.

“Africa is the continent which has the largest proportion of youth (20%) – as a demographic component of the population – and it would be significant to host this event on a continent which so many young people call home and which offers so many opportunities and challenges.”

Six resolutions were tabled at the first conference as the most pressing contemporary issues. These were, and remain:

“What One Young World really is, is a brilliant network of extraordinary shared accountability, a rare and unique platform to engage the world’s youth on what matters now, and what will matter the most, tomorrow,” said Catherine Peter, the Africa director of One Young World.

The opportunity to host the summit in Johannesburg would provide the platform to share ideas on the importance of developing young people into future leaders, learning from both developing and developed countries, Kwele said.

On the announcement of the winners, One Young World co-founder David Jones, an advertising guru, said: “We received amazing bids from superb cities and Johannesburg is a true global icon, a city that has shown it can handle world events with style and exuberance.

“We are thrilled that the city will be our host for the One Young World summit 2013.”