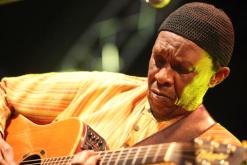 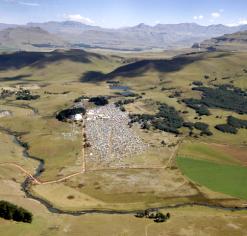 South African music lovers are spoilt for choice when it comes to music festivals, from the internationally acclaimed Oppikoppi, to a family affair like Splashy Fen and the award-winning eco-friendly Rocking the Daisies.

The mix of eclectic music and under-the-stars camping in Woodstock style which is characteristic of all these festivals is proving to be a winner in the country, with attendance numbers growing each year.

Locals and overseas visitors alike turn up in droves to enjoy the vibe.

While some, like the RAMfest, are still in their infancy, Oppikoppi turns 18 this year and Splashy Fen came of age in 2011.

Festival goers delight in much more than the music though, because each event has its own unique character and attractions. These range from the Oppikoppi bushveld to the majestic Drakensberg vistas of Splashy Fen and the unrivalled Cape Town beauty at Rocking the Daisies.

From its small beginnings in 1994 as an Afrikaans music festival, this event has grown into one of South Africa’s most popular and has also caught the attention of the international market.

Voted as the fourth-best music festival held outside the UK by British newspaper the Daily Mirror in 2008, over the years the festival has established itself as a ‘must-do’ event in the eyes of its zealous followers.

Like its name, which is a variant of the Afrikaans “op die koppie”, meaning “on top of the hill”, the Oppikoppi experience is as diverse as its loyal supporters.

Each year offers a different theme such as the 2011 Unknown Brothers, 2010’s Smoor verlief (completely infatuated) and sexy.crooked.teeth of 2009, hinting at the off-the-wall Oppikoppi experiences one can expect.

And expect to hear and to respond to the Opppikoppi festival cry regularly. It is simple yet effective: anyone shouting “oppi” will get a raucous and enthusiastic “koppi” reply from all within earshot.

A firm favourite is the Couch competition which takes place throughout the three days and involves a couch makeover, the more creative the better. Judges select the best couch of the day and give the winners some time on stage with the performing artists.

If you have never been to Oppikoppi, chances are you will be told by most of the regular attendees that “you have not yet lived”. Indeed, for the faithful the festival has become “a near religious experience”, notes the Oppikoppi Facebook page.

This year, Oppikoppi will be even bigger with Hilltop Live organisers planning to expand the festival to accommodate 18 000 people.

Affectionately referred to as “Mordor” because of the dust and thorns attendees have to contend with, in a way these inconveniences have just added to its popularity.

And while most opt for the do-it-yourself experience of putting up their own camp sites, the Kreef Hotel has become an institution in its own right, over the years providing excellent temporary accommodation at Oppikoppi, Splashy Fen, Rocking the Daisies and recently the RAMfest.

An initiative started by Chris Kreef in 2001, the hotel is referred to by its founder as a “zero point five star tent hotel for the cream of the scum”.

At the least, patrons can expect hot showers, security, an excellent buffet breakfast and pristine portable toilets as part of the package.

The Kreef Hotel also offers a “play and stay” option to artists which allows customers to rub shoulders with some of South Africa’s top performers around the fire.

Oppikoppi 18 takes place from 9 to 11 August at its regular venue, Oppikoppi Farm in Northam, Limpopo province.

South Africa’s longest-running music festival is Splashy Fen, established in 1990 by Peter Ferraz and his wife Almary after they attended the Festival of the Flower Children at Woburn Abbey in the UK back in 1967.

Bowled over by this experience, Ferraz dreamed about creating a similar experience here South Africa.

Some time later he bought a farm outside the dairy community of Underberg in the Mzimkulu River Valley in KwaZulu-Natal. Surrounded by the magnificent Drakensberg mountains, Ferraz realised that this was the perfect venue and he and his wife set about making their dream a reality.

He recalls on the website: “We realised immediately that the farm was perfect for a music festival with its natural amphitheatre, great acoustics, breathtaking mountain vistas, winding river and lots of fields for camping. No one could ask for a more ideal setting.”

From its early beginnings as a folksy festival for the family, Splashy Fen has grown into one of South Africa’s premier outdoor festivals. While the organisers promise that the basic recipe has not changed, what has changed is the spectrum of music genres on offer, not just folk and rock, but pop, dance and other contemporary styles to appeal to the broadest possible audience.

The festival is not just about music. Viewed as a total outdoor experience for the family, it offers craft stalls, children’s entertainment and a number of adventure activities including a drive up the Sani Pass, the notoriously difficult road linking between South Africa and Lesotho. Sani Pass is also famous for having the highest pub in Africa at its summit.

This year’s featured act is Zulu guitarist Madala Kunene. No stranger to the Splashy crowd, he’s played 11 festivals so far. Joining him are Van Coke Kartel, Lark, Arno Carstens and Albert Frost, Tidal Waves and a host of other groups and artists.

Splashy Fen takes place from 5 to 9 April in Underberg at the foothills of the Southern Drakensberg in KwaZulu-Natal.

The RAMfest
A rock and alternative music festival which started in the Cape, RAMfest will be taking the vibe to five cities this year.

Cape Town, Durban, Johannesburg, Bloemfontein and Port Elizabeth will host a variety of local groups, while four international acts have been signed up for Cape Town and Johannesburg: AWOLNATION from the US joins Swedish group In Flames, Infected Mushroom from Israel and drum and bass master NETSKY from Belgium.

This is the first time the Swedish metalheads visit South Africa. “Get ready to hear some delicious metal brewed and matured in Sweden,” says vocalist Anders Friden

RAMfest kicks off on 2 March at Hume Park in Port Elizabeth, then moves on to the Mystic Boer on 3 March in Bloemfontein, before heading out to Durban on 9 March.

Following that, Gauteng residents can catch the line-up at Riversands Farm on 10 March and for those in the Western Cape, Ostrich Ranch in Cape Town on 11 March is the place to be.

Festival goers can camp at the venues in Cape Town, Johannesburg and Port Elizabeth.

Rocking the Daisies is a Cape Town music and lifestyle festival which has made a name for itself as one of the greener events on the calendar. In 2011, Rocking the Daisies won a Climate Change Leadership Award for the second year in a row. A first in South Africa, the programme recognises and reward those who voluntarily implement activities to combat climate change.

Besides its recycling efforts during the festival, Rocking the Daisies buys all its electricity from the Darling Wind Farm, South Africa’s very first farm of this nature.

Rocking the Daisies is not just a music event, but offers a diverse line-up from stand-up comedy to gumboot dancing.

Rocking the Daisies is preceded by a curtain raiser, Sowing the Seeds, which took place in February. The main event is set to take place in October 2012.

The annual Earthdance is a little different, and coincides with the international version. This event is aimed at bringing about peace and unity through group consciousness.

Since its inception, Earthdance has been held annually in over 500 locations in 80 countries and is a regular event on the South African calendar.

While some of the Earthdance festivals are more esoteric than others, Earthdance Johannesburg will this year be more commercial in nature, but the essential message of peace and sustainable living remains, the organisers confirm.

“We want to create an event for all people and for all ages with all kinds of music to listen to.”

Earthdance will take place on 22 September at venues still to be confirmed in Cape Town, Johannesburg and Port Elizabeth.

In similar vein, an alternative festival called AfricaBurn, entirely set up and run by volunteers, takes place in the town of Tankwa in the Karoo every year.

The AfricaBurn experience is unique in that it focuses strongly on self-expression, whether in the form of art, music or performance. Expect to be surprised as attendees are encouraged to “go ahead and do it”, with few limitations on creativity other than respecting others and adhering to safety rules.