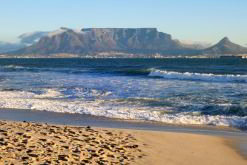 Table Mountain is the only natural landmark
in South Africa that is contending for a
position as one of the New7Wonders
of Nature.
(Image: jacashgone on flickr) 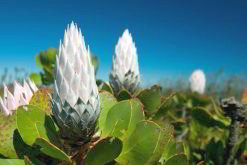 Proteas on the mountain top.
(Image: Clifton Beard on flickr)

There is less than a week left to cast your vote for Table Mountain to be named as one of the New7Wonders of Nature.

Table Mountain is the only natural landmark in South Africa that is contending for a position as one of the New7Wonders of Nature. It can only make it onto the list if it receives enough votes.

The final seven wonders will be announced later this week on Friday, 11 November 2011.

In search of the world’s top nature spots

The New7Wonders of Nature contest was initiated in 2007 to name the world’s top seven natural wonders, and raise awareness of the natural environment, its beauty and diversity.

The campaign is organised by the New7Wonders Foundation in Switzerland, under the leadership of Bernard Weber. The organisation promotes preservation of human-made and natural monuments worldwide.

To qualify for the New7Wonders of Nature competition, candidates had to be defined as natural sites that have neither been created nor significantly altered by humans.

This campaign is the follow-up to the highly successful human-made New Seven Wonders of the World campaign, which attracted 100-million votes from around the world.

One of the biggest drawcards of the official New7Wonders of Nature campaign is that all the winning landmarks are determined entirely by the public by means of a popular vote. The campaign expected to receive more than 1-billion votes.

South Africans, expats living abroad, or anyone who thinks Table Mountain is deserving of the title, should cast their vote.

Ahead of Friday’s big announcement, Weber visited Table Mountain to help South Africa drum up support for its contending landmark.

In his address to the media, he spoke of Table Mountain’s unique design: “You have a natural wonder right in the backyard of a major city. Coupled with the flat top design, Table Mountain, I’m sure you will agree, is the height of design fashion.”

Why you should vote

The awareness and tourism income generated through the New7Wonders campaign offers excellent publicity for the home country of the natural wonder.

Greater awareness of the world’s most beautiful natural sites will also ensure that the natural wonders are better preserved for future generations.

Table Mountain is one of South Africa’s most magnificent natural landmarks, and deserving of a natural wonder title. It is a recognised global icon, visited by millions of people each year.

It is home to a wide variety of plants and animals, some of which survive only in the unique ecosystem which is contained on the mountain.

Table Mountain is a World Heritage site and forms part of the Cape Floristic Region, which is the smallest and richest of the six floral kingdoms on earth.

There are approximately 1 470 species of plants, including over 250 different species of daisies found on the mountain.

If Table Mountain wins a spot in the top seven, there will be many positive economic and employment spinoffs for the Cape Town and South Africa.

According to the City of Cape Town, an accolade of this kind could create up to 11 000 new jobs and an additional R1.4-billion (US$175-million) in annual revenue for South Africa.

At the time of publishing, Table Mountain still hadn’t received enough votes to make it onto the top-10 shortlisted natural landmarks, but with four days left to go, the vote could still swing in the favour of South Africa’s favourite landmark.

According to Vote for Table Mountain, the official campaign backing the beloved landmark’s bid, supporters must be sure to cast their vote in the final leg of the competition, even if they voted in the previous round.

Anyone who has access to a mobile phone or the internet can vote.

There are four ways to vote for Table Mountain:

• Vote on MXit by downloading the application to your mobile phone. Go to ‘Tradepost’ and access ‘MXit Reach’. Click on ‘My Culture’. Add ‘Vote4Table Mountain’ as a contact and then vote as many times as you like.

• Vote by text message as many times as you like by sending the word “TABLE” to 34874. Each message costs R2.

Famous locals get behind Cape Town

Local celebrities, politicians, radio personalities and many committed South Africans have come out in support of Table Mountain.

Even Helen Zille, premier of the Western Cape, has been posting regular tweets on social network Twitter to encourage South Africans to back Table Mountain.

According to news reports, Western Cape Economic Development and Tourism MEC Alan Winde has also committed to paraglide off Signal Hill in a last attempt to encourage people to vote for Table Mountain.

Which landmarks are leading?

However, organisers of the event say that there is still enough time left to see significant changes in voting.

In a statement, Eamonn Fitzgerald, head of communication for New7Wonders, said that in their first campaign for the human-made wonders of the world, many changes took place in the final week and days leading up to end of the competition.

“With millions of votes still set to come in, finalists who are not in today’s top 10 could yet make it into the chosen seven,” Fitzgerald said.

In his message to South Africans, Archbishop Tutu encouraged every person in the country to cast his or her vote and take ownership of Table Mountain.

“It is important that South Africa wins as it’s important for our psyche. And this vote is apolitical – Table Mountain belongs to us all – let’s show we can win. If we win, we will all have a spring in our step,” he said.