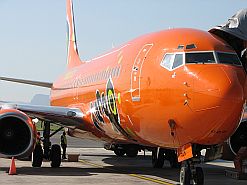 An aircraft in the Mango fleet being
prepared for flight. (Image: Southafrica.to) 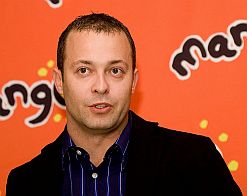 Nico Bezuidenhout, CEO of Mango, says the
core value of their brand is affordability
coupled with high levels of service.
(Image: Flickr.com)

The global Superbrands organisation gave the airline such status in late November 2010 after being recommended by a council of major players from the domestic media and marketing sectors, international media organisations and blue chip companies.

Mango received the experts’ seal of approval and a certificate to prove its new status. The seal can now be used on all official Mango documents and in its advertising campaigns to show customers it has achieved this recognition.

The road to Superbrand status

Mango CEO, Nico Bezuidenhout, said: “The delivery of a brand promise is only as strong as the sum of the collective, and recognition is due to my colleagues who convey the company’s values to thousands of guests daily.”

The rise of the airline to Superbrand status wasn’t a smooth one: during its second year of operation oil prices shot to an all-time high, and in 2009 it felt more than a pinch from the global recession – one of the worst since the 1930s.

“The growth of the Mango brand has been spectacular and for a youthful brand to make an impact on the market is never easy, in particular during a period where negative market influences could have significantly impacted Mango,” said Bezuidenhout.

“The core value of our brand is affordability coupled with high levels of service – it is a universal message that we aspire to deliver daily,” he added.

Mango has also embraced social media networks to interact with its customers and deal with feedback and complaints.

Bezuidenhout said: “Mango has a strong social media presence, including Facebook, a blog and a Twitter feed where travellers are able to directly engage with the brand.”

In its short lifespan, the airline has received four Prism awards for its communication strategy; a Budgie award for its marketing campaign; the title of Best African Low-cost Airline at the World Travel Awards in 2007; and four Acsa Feather awards.

The airline was twice named the “coolest” low-cost airline in the Sunday Times Generation Next Awards in 2009 and 2010. It was also the top low-cost consumer airline brand in the Sunday Times Top Brands Awards for 2010 and received the nod for best publication for its in-flight magazine, Mango Juice in 2009 at the SA Publication Forum Awards.

The Superbrands organisation has operations in 80 countries throughout the world. It aims to recognise brands that stand out in their respective markets by awarding them Superbrand status – this strengthens a brand’s position, adds a sense of prestige and sets it apart from the competition.

Mango was launched on 30 October 2006 and its first flight was on 15 November of the same year. Its key goal is to offer sustainably affordable air travel that is accessible to all South Africans.

The airline was the first to introduce payment through retail store cards. It accepts all Edcon brands, which include Edgars, Jet, Prato and CNA cards. It was also the first to trade through retail in 2007, enabling customers to buy tickets from Checkers, Shoprite and Checkers Hyper Money Market Counters.

Mango is the only low-cost carrier that offers an in-flight entertainment system, Mango TV, which is complemented by Mango Juice magazine. Its car rental partner is Tempest Car Hire and Southern Sun is its hospitality partner.

Mango has a strong social conscience and ploughs a portion of its proceeds back into community development. In partnership with Tempest Car Hire, it has boosted grassroots football by sponsoring the development of the sport in 52 schools and has hosted three regional tournaments.

It also takes underprivileged children on educational outings and plants trees to offset its carbon emissions.