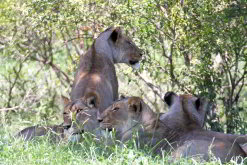 Lions disappeared from the Karoo in
the 19th century, but have now returned,
thanks to a Sanparks project that aims to
re-establish the predator-prey balance.
(Image: Luke Harwood)

Earlier in November 2010 a pride of eight lions was released into the Karoo National Park, marking the return of the free-ranging big cats to the area after an absence of 170 years.

The four adults – two males and two females – and four cubs gained their freedom after a two-month stay in an enclosure in the park, where they adapted to their new environment.

The 90 000ha Karoo National Park is managed by South African National Parks (Sanparks), the national parks authority. Sanparks introduced lions back into the park with the aim of re-establishing the large predator-based ecosystem that once existed.

The lions will also boost tourism to the area and are expected to add some excitement to the usual atmosphere of tranquillity.

According to Sanparks’ regional GM Lucius Moolman, the lions, as well as other activities such as 4×4 trails, will tempt visitors to extend their stay in the Karoo National Park from the usual one-night stopover to a two- or three-night holiday.

Sanparks reports that lions were once widespread in the area, and that the last of the magnificent beasts was shot and killed at the nearby small town of Leeu-Gamka in 1842.

Sanparks also suggests that the number of farm and river names based on the word “lion” is further evidence that the cats once roamed free across the land.

The names of the area’s two main rivers, the Leeu and Gamka, are derived from the Afrikaans and ǀXam words respectively for lion. ǀXam is an extinct Khoisan language, also used for the South African national motto ǃke e: ǀxarra ǁke (diverse people unite).

The new Karoo lions come from the Addo Elephant National Park in the Eastern Cape, where the predators were successfully introduced in 2003. Those animals, in turn, were taken from Kgalagadi Transfrontier Park stock and were selected for the Karoo because of their genetic similarity to the Cape lions of old, and because they are free of disease.

Visitors need not fear for their safety – low-level electric fences now surround the rest camp, its reception area, swimming pool and camp site, and the popular fossil trail. A lion-proof fence has been installed around the entire perimeter of the park to prevent the predators from wandering into neighbouring farms.

Tracking collars around the animals’ necks will allow Sanparks to monitor their movements closely and observe their choice of habitat and prey.

The Karoo National Park is located in the Great Karoo, the vast arid region of South Africa that extends over an area of 400 000 square kilometres in the interior of the country. The Karoo proper, South Africa’s largest ecosystem, is sub-divided into the Little Karoo in the south and the Great Karoo in the north, which was at one time in the distant past covered by a glacier.

The San Bushmen wandered the great plains for hundreds of years, along with herds of antelope, zebra and other large mammals, and it wasn’t until the beginning of the 19th century that Europeans ventured into the interior. Once the Westerners had taken over, sheep and cattle eventually replaced the wild animals, which led to a drastic depletion of grass cover.

The Karoo was also the setting for violent clashes between the forces of the English and the Afrikaners during the second Anglo-Boer War of 1899 – 1902. Remnants of the conflict are still visible, mainly in the form of blockhouses scattered throughout the region.

Today sheep farming is still the region’s primary economic driver, but tourism is on the rise.

Proclaimed in 1979, the Karoo National Park is situated on the N1 route between Cape Town and the interior, near the town of Beaufort West. Visitors travel to see not only the park’s spectacular scenery, but also the variety of creatures which have adapted to the harsh environment.

Many of the animals found here today, such as the vulnerable Cape mountain zebra and the critically endangered black rhino, are those which were once driven out by farmers and have made their way back to their original habitats.

The park boasts a diverse range of birdlife, such as the booted and black eagles, rock kestrel, and Namaqua sandgrouse. It’s also home to a rich variety of reptiles, including tortoises, chameleons, geckos, skinks, snakes and one species of monitor lizard.

The Karoo lions will not go hungry, with some 1 500 gemsbok, 1 400 red hartebeest, 400 eland, 700 kudu and 600 ostrich resident in the park. Sanparks estimates that the park will currently be able to sustain up to 20 lions.

Since 1987 the Karoo National Park has been the scene of the Quagga selective breeding project, which attempts to bring back the extinct quagga, a sub-species of the plains zebra, by selective breeding with plains zebra stock. Quaggas – unusual brownish, partly striped zebras – were wiped out by hunters during the 19th century, and the last mare died in 1883 at the Amsterdam Zoo.