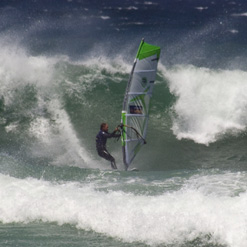 There are some good spots in Cape Town
for beginner windsurfers. This is not one
of them. Bart de Zwart tests some high-
wind equipment near Cape Point. 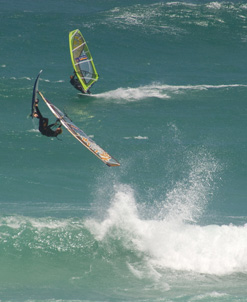 Big waves give the opportunity to get
some speed up coming in to the beach –
and to get airborne going back out.
(Images: Jennifer Stern)

When the wind is howling in Cape Town, most people batten down the hatches. But Stefan Gölnitz, Bart de Zwart, Gunther Baade, Jonas Holzhausen, Manuel Vogel and Frank Lewisch are not like most people. These guys come to the Cape because of the wind, not in spite of it.

So the attendant at the gate of the Cape Point section of the Table Mountain National Park had to shake herself out of her inaction-induced reverie to sell them tickets. Not many people were braving the Cape of Storms with a howling southeaster blowing.

But it was the perfect opportunity to test some wave-jumping boards and heavy weather sails, so the test team set off to play in the wind and waves.

Gölnitz is a journalist for a Surf Magazin, the biggest windsurfing magazine in Germany and – strange as it seems – the best-selling windsurfing magazine in the world.  Germany has well over 100 000 active windsurfers, which makes it probably the biggest windsurfing market in the world. This is partly because the newer craze of kite surfing, which has seduced so many windsurfers away, has not really caught on in Germany to the same extent it has in, say, South Africa.

After a short session near the Cape of Good Hope, they moved off to Witsand – a popular spot for experienced boardsailors.  And they went wild. There were a couple of intrepid kite surfers there when they arrived, but they were just getting out the water as the wind was picking up.

Gölnitz has a pretty cool job. He has to do some nice travel articles, and he gets to play on the water more than most people who have regular jobs.

But probably his favourite assignment is his six-week sojourn in Langebaan, where he and his colleagues test the latest, newest and hottest windsurfing equipment. They test light weather equipment in Italy, but they have to leave Europe to get really consistent high winds and big seas, so they come to Langebaan.

This is the 12th consecutive year the Surf Magazin test team have used Langebaan as a location, and it has become an automatic choice.

“In fact,” Gölnitz says, “if the water was warm, this would be maybe the best windsurfing destination in the world.”

Langebaan, he says is the perfect base. The lagoon is calm and protected so they can test relatively light weather gear when the wind is not too strong. When it picks up – as it usually does in the afternoon – they can test racing gear, getting up to tear-blurring speeds across the turquoise lagoon.

“And,” he adds, “Swartriet is a short drive away when we want to do wave jumping.

“And Cape Town is close by, so we can go to Big Bay to surf or to Cape Point and Witsand. There are so many good sites in just an hour’s drive.”

Gölnitz says it’s not only the quality of the wind and sea conditions – fabulous as they are. It’s also the general vibe of Cape Town.

“We’ve done the tests in Egypt and the Caribbean before,” he says. ‘But it’s boring. There’s nothing to do when you’re not sailing. In Cape Town, if the weather is bad, we can go to a movie or to the Waterfront. Or even play golf.”

A bit of translation may be needed here. Bad weather for Gölnitz means no wind, regardless of how sunny and warm it may be.

They are based for the whole six weeks at the Cape Sports Centre. It’s conveniently right on the beach and it has the facilities to effect repairs if necessary. And it’s the centre of action for windsurfers, kite surfers, paddlers and cyclists with all manner of active happenings going on all the time, so it’s a vibe they can relate to.

They need to test an enormous amount of equipment so it’s fortunate for them they have a sponsorship with a German airline, otherwise the cost of flying about 600kg of gear from Europe to the tip of Africa and back again would be prohibitive.  And that’s not even the half of it. The rest is brought over by the manufacturers themselves.

The first week of their stay is a real who’s who of international windsurfing. The top equipment manufacturers in the world fly in to Cape Town with a selection of gear they’d like tested, and then they spend a few days in Langebaan networking, pushing their products and – of course – sailing.

After that first week, the team gets down to the serious work of testing the gear. It sounds like a cushy job but it really is hard work.

The other five members of the team are not journalists, but are mostly semi-professional or professional windsurfers – either teaching windsurfing or running shops. It’s mid-winter in Germany when any sensible person would be sitting in front of a log fire with a mug of glühwein, or – at most – skiing, so business is slow for the water sports industry.

While their skill is an essential ingredient in their being part of the team, size also does count. The team consists of three pairs of sailors of similar weights – two light, two medium and two heavy.

And they don’t just go out there and have fun. They will perform specific tasks with a range of different boards and sails, and they take copious notes. Then they spend hours in the evening comparing their opinions, and recording their scores.

The result is the most authoritative review of windsurfing equipment in the world. Keen boardsailors from other countries have started to learn German just so they can read it.

While it’s not a holiday, and they are here to work, six weeks is a long time so many of the team are joined by friends and family for a week or two, and they certainly enjoy spending time in Cape Town.  They’ve got another couple of weeks, and then it’s back to a European winter – but that’s not too terrible a fate. There’s skiing and glühwein, and Christmas with real trees and homemade stollen.