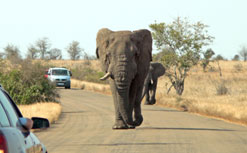 Animals have right of way on the roads of
the Kruger Park. (Image: Mary Alexander,
MediaClubSouthAfrica.com. For more
photos, visit the image library.) 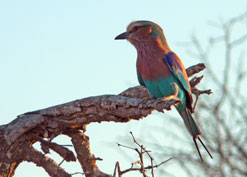 A lilac-breasted roller in the Kruger Park.
The Kruger is known for its spectacular
birding as well as game viewing.
(Image: Mary Alexander,
MediaClubSouthAfrica.com. For more
photos, visit the image library.)

The flagship of the South African National Parks organisation celebrated 110 years of conservation over three weeks in June 2008. The world-renowned Kruger National Park, established in 1898, is the largest game reserve in South Africa and is now a part of the 35 000km² Great Limpopo Transfrontier Park, a peace park with no internal borders that joins the Kruger to Zimbabwe’s Gonarezhou National Park and the Limpopo National Park in Mozambique.

The three-week-long celebration period, held in various places throughout the region, was planned to give as many people as possible the chance to join in the festivities.

At the final ceremony in Skukuza, the Kruger’s main rest camp and administrative headquarters, Environmental Affairs and Tourism Minister Marthinus van Schalkwyk and other dignitaries paid tribute to the park and to the people who have helped make it one of the country’s most valuable tourism assets as well as a respected contributor to conservation efforts over the years.

“There is no doubt in my mind that the park holds a special place in everyone’s hearts,” said Van Schalkwyk, “and over the last 110 years it has become an icon for the country on many levels, including conservation, tourism and national pride”.

The minister added that the park received over 1.3-million visitors during the last financial year. In 2003 the number of tourists to the park exceeded a million for the first time, a feat that has been achieved every year since then.

Tackling the issue of global warming and how it affects the park, Van Schalkwyk explained that plans are in place to “assess how the planning, management and expansion of our national parks can build resilience to climate change. Increasingly, we are integrating a greater variety of habitats and altitudes that reduce the risks to endemic species into our protected areas design.”

Other items at the Skukuza event included a drill demonstration by the Kruger Park ranger corps, performances by dancers of various cultures from around the park, a performance of the special Kruger Park song by the park’s own choir and the cutting of the birthday cake.

The Kruger Park song, titled “Great Wilderness Great”, was commissioned especially for the event and was composed by songwriter Shalati Joseph Khosa of Ba-Phalaborwa. “The Kruger Park is a huge inspiration to me and I feel that it is one of our nation’s most valuable heritage assets, so it was a natural step for me to write this song,” said Khosa.

During the course of the celebrations the South African Mint introduced the 2008 gold Krugerrand. The Krugerrand is a 22-carat gold coin weighing one troy ounce, with smaller denominations also available. The first coin was struck at the Mint in 1967.

The 2008 coin was manufactured with an antique hand-press, used by former South African president Paul Kruger’s government-in-exile to create money during its hostilities with the British forces around the time of the South African War (1899 – 1902). The current edition features a “110 Years KNP” logo, and 110 of these coins have been allocated to Kruger Park visitors, who will obtain them on a first-come-first-serve basis by filling out an order form available at all entrance gates.

As big as a country

Covering almost 19 000km², the Kruger National Park is comparable in size to the whole of Wales or Israel. It came into being in 1898 but was then known as the Sabie Game Reserve. Development came a standstill during the South African War, but afterwards the victorious British took up the reins again, tasking Major James Stevenson-Hamilton in 1902 with the responsibility of looking after the area.

Stevenson-Hamilton, the first warden of the park, retired in 1946 after holding the post for 44 years. He is commemorated in the name of the park’s main rest camp Skukuza, which is a Xitsonga word meaning “he who sweeps clean” and refers to his tireless efforts to control poaching.

The warden worked hard to gain official status for the park and in 1926 his efforts were rewarded when the government passed the National Parks Act and proclaimed the Kruger National Park, naming it after the president at the time, Paul Kruger.

Stevenson-Hamilton was joined in 1902 by new assistant warden Harry Wolhuter, who famously survived an attack from two lions in 1904, armed with nothing more than a pocketknife. He killed the first lion with the weapon and his dog kept the second lion at bay until help arrived. The knife and the lion skin can be seen in the Stevenson-Hamilton Memorial Museum at Skukuza.

As well as now forming part of the Great Limpopo Transfrontier Park, the Kruger is also part of the Kruger to Canyons biosphere, an area designated as such by the United Nations Education and Scientific Organisation under its Man and Biosphere programme. Biosphere reserves are recognised internationally as important areas for conserving biological diversity and developing the necessary scientific and technical knowledge, as well as human values, for successful conservation efforts.

The Kruger to Canyons biosphere, encompassing a remarkable 55% of South Africa’s total terrestrial biodiversity, is located in eastern South Africa and bridges the Limpopo and Mpumalanga provinces. It contains a diversity of landscapes, ranging in altitude from more than 2km above sea level along the Drakensberg escarpment to 300m above sea level nearer the coast.

The reserve is home to more than 1.5-million people, and in addition to accommodating a variety of animals including rare antelope such as Tsessebe, Sable and Roan, it is one of the few remaining viable habitats for the African wild dog, the continent’s most endangered predator.

The Big Five and Little Five

The park is divided into six ecosystems: baobab sandveld, mopane scrub, lebombo knobthorn-marula bushveld, mixed acacia thicket, combretum-silver clusterleaf woodland on granite and riverine forest. Altogether it has 1 982 species of plants, some of which are the baobab, kiaat tree, fever tree, knobthorn, marula and mopane trees.

The Kruger Park offers accommodation to suit the needs and preferences of just about anyone, ranging from five-star luxury to self-catering bungalows, tented camps, and caravans.