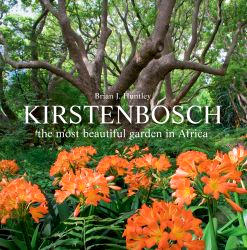 A display of the Clivia miniatra cultivar ‘Kirstenbosch Splendour’, bred by the garden’s bulb expert Graham Duncan grows in the planted avenue of camphor trees on the Kirstenbosch premises. This image was selected as the cover photograph for the garden’s centenary publication, written by South African ecologist Professor Brian Huntley. 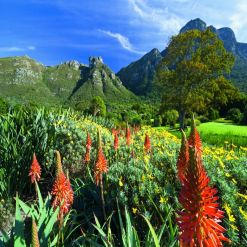 Kirstenbosch has become an international showcase of South Africa’s natural beauty, and a leader in botanical and zoological science, research and conservation.
(Images: Adam Harrower) 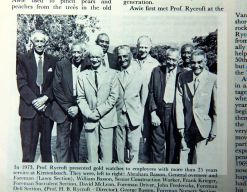 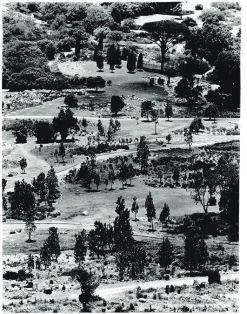 A photograph from the 1920s shows the slopes on which the protea and erica sections were developed in the 1960s.
(Images: Sanbi)

In 2013 the world-famous Kirstenbosch Botanical Gardens in Cape Town celebrates its 100th anniversary. A beautiful coffee table book, written by acclaimed South African ecologist Professor Brian Huntley, has been published in honour of the garden’s centenary.

Kirstenbosch: the most beautiful garden in Africa, tells the story of the garden’s establishment, its setbacks, triumphs and the remarkable people who helped to make it what it is today – an internationally renowned botanical, science and conservation facility.

Through vivid photographs, art work, valuable archive material and the author’s detailed, yet accessible writing style, Huntley tells the tale of a garden that has captured the hearts of many people for centuries.

The book is the first comprehensive account of the history and progress of the botanical facility since Compton’s 1965 publication, Kirstenbosch, Garden for a Nation, which went out of print many decades ago.

Compton’s history only covers developments at the botanical garden until around 1963, and subsequent publications lack coverage of the important developments of the past two decades.

Huntley says the approaching centenary inspired him to write an updated account of the Kirstenbosch story.

“When I retired I wanted to write something that brings the history of the garden into popular media and I wanted it to be technically accurate and visually attractive,” he says.

And the book achieves both objectives.

A combination of beauty and science

In the book Huntley tells how Kirstenbosch grew to become an international showcase of South Africa’s natural beauty, and a leader in botanical and zoological science, research and conservation.

Huntley believes this makes it one of the best gardens in the world.

“What distinguishes a proper botanical garden of global standing is a combination of flora, landscaping and strong science and education programmes,” he says.

A fascinating story, told by an expert

Huntley is an internationally respected conservationist with over 45 years of field research and management experience in many African ecosystems.

Since his retirement from the South African National Biodiversity Institute (Sanbi), he’s been working as a consultant to several UN agencies on conservation projects.

What sets the book apart is Huntley’s personal love for the gardens. He has a long-standing relationship with Kirstenbosch spanning over 50 years. During this time he lived on the premises for 19 years, which afforded him the privilege of daily walks in the garden and the opportunity to get to know it better than just about anyone else.

“Over the years, I got a good sense for the seasons in the garden,” he says.

He also dedicates numerous pages to the garden’s conservation and education initiatives, and its links with the community.

Ensuring that the garden can be enjoyed by people from all walks of life, and not only tourists visiting Cape Town, is a strong priority for staff at Kirstenbosch.

Even with so much knowledge about the gardens, Huntley says writing the book was no small feat.

“A significant amount of research went into it,” he says. “I had to trawl through databases, archived photos, reports and information going back a century or two.”

He also included oral history accounts provided by people who have worked at Kirstenbosch for many years.

“I’ve picked up many anecdotes and accounts as time went by,” he says.

Huntley’s informal tone ensures that the book doesn’t read like a science journal or a history textbook, but more like a conversation about Africa’s most beautiful garden.

While looking through archive photographs, Huntley came across a few surprising facts about Kirstenbosch.

“What surprised me is that in the early days of the garden, the first 10 to 30 years of its existence, it was very shabby and makeshift,” he says.

Kirstenbosch wasn’t as sophisticated and pristine as it is today, yet it was very well supported.

“Supporters in those days were of the highest standing in government, business and society. They were all very passionate about it and believed in the importance of the garden,” he explains.

“What people don’t know is that the gardens came from very humble origins.”

An extensive range of new and ongoing research takes place at Kirstenbosch. This includes studies at global scale on topics such as climate change modelling and at continental level in specialised fields such as plant taxonomy.

A molecular laboratory, established in 2000 at the Kirstenbosch Research Centre, has made it possible to pioneer research on the evolution of proteas, other fynbos plants and animal groups with special importance in South Africa, in particular reptiles and frogs.

“Our national obsession with the big, hairy mammals means we have tended to overlook our lizard fauna,” Huntley says in the book.

The Protea Atlas Project, which has been ongoing at Kirstenbosch since 1990, has led to the compilation of probably the biggest, most accurate, geo-referenced database of information on the distribution and abundance of any family of plants, anywhere.

This unique database, put together by a small in-house team and hundreds of volunteer field workers under the leadership of scientific officer Tony Rebelo, provides researchers with information to test responses of species to changes in environmental factors.

Kirstenbosch in years to come

Going forward, Huntley believes one of the most important challenges for Kirstenbosch is to maintain the highest standards of professionalism in horticulture, visitor amenities and research.

“It must retain its position as a leader in this field,” he says. “It must also remain a centre of innovation.”

And is there any part of Kirstenbosch that Huntley thinks of as his favourite little nook? He can’t single out any.

“There are too many good places,” he says. “If you wander around the garden, around every corner you will find something nice.”