An outside view of the majestic
One&Only Cape Town hotel overlooking
the V&A waterfront.

A luxury suite with a classical yet modern,
contemporary feel. 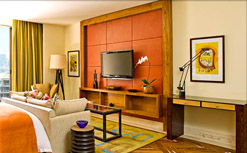 Each room at the hotel boasts a colourful
ensemble of interesting décor.

The giant sized pool can accommodate the
needs of both social and avid swimmers.
(Images: One&Only Resorts)

The hotel, the One&Only Cape Town at the V&A Waterfront, which cost about R1-billion (US$100-million) to build, will be officially opened at a glittering affair with about 400 hand-picked guests and celebrities in attendance.

The hotel chain prides itself on offering pure opulence to guests, all of which naturally come at a price.

For the grand opening of the One&Only Cape Town, Kerzner has left nothing to chance.

Hotel staff uniforms have been designed by top South African fashion designer Jenni Button and are made of pure silk, to ensure that the standard of the hotel is maintained on all levels.

A little piece of heaven

The hotel, designed by distinguished architectural firm, Dennis Fabian & Berman and Ruben Reddy, is a seven-storey construction of luxury.

It will offer an exclusive wine selection that promises to satisfy even the most discerning wine lovers. The 6 000-bottle wine cellar is affectionately called The Wine Loft and boasts glass walls and designer trimmings.

For avid swimmers, the hotel has a 350m² infinity-edge swimming pool.

Other features include luxury suites – some of which have their own en-suite spa treatment rooms.

All of the suites overlook either the V&A Waterfront marina or panoramic views across to Table Mountain, and are said to be generous in size – ranging from 63m² for a basic suite to 383m² for the presidential suite.

Kerzner travelled to South Africa last week to supervise the finishing touches to his hotel, which is expected to attract a flurry of the rich and famous.

A night to remember

In traditional Kerzner-style, the opening ceremony for the One&Only Cape Town will be graced by some of the world’s most famous celebrities and influential business moguls.

The star-studded event will be Kerzner’s first in 17 years in South Africa after he opened his grand R300-million ($30-million) Palace of the Lost City – an add on to the Sun City casino and resort in 1992.

Speaking to journalists on his arrival, the tycoon said he was not all nervous about opening night, “There’s no pressure. Sure, this is by far one of the biggest events I’ve done in South Africa, but it doesn’t help to get nervous.”

The guest list for the event, described as a cocktail party, will include US actors Sharon Stone and Robert De Niro. UK-based actress Thandie Newton and supermodel Naomi Campbell will also be in attendance.

Each guest will be provided with a personal butler who will be at their back and call.

This event will also be a much smaller one than the November 2008 extravaganza at the opening of Kerzner’s Atlantis hotel in Dubai.

The one night celebration, co-ordinated by party planner to the stars Colin Cowie, will be a “relatively low-key” event.

Guests at this year’s party will be treated to a feast created by 79 local and international chefs, who will be creating the scrumptious dishes from the hotel’s modern-state-of the-art kitchen.

A passion for the hotel industry

Sol Kerzner’s rise to the top of the hotel industry was not just one of luck, but of calculated risk and right timing.

Often described as the “Sun King” or the Donald Trump of South Africa, Kerzner is secretive about how much his worth, and at one stage even claimed that he didn’t know the grand total of his fortune.

Kerzner was born in Johannesburg on August 23 1935, the youngest and only son of four children to Russian parents who had immigrated to South Africa six years earlier.

Although he grew up poor in the downtown suburb of Doornfontein in Johannesburg, Kerzner had a happy childhood, and love for classical music.

After he graduated as a chartered accountant from the University of Witwatersrand, Kerzner quickly rose up the ranks of one of the largest accounting firms in Durban, and at the age of 26, he became partner.

But his spirit was elsewhere. He found number crunching boring and it was then that he decided to turn his attention to the hotel trade.

He leased a hotel, which he managed at night and on weekends, while still continuing with his day-job. His hard work paid off when it became a flourishing establishment.

In 1963, with borrowed venture capital and no previous track record in the industry, he set out to build South Africa’s first five-star hotel, despite never having seen one or ever having travelled out of the country.

Speaking of those trying times Kerzner says he remembers what it feels like to convince people to have confidence in him, “I had no capital of my own, no track record and many people were sceptical about what I was doing. I remember sitting around the reception rooms of finance houses, trying to convince them what I wanted to do was financially viable.”

After a fact-finding mission in America, he started building the Beverly Hills Hotel.

The hotel was a runaway success and he went on to build the 450-room Elangeni Hotel on Durban’s southern beachfront.

His newfound success prompted him in 1969, to establish the Southern Sun hotel chain in partnership with South African Breweries.

In 1979, he built Sun City in the North-West province, after striking what has been described as an allegedly controversial deal with Bophuthatswana homeland leader, Lucas Mangope, for exclusive gambling rights.

After his success on home soil, Kerzner ventured overseas where he has built his One&Only hotel resorts in several countries including Mexico, The Bahamas, Mauritius, Maldives and Dubai.

Speaking to UK newspaper, The Telegraph, Kerzner said he really loves his work, “I have always said that the thing that drives me is not the money – although there are obviously advantages to living like this – but it’s the excitement of the business, the thrill of creating.”

And a rich lifestyle he does have.

His properties include a private estate in Hout Bay, a R10.5-million ($1.5-million) four-bedroom penthouse he bought for his daughter, Beverly, in New York, a portfolio of residences in London’s posh Chelsea suburb and a villa set on 2.8ha of Mediterranean cliff side in Monaco, as well as a home in the south of France.