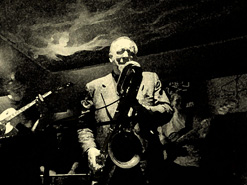 Dinner has been polished off, bottles of wine flattened, and although tomorrow is Friday and still a work day, the weekend beckons not far behind. In other words, a 30-plus Joburger who hasn’t gone out partying in months feels a bit like dancing Thursday night away.

For the past several years, the place to show off that fancy footwork to Johannesburg’s mature crowd has been Katzy’s, a smoky and crowded bar with a live band for those who still pine for the glory days of seventies, eighties and nineties pop.

The bar is located at the Firs shopping mall in Rosebank, a short walk from the Park Hyatt Hotel. It is across the hall from the famous Grill House of Rosebank. In fact, the bar is named for owner Joel Katz, who also co-owns the Grill House.

“It’s like the song from Cheers,” Katzy said. “It’s a place where everybody knows your name.”

The same songs are repeated every week at Katzy’s, but the patrons don’t seem to mind: lots of Lionel Ritchie, Motown, Bob Marley, and Lou Rawls.

“Romeo and Juliet,” croons the singer, “Samson and Delilah!” the crowd hollers back.

One wag describes the crowd of professionals who gather at Katzy’s as those “whose sell-by date is fast approaching”. Maybe that explains the intensity with which the dancers crowd the tiny dance floor, boogying hard even as waiters laden with Amstel lager and buffalo wings jostle past, odorous cigar smoke hangs in the air and the girl with the glittery faux crown screams it’s her birthday.

Most of the patrons turn up at Katzy’s every few weeks. Others show up at the bar faithfully every week. One group of regulars take dancing lessons at the nearby Dance Junxion and then head to Katzy’s to practise their moves. They usually stake their place near the entrance. The waiters know their routines and appear with an ice bucket filled with Heinekens.

Another regular group is the crew from Lufthansa who stay at the nearby Park Hyatt Hotel. The faces change, but a half a dozen or so Lufthansa crew is always on hand. You are also bound to bump into company CEOs and newspaper executives from the nearby Avusa building, owners of the Sunday Times and what feels like half of South Africa’s media.

For the past few months, the area around Katzy’s has been under major construction. Owner Investec Property is spending R500-million (US$61-million) to refurbish the entire mall as part the City of Johannesburg’s effort to turn the Rosebank area into a transportation node. The regulars at Katzy’s are so devoted they would not stop coming even as construction for the Gautrain rapid rail project ripped the place apart. Week after week, the entrance to the venue would be diverted by new labyrinth of pathways that ended up at the bar.

But that ended in late March as the final bit of construction was began and Katzy’s was shut down. For the next few weeks, Katzy’s regulars were rudderless, not knowing what to do with themselves on Thursday nights.

But the drought ends on 10 June as the brand new and expanded Katzy’s opens its doors in what its owner hopes will be a continuation of one of Joburg’s most beloved watering holes.

Regular patrons will be surprised by the new Katzy’s. First, it has been physically moved from across the hall from the Grill House to adjacent to it. The new space starts with a long L-shaped corridor with its brick wall decorated by large framed paintings of jazz-era icons. Inside, the main area is divided in three distinct sections each furnished with overstuffed leather couches and small stools. A U-shaped bar is in the back, and large French windows lead to a large patio filled with tables, chairs and large umbrellas.

The centrepiece of the venue is a small stage for live performances. The new Katzy’s can accommodate up to three times the number of people of the old venue.

“This is a purpose-built space for live performance,” said Saul Katz as he took a visitor around the new space. “Rosebank is booming. The Gautrain is coming. A big office building and new hotel are going up, and three new restaurants are opening nearby. And I’m just mentioning a few of the projects planned around here.”

Katz plans to feature a live band every day except Sunday, when the venue will be closed.

“Katzy’s came into existence by accident,” Katz said. “We wanted more space for tables for the Grill House and we wanted to take out the bar stools across the hall … almost like a waiting area. But it grew and grew, and now has its own identity.”

That identity will include a full food menu and a separate staff.

Before the official opening on 10 June, Katzy’s quietly opened its doors on Tuesday 2 June with a performance by the band Atmosferic jazz quartet led by Wendy Twyford.

As the band sped through The Girl from Ipanema, the bossa nova song from the 1960s, and Twyford, dressed in a slinky black cocktail gown, wowed the crowd, one of Katzy’s regulars was mesmerised.