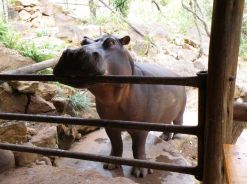 The 10-year-old Jessica, who has
developed a strong bond with her
foster family, is helping to further
research into her species.
(Image: Jessica’s Place)

She appeared on the Oprah Winfrey show in 2010, and is an icon in Japan and Korea. Starring in over 70 documentaries and television shows, she has her own website and Facebook page, and thousands of adoring fans worldwide.

One could be forgiven for mistaking her for a Hollywood starlet, but this young girl from Hoedspruit in Limpopo province, South Africa, is a hippopotamus named Jessica who is highlighting the need for conservation of her kind.

Jessica was a star at the tender age of two, when she appeared in her first film, the locally produced big screen hit Mr Bones. Since then, the 10-year-old has delighted and educated television audiences of the National Geographic and Animal Planet channels, and has featured in various television programmes both locally and internationally.

Jessica’s world renown, and her status as an international star, is fostering a new awareness of her species, and conservation as a whole.

The hippopotamus (Hippopotamus amphibious) is classified as vulnerable on the Red List of the International Union for Conservation of Nature. After the elephant, the hippo is the largest living mammal on land. The name is derived from the ancient Greek, meaning “river horse”.

Hippos are amphibious creatures, graceful in water and deceptively quick on land, able to reach speeds of 60 kph. Once prolific from the Nile delta to the Cape, they are now mostly confined to protected areas.

In contrast to other large land mammals, very little is known about these hefty animals, as they can be aggressive and are notoriously difficult to study.

This is where Jessica is making a difference.

Most biologists are keen to take blood samples of the animals they study. Large animals must be tranquillised first, but this is not easy in the case of hippos. The creatures forage on land in the night, which makes it hard to track and dart them. During the day they wallow in their favourite waterhole or mud pool, and here they can’t be darted or they would drown.

Although hippos are killed for meat, and to a lesser extent out of fear, a lack of knowledge of the species remains the biggest challenge to their conservation.

If the extinction of the hippo is to be prevented, certain steps must be taken. This would include protecting their natural environment, counteracting poaching and gathering and sharing more accurate information.

Although she can hardly be called typical of the species in terms of her upbringing, Jessica has been monitored over the years to get a better understanding of hippo behavioural and growth patterns. This information is then passed on to scientists and wildlife programmes.

One important discovery, in which Jessica played a role, revealed that hippos communicate with each other under water in a similar manner to that of dolphins and whales.

When analysed, her DNA pointed to the fact that the hippo’s closest living relatives are whales and dolphins. Jessica’s DNA is also being used in further tests to unlock the secrets of her species.

With visitors streaming to her Hoedspruit home, owned by her foster parents Tonie and Shirley Joubert, and a growing worldwide fan base, Jessica plays an important role in bringing attention to hippos and their plight throughout Africa.

The attention and interest generated around her facilitates the valuable spread of positive information through wildlife portals, as well as blogs and various social media sites. This awareness will soon be taken a step further, as a partnership with local wildlife film specialists Africam will see the installation of streaming video cameras on the farm.

Looking to the future, the Jouberts are hoping that, with Jessica now at a suitable weight and in the puberty stage, a pod of little Jessicas is a promising prospect. This will open new doors of discovery and research into how hippos nurse and raise their young.

In early 2000 the province of Limpopo was one of the regions devastated by a five-week spell of heavy rain. People in neighbouring Mozambique, Zimbabwe, Botswana and Swaziland were also severely affected.

The unrelenting rain caused the mighty Limpopo River to rise to its highest levels in 15 years, and eventually burst its banks in places.

Washed away by the flood only hours after birth, a traumatised Jessica was found by retired game ranger Tonie Joubert on his farm near the Kruger National Park.

He took her home and nursed her back to health, and she soon became one of the family. Jessica’s bond with the farm dogs is particularly strong.

Over the years as a game ranger, Joubert has cared for many orphaned animals. He has raised lions, leopards, elephants, buffalo and many antelope species and returned them all to the wild, but said he has never come across an animal quite as unique as this young hippo.

“She is gentle and genuinely kind,” said Joubert, “and has never shown any signs of aggression.”

Jessica has never been fenced in or kept in a pen, and is free to roam the land and rivers in the area, grazing serenely with neighbouring wild hippos. Grass makes up the bulk of her diet, although it is supplemented with sweetcorn, beetroot and her favourite treat, sweet potatoes.

She also drinks up to 40 litres of sweetened rooibos (red bush) tea a day.

Visitors to the farm first watch a video of Jessica’s story and can then spend time interacting with her. They are allowed to feed her and spoil her with rooibos tea.

The farm is open seven days a week for day visitors and for those wanting to spend a bit longer in the bush, a handful of self catering units offer cozy accommodation.

More information can be obtained from Jessica’s official website, which also has an online store where various items are available.

Not only has Jessica’s fame helped her species, but indirectly she also adds value to her community. According to Joubert, Jessica indirectly contributes up to R2-million (US$296 000) a year to the local economy.