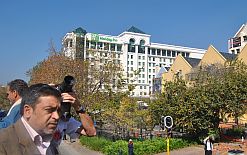 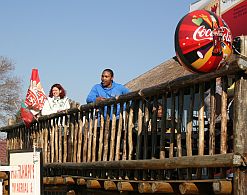 Sakhumzi, a restaurant in Soweto, is
a favourite tourist destination.
(Images: Bongani Nkosi)

Almost 90% of visitors who came to South Africa during the 2010 Fifa World Cup found locals to be very friendly and hospitable, according to a recent survey which highlighted the economic potential of the local tourism industry.

The survey was run by the Democratic Alliance (DA), the official opposition party to the ruling African National Congress.

The results, released on 19 September, showed that 89% of tourists found South Africans to be “extremely welcoming”.

The 98 face-to-face interviews, conducted by the party during the month-long football spectacle, took place in and around host stadiums and near shuttle services. The survey covered the Western Cape, Eastern Cape, KwaZulu-Natal, Gauteng, Free State and Mpumalanga provinces.

According to the results, not one of the interviewees found South Africans to be unfriendly, and only 11% found locals to be “friendly”, as opposed to “very friendly”.

This research indicates that the impressions of the estimated 383 000 World Cup tourists are more positive than what has been reported in the media, the party said in a statement.

“The results are a ringing endorsement of our successful hosting of the 2010 Fifa World Cup and a testament to the successful rebranding of our country that occurred during this period,” said DA shadow minister of tourism and member of parliament, Greg Krumbock.

The survey also focused on related areas of interest, such as safety, personal experiences, public transport facilities and hospitality-industry prices.

About 70% of tourists felt safe in South Africa, while 26.4% believed they were very safe. Only 3.8% felt they were somewhat unsafe.

“A number indicated that their actual experiences were completely different to what they had been led to expect,” Krumbock said.

The party, which governs the Western Cape province, attributed the feelings of safety to the visibility of police officers. The government deployed more than 40 000 police men and women for World Cup operations.

Competition in the hospitality industry resulted in tourists being charged fairly. The survey revealed that 48% of tourists found prices to be reasonable and similar to those in their own countries.

Some 45% found prices, especially at restaurants, to be cheaper than in their own countries. Only 6.8% of tourists thought prices were higher in South Africa, “with most of these respondents finding taxi fares or accommodation more expensive”.

Although World Cup tourists came to South Africa to watch their favourite teams play, most said their best experiences were had while touring the country – according to the survey.

Only 23.5% of the visitors found watching their national team and the general World Cup experience to be the highlight of their trip, said the DA.

About 31.5% found activities such as whale-watching and game drives to be “their most memorable experience during the tournament”. The highly rated Kruger Park National Park was one of the most popular tourist destinations for game-spotting.

The survey shows that the potential of South Africa’s tourism sector to spur economic growth remains impressive, the DA said, adding that this was “due to the significant gap between actual experiences in our country and some negative perceptions that exist abroad”.

South Africa needs to embark on more aggressive marketing abroad, said Krumbock. More needs to be invested in the industry to “unlock this potential” and enable the country to compete effectively with destinations like Australia, he added.

“The World Cup has proved that this potential is far greater than previously realised, and single-minded determination is needed to take advantage of that.”