The Walker Bay wine district is particularly
noted for the cultivation of chardonnay
and pinot noir varieties.
(Image: Creation Wines) 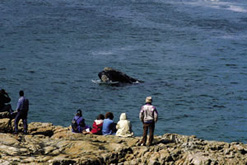 The southwestern region of South Africa is known particularly for its outstanding wine routes and sought-after tourist attractions, which include the country’s oldest wine route in Stellenbosch, and the ever-popular Cape Town.

Now, with a new logo, name and map, the Hermanus Wine Route R320, located about 115 km southeast of Cape Town, has re-launched.

The fishing town of Hermanus is renowned as one of the best whale watching destinations in the world, and even has an annual festival dedicated to the pastime. Visitors come from all over to watch the southern right whales frolicking in Walker Bay, their large presence announced by the world’s only full time whale crier.

The R320, a regional road that connects Hermanus with nearby Caledon in the Overberg region, is bursting with guest houses and restaurants all ideally situated for a spot of whale watching from the balcony or dinner table.

The road will also lead wine lovers to the tasting rooms of estates in the aptly named Hemel en Aarde (Afrikaans, meaning “heaven and earth”) Valley. There, 17 producers are ready to share their quality wines with visitors.

To mark the re-launch, wine producers have collaborated in the production of a special red blend also known as R320, sales of which will go towards a charity registered to give educational assistance to pupils in the Hermanus area.

Bottles of R320 are available from restaurants and retail outlets, and each costs about R100 (US$11.7).

Carolyn Martin of the Creation vineyard, and chairperson of the Hermanus wine route, said hopes were high that an amount between R250 000 and R300 000 (approximately $30 000 and $36 000) would be raised by the end of February 2012, for community upliftment.

Not just whales and wines

Between the wine tasting and whale watching, locals and tourists can also participate in a range of activities which include walking and hiking in the Fernkloof Nature Reserve and its fynbos covered mountains. The reserve is part of the Cape Floral Kingdom, which is the smallest but richest of the world’s six floral kingdoms.

Those who are fond of the cool Atlantic water will want to take full advantage of the wide open Blue Flag beaches or lagoons. Nearby Gansbaai offers shark cage diving, but sailing and scuba diving can be enjoyed from numerous locations.

Fishing is another great attraction. The waters of Walker Bay are home to steenbras, galjoen, red stumpnose and silver fish, to name a few. Rock lobster fishing is also a popular activity.

For the more artistic minded, there are several art galleries, antique shops and craft studios, such as Old Harbour Gallery, Tutamen and Ntsiki African Beadware. Boutiques, shops and markets also offer a wide variety of locally made gifts and jewellery.

Finally, the town is home to the Sansa Space Science, formerly known as the Hermanus Magnetic Observatory. Located in a geographically advantageous position for magnetic observation, the facility is one of thirteen regional warning centres around the world, which monitor extreme space weather and solar magnetic activity. Sansa Space Science is the warning centre for Africa.