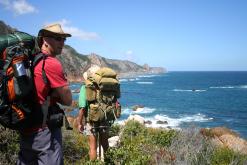 Beautiful seascapes greet the hiker
on the Harkerville trail. 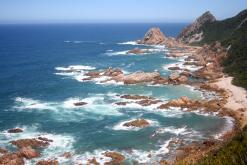 South Africans sometimes forget that they live within easy reach of the most beautiful and accessible wilderness areas in the world – some, literally on their doorstep.

One such treasure is the Harkerville Trail on the southern Cape coast, a hike which can pack the punch of a longer trail in just one weekend.

But it’s not just the ocean and the giant yellowwoods. There is so much more to treat the senses – the smell of the forest floor and the sea spray; sudden outbursts from red-billed wood hoopoes; and rows of edible-looking cup-shaped fungi marking the paths.

Inhabitants of the greater Cape area are generally spoilt for choice when it comes to hiking in the aptly named Garden Route, with the Outeniqua, Tsitsikamma and a host of other popular trails concentrated just in this area.

The Harkerville, however, remains a favourite for hikers who appreciate its diverse offerings, all squeezed into just two days.

This trail is rated “moderate to difficult” by those in the know. Port Elizabeth resident André Moolman has done the Harkerville 10 times and says it is the perfect benchmark trail to see if you are ready for more strenuous hikes, like the Fish River Canyon and the better known Otter, South Africa’s oldest hiking trail.

In size, the Fish River Canyon takes second place only to the mighty Grand Canyon in the US and forms the natural border between South Africa and Namibia.

“The Harkerville trail is a good measure for me to see if I am fit enough,” says Moolman, adding that it offers probably the most beautiful scenery a hiker will encounter in South Africa.

This is also the end point for the seven-day Outeniqua Trail, and energetic hikers may combine the two into a nine-day trek.

Day one is a 15km hike which starts off with a long stretch in the forest before you are suddenly greeted by a break in the foliage to a beautiful view of the sea far below you.

While nothing should be taken away from the forest and the mountain fynbos sections of the hike, it is the part trailing along the edge of the sea which brings the real thrill.

The use of “edge” in this instance is deliberate as you will find yourself with the sea spray flicking your feet and the waves charging in with purpose if the tide happens to be high during your crossing. Though the ledges across the rock face are not excessively high, hikers with fear of heights may feel nervous.

But, once safely over the rocks, the calm refreshing pools of seawater will delight you, while little fish and other creatures swim with you, sometimes taking a precautionary nibble at your feet. It’s worthwhile remembering to squeeze a pair of diving goggles and some flippers into your backpack.

In this little piece of indigenous paradise, the remnants of an experimental plantation of Californian redwoods, planted in 1925, are still to be found.

These remaining trees are all to be cut down but for one giant specimen of about 33 metres in height and more than a metre in diameter, which will mark time and location. The redwood is native to the west coast of America where it can grow up to 300 metres in height.

Harkerville is also a place where the smallest creatures have right of way, from the large black shongololos (Ndebele word for millipede, widely used in South African lingo) to the very common forest spider, a creature seemingly intent on building his web exactly at face height.

But as nature lovers tend to be mindful of these things, hikers manoeuvre carefully around these delicate webs, while a “mind the shongololo” from a fellow hiker is not uncommon.

The second night is spent at the comfortable Sinclair Hut, situated on higher ground. While the hut does not have beautiful views of the ocean, some points of this rocky coastline are close by and it’s worth a 700m stroll to watch the sun setting over the Indian Ocean.

During the whale season which starts to peak in October, it is not impossible to get excellent sightings of these magnificent creatures from various vantage points along the trail. The Southern Right whale is a common sight in these parts from around July to December as pods travel north from the Antarctic region to mate and breed.

In fact, the small coastal town of Hermanus, further south along the coast, is considered to be the best land-based whale watching area in the world and has its own whale festival and full-time whale crier.

The second part of the trail winds for 12km with some challenging parts over rocky ledges and pebbled beaches, before hikers tackle the stiff climb up to the car park and picnic spot located on top of the hill.

With muscular strain setting in, the last stretch through the forest is easy enough to walk even barefoot, with a soft forest carpet of leaves and twigs easing the way. Sunburnt and exhausted, you will know that you have finished a serious hike in just two days when finally you reach the Harkerville Hut once more.

But, every step would be worth it.