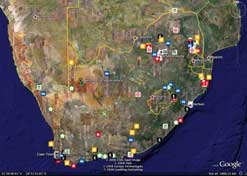 An overview of South Africa as it appears
in the new Google Earth layer.
(Image: South African Tourism)

A new Google Earth layer focusing entirely on South Africa promises to inspire more interest in the country, especially with the 2010 Fifa World Cup now firmly in the nation’s sights.

While there are hundreds of user-created layers, South Africa is only the third country, after New Zealand and Egypt, to meet Google’s exacting quality specifications and to be allocated its own official tourism layer.

Using satellite imagery, Google Earth takes users on a 3D tour of the world, showing terrain, cities, important landmarks, natural features, and more. The ability to zoom in right down to street level is a distinctive feature of the programme.

A layer provides a variety of points of geographic interest, such as tourist attractions or important world events, that the viewer can select to overlay the normal viewing area. These points of interest can include map, road, terrain, and even building data. Layers are often of educational and historic value.

Interesting layers created recently include one that tracks the destruction wrought by the May 2008 Myanmar cyclone, one showing the world’s volcanoes, another showing visible shipwrecks around the world, and a Crisis in Darfur layer which shows satellite photos of destroyed villages, locations of refugee camps, and provides links to more information online. A list of layers is available in the Layers panel in the Google Earth programme.

The South African layer, which features a host of attractions ranging from scenic drives and safari destinations to locations of the stadiums for the 2010 World Cup, was launched at the recent Tourism Indaba, held in Durban in May 2008. South African Tourism hosts this annual event which attracts players in the tourism industry from all over the world.

It goes live on Google Earth at the beginning of June 2008. Google Earth, says the programme’s developer, is now available in 27 different languages. Images are updated regularly, meaning that users can count on receiving up-to-date information. And with up to 350 million unique users hitting the site between January and May 2008, South African tourism will now receive even broader exposure to the global internet audience.

The layer introduces the viewer to 120 points of interest around South Africa, which are shown through satellite imagery, giving travellers a tantalising glimpse of what they can expect to see on their visit.

Each destination is categorised with an icon so that viewers can tailor their search to their own interests, whether it is adventure, culture, sport or nature that intrigues them. Holidaymakers can make use of the itinerary planner to get the most from their visit to South Africa. A few popular itineraries are suggested to help get the thinking process started.

Cultural destinations and those relating to heritage, such as the Cradle of Humankind and the Richtersveld National Park – both world heritage sites – are explored in the layer. Adventure travel, for which South Africa is renowned, is also extensively covered with links to white water rafting, skydiving, bungee jumping, abseiling down Table Mountain and more.

Then there is a category relating specifically to the 2010 Fifa World Cup. Visitors can learn about the stadiums and host cities that will be bringing the World Cup to Africa for the first time, and other football-related information is provided, such as links to local clubs and football bodies. For those planning a trip to South Africa in June 2010, the itinerary planner will ensure that all the important football host cities are included, as well as other useful information.

All the interactive Google Earth features that regular users have come to enjoy are there, such as related Wikipedia entries, and users may add their comments on images ranging from the Gautrain construction project to 2010 stadiums in progress.