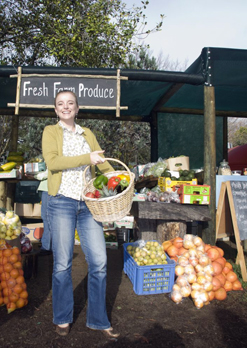 We all know regular visits to the golden arches or the colonel are not conducive to optimal health, and most of us try to eat a balanced diet, but it’s not easy. First, it’s hard to know what is actually healthy and, second, how on earth do you find it? Well, for those living in Cape Town it’s just become a whole lot easier.

Freelance writer Michelle Matthews recently published a book called the Whole Food Almanac – a guide to finding organic, artisanal and whole food in and around Cape Town. When asked the motivation behind the book, she listed a host of good reasons to rethink the way we eat and live.

“Obviously the whole food side is very important from a health perspective,” she says.

“Part of the reason this book was commissioned is that the editor and publisher, who was Jeremy Boraine at the time, were concerned about all their friends with cancer. Just seeing more and more people getting cancer at a younger age. I’ve got friends of friends who have to help single dads look after kids because the mom has died of cancer and she’s not even 40.

“That’s linked to additives in our food. What do we know about the things in our food? The preservatives in so-called cured meats in the shops are the worst.

“Artisanal or traditional meat curing is done with salt, spices and/or sugar, and then put into a dry storage area and kept cool. And it hangs there for months and months until it becomes a ham or salami. Salami should have natural penicillin. And the penicillin keeps other fungus off.

“Mass-produced salami usually has a covering of rice flour to make it look like penicillin. The salami in the shops is one of the most disgusting things you can ever eat. They are full of chemicals, especially nitrites and nitrates.”

But the book is not only about healthy eating. It’s not a bogeyman book telling you if you buy salami from a supermarket you will die. It’s actually about the joy of food, the joy of cooking and the joy of shopping. Yes, shopping can be a pleasure.

The joy of food

“I love food, and I love cooking,” says Matthews,

“I’m also interested in food heritage. Traditional foods and traditional ways of making food will get lost if people stop making them. It’s tied in with slow food, which started in Italy.

“What it really comes down to is that people don’t know how to cook anymore.  That’s why people are warming things up in microwaves. They think it’s hard. In UK schools they have compulsory cooking lessons where you learn to do basic stuff. If you fall out of the habit of cooking, it feels difficult and painful. You can make it quick and healthy.

“You perhaps grew up with your mom working and all these things on the supermarket shelf, and you didn’t see your mom cooking. Or all the cooking stuff out there is so fancy with Thai bamboo shoots, and you think cooking is hard or for fancy people, then you don’t cook. You’re intimidated.

“But just learning, for example, stuff like couscous – or make a tomato sauce and pasta. For people to learn to cook basic nutritious stuff that tastes good. You lose interest in food if you don’t cook. It all tastes the same, and then you make bad choices. It’s hard to wean yourself off processed food, and to learn to taste real whole food as nice tasting. People have to train themselves to enjoy the taste of real food.

“That’s where artisanal food comes in. It’s minimally processed, and made from fresh, seasonal ingredients.

“That’s why I’ve included producers and shops in the books. Some of the producers you can find in the chain stores, so you can get to know the products. I’ve included shops, but they have to have an organic, natural or artisanal focus.

“And the reason there are producers is so that people can know the people who make their food.  So you can meet and talk to the people who’ve grown the food, or made the cheese.  It’s really great, you go to – say – Dalewood, and these people have got up in the morning, milked the cows and handmade the cheese. They’re giving you this gift.”

It’s all tied in with living more consciously, and taking responsibility for your actions. People are more concerned about what they’re eating, where it’s from, and what chemicals it contains. People are starting to realise the connection between planet health and their own health.

People are also becoming more self-sufficient. They’re growing a certain amount of their own food, even if it is only in a couple of pots on the veranda of a fourth-floor apartment.

“There is a trend happening internationally,” says Matthews. “Pickling. It’s the new hot thing to do, it’s quite trendy. All this home ec stuff is coming very much into vogue with the recession and worries about the environment.

“And of course the locavore concept, getting things locally, supporting local producers, knowing your food is fresh and in season, and reducing your carbon footprint.

“I’ve also put it in so people don’t fall into weird traps like planning fancy dinner parties with artichokes in April when they’re only in season in October, November. Of course, this is a rough guide. It depends on rainfall and temperature.”

The book lists and describes about 250 producers, shops, restaurants, markets and other resources such as recycling and urban food growing.

“It covers the Western cape within a radius of about 250 kilometres from Cape Town – about two hour’s drive,” Matthews says. “Or, even better – about seven or eight hours by bicycle,” she adds.

The initial print run was 3 000, of which 1 000 have been sold in the first three months. Matthews is happy with the sales figures so far, and attributes the popularity of the book to various factors.

“This whole conscious living, organic thing,” she says, “is becoming more mainstream. Some people are sick of it and some are interested.

“It’s a good introduction. It’s got lots of info for people who just starting out, and even for people who are already into stuff like this, they find new outlets.”

The book is available through the main booksellers, but Matthews has also done her own marketing, selling the books at places such as producers’ markets. The single place where she had the most sales was at a gas metering conference company, of all things.

“They organise international conferences about gas metering,” she says. “My brother works there, and he sold a bunch of them. These are people who are interested in stuff like this but don’t know where to find it.”

Her future plans include doing a part-time masters degree at the Sustainability Institute at Spier, and – possibly – doing a similar guide for other cities in South Africa.