In the Valley of Desolation in the Camdeboo region of the Eastern Cape, a global online crowdfunded project with huge ambitions is set to transform a community where four of every 10 people don’t have jobs. This is South Africa’s Giant Flag, a development project so big it will be visible from space.

The Camdeboo is part of South Africa’s dry and tough Karoo desert, where economic opportunities are limited to sheep and ostrich farming, and not much else. Its major town, Graaff-Reinet, has an unemployment rate of 40%.

The Giant Flag aims to turn this around by combining tourism and sustainable green energy with job creation. The plan is to grow a 66-hectare field of desert plants, succulents and cactuses indigenous to the Karoo, in the colours of South Africa’s national flag – red, yellow, blue and green. The white part of the flag will be represented by gravel roads bisecting the cactus fields, and the black by 6.6 hectares of solar panels capable of delivering four megawatts of electricity to 4 000 homes.

It is, indeed, a giant project. The flag will take up an area equivalent to 66 football fields, or 660 000 square metres. The full precinct will ultimately include a hotel, conference centre, food gardens and adventure tourism.

The flag: excitement and national pride

The flag is the brainchild of Guy Lieberman, the green and social new business development manager at advertising firm FCB. The agency asked Lieberman to come up with a project that would both rekindle the national pride and excitement of South Africa’s 2010 Fifa World Cup and stimulate growth in neglected rural regions. He came up with a Giant Flag of plants to bring colour and jobs to the barren Camdeboo.

It is not a modest project. Over its two-year, three-phase development, is expected to cost something in the region of R180-million. But when its gates do open it will have brought 700 permanent “green-collar” jobs – mostly for women – into a deeply depressed region, and built enormous tourism infrastructure for the Eastern Cape.

The first phase, which cost R4-million, is complete. The land has been secured, and the zoning, environmental impact study and business plan have all been approved. The second phase, launched in late October, will cost some R25-million. 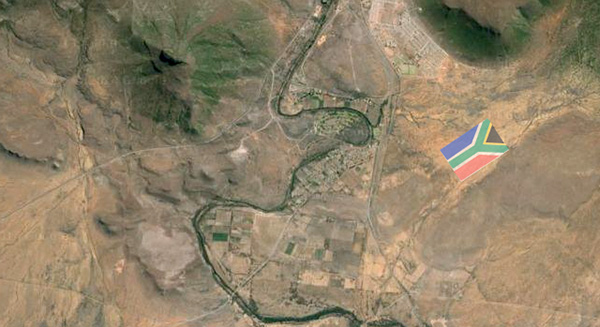 A visualisation of a satellite image of the town of Graaff-Reinet with the completed Giant Flag. (Image: Giant Flag)

The project is supported by three government departments – including tourism – as well as provincial and local authorities, a range of corporate sponsors, the Nelson Mandela Metropolitan University and Development Bank of South Africa. The SABC has committed to broadcasting 52 weekly two-minute episodes about its progress. Google has given the flag a permanent monthly advertising grant worth R100 000, and powers its online platform.

At the launch in Graaff-Reinet on 23 October, tourism minister Tokozile Xasa said her industry had enormous power to improve the lives of people in rural areas, far from urban centres of economic activity.

The Giant Flag project, she said, “dovetails with our department’s National Rural Tourism Strategy that has community beneficiation as is its core. The strategy is aimed at developing rural tourism that can greatly contribute to the alleviation of pressure in areas that are often characterised by poverty and underdevelopment. The strategy illustrates the National Department of Tourism’s commitment to the development of rural economies in general and rural tourism in particular.”

Offsetting thousands of tons of carbon

The second phase will see the flag take form. The 2.5-million plants – fire barrel cactus for the red, golden barrel cactus for yellow, blue dan succulent for blue and spekboom for green – will be planted on the 66-hectare site, and the white road laid down.

The plants will not only create a stunning display of South Africa’s national flag and help draw tourists to the area. They will also scrub 87 300 metric tons of carbon dioxide from the atmosphere every year – equivalent to the energy used by 7 276 typical American households. They will also bring rich and diverse plant life to this barren desert area.

The full site will take up a full 100 hectares, one square kilometre, surrounded by security fencing. In the 34 hectares between the flag and the fence, gardens growing food and medicinal plants will be established.

The key to getting the Giant Flag in place is global crowdfunding through the project’s Google-powered website. People anywhere in the world are invited to set up profiles on the site, and purchase units of plants, road or solar panels. The prices range from US$10 for the plants (about R110), $100 for the road (R1 110), and $250 (R2 700) for a unit of the solar field. Registered users are then given the GPS coordinates for the sections of the flag they have bought, and can monitor progress online, in real time.

Helping people and the environment

The third phase of the Giant Flag is where the green development really begins. Starting early next year, construction will begin on the 6.6-hectare solar field, set to cost R100-million. A further R45-million will be spent on a 22 000 square metre canopy structure, a biogas facility, algae plant, civil works and a water reservoir with an 11-million-litre capacity.

The solar plant will be the first large, commercial scale solar field in the world to harvest water. The energy it produces will be sold into South Africa’s national grid, and the money – with other profits from the Giant Flag project – will go into endowment and education funds. These will finance micro-loans and skills development for the local community, as well as school upgrades and tertiary education bursaries.

The final phase of development will include building a tourism precinct with a conference centre and hotel, which will offer adventure tourism activities such as microlighting and hot air ballooning.