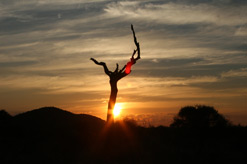 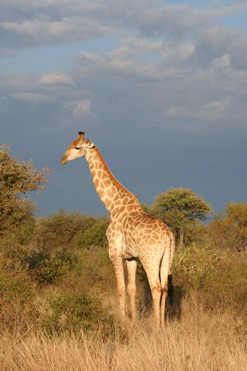 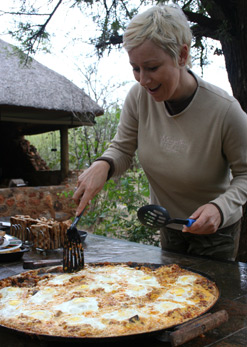 Visitors to South Africa’s 2010 Fifa World Cup will find there are hundreds of luxury game lodges charging dollar rates for tourists to “experience the African bushveld” after the games are done. There’s a lot to be said for the five-star safari option – but does being waited on hand and foot really constitute an authentic bushveld experience? And what if you can’t afford to pay all those dollars?

Some national parks have basic accommodation, and there is always the alternative of staying in a nearby town or resort and driving into the park each day – but that’s also not the ideal way to experience the bushveld.

Fortunately there is another option, combining reasonable down-to-earth comfort with a really close-up bush experience, as my family and I recently discovered on a trip to the Madikwe Game Reserve. Lying near the border between South Africa and Botswana, it goes by the name of Mosetlha Bush Camp.

Roughing it in style

Mosetlha was started in the early 1990s as a rustic camp with basic facilities, a place where rangers-in-training and other wilderness enthusiasts came to learn about wildlife conservation during Operation Phoenix, a project to reintroduce game into the Madikwe area.

As more and more lodges were built in the reserve and the number of tourists increased, Chris and June Lucas, with their daughter Caroline, opened Mosetlha to the wider public. But they kept the camp’s ecological ethos and relaxed, down-to-earth atmosphere.

At Mosetlha, you do things for yourself. There’s an old-school donkey boiler, with water heated in a drum over a fire for bucket showers, and you also take your own water to flush the VIP – ventilated improved pit – toilets.

That may sound a little rough and ready, but this really is a comfortable form of camping. In fact, it isn’t actually camping at all. Guests stay in raised wooden cabins, with canvas awnings over the front and back to allow maximum appreciation of the sights and sounds of the bush – including, at night, the not-too-distant howls of hyena. There is no electricity, but oil lamps give a warm and cosy glow.

Mosetlha may be a place where you can get the dust of Africa on your feet, but you don’t do everything for yourself. Sumptuous but simple meals are served up from the camp kitchen and eaten communally. In between there are lazy late mornings and early afternoons when you can snooze or read a book. After dark, a roaring fire encourages the cheerful swapping of anecdotes over a glass of wine or a beer from the honesty bar. You settle very easily into the indulgent rhythms of camp life.

The focal points of each day are, of course, the morning and evening game drives. Operation Phoenix was tremendously successful, and today Madikwe boasts an abundance of wildlife. With a large mammal population of over 16 000, the reserve provides some of the best game-viewing in the country.

Our visit yielded, among other sightings, a close-range encounter with lions at a zebra kill, a pack of wild dogs (very rare), both white and black rhino as well as a leopard up a tree. On one occasion, a pride of lions – moms, dads and cubs – sauntered up to our Land Rover and strolled casually past on either side, leaving our party a little perturbed.

You’re guaranteed to see some great game at Madikwe, but there is a lot more to enjoy besides. For the twitchers, there are over 340 bird species to spot. Amateur geologists can take in the striking topography of the area, with numerous koppies and even low mountain peaks rising from the savannah plain.

And there’s nothing quite so gratifying as that moment when, just as the off-road bumps are starting to take their toll, your guide stops the vehicle and you climb out to discover a table, magically produced and laden with goodies: coffee and rusks for those brisk mornings, or drinks and snacks in the evenings while the orange disc of the sun slips below the horizon.

I told you this was roughing it in style …

Good game rangers are walking encyclopaedia when it comes to flora and fauna – and they love to share useful bits of trivia – such as the fact that the collective noun for giraffes is a “journey”. Mosetlha’s knowledgeable guides can also tell you almost anything you might want to know about the region, including its unusual history.

Places such as Groot Marico and Mafikeng Road have been immortalised in the stories of Herman Charles Bosman, and the area regularly attracts literary pilgrims for whom the place has a special resonance. But long before Bosman invented his famous serio-comical narrator, Oom Schalk Lourens, the terrain had been criss-crossed by Mzilikazi and the Matabele people, Boer and British soldiers, traders, explorers, hunters and missionaries.

If the spirits of the past haunt Madikwe, it is a gentle haunting. Like so many of South Africa’s game reserves, it is a place of tranquillity and astounding beauty. Unlike any other park, however, it is also home to the unusual and memorable wilderness experience that is Mosetlha Bush Camp.