Rocks and volcanic ash from the Karoo have led scientists from the University of the Witwatersrand to deduce that a single global mass extinction event 260 million years ago wiped out almost all life on the planet.

“The Chinese picked up a major turnover in rocks which pointed to a marine extinction event of invertebrates round about 260 million years ago. We had a feeling that our rocks [in the Karoo] would cover the same time period,” said Professor Bruce Rubidge, the interim director of Wits’ Evolutionary Studies Institute.

It was initially thought by scientists that a land extinction event, which resulted in the extinction of nearly 80% of species, happened earlier in a specific geological period called the Permian, while the marine extinction happened at the end of that period.

The team found that the traces of a mass extinction on land, and the date of the rocks in the Karoo, matched the marine extinction that the Chinese discovered.

Michael Day, a postdoctoral fellow at Wits who was continuing the work started by Rubidge 30 years ago, said this new discovery suggested that there was one cataclysmic event that led to both extinctions.

“A mid-Permian extinction event on land has been known for some time but was suspected to have occurred earlier than those in the marine realm,” he said. “The new date suggests that one event may have affected marine and terrestrial environments at the same time, which could mean its impact was greater than we thought.”

The end-Permian extinction is regarded as being more severe that the extinction of the dinosaurs, which happened at the end of the Creataceous period 65 million years ago.

The Permian extinction, which National Geographic described as “when life nearly came to an end”, led to the disappearance of a diverse group of early mammal-like reptiles called dinocephalians, which were the largest land-living animals of the time.

Riches of the Karoo basin

“The South African Karoo rocks host the richest record of middle Permian land- living vertebrate animals. This dataset, the culmination of 30 years of fossil collecting and diligent stratigraphic recording of the information, for the first time provides robust fossil and radioisotopic data to support the occurrence of this extinction event on land,” said Day.

“The volcanic activity might have caused both extinctions [land and marine] as one global event.”

He said the Massachusetts Institute of Technology and the Smithsonian Institution from the United States were part of the project.

The team’s findings are contained in a paper titled: “When and how did the terrestrial mid-Permian mass extinction occur? Evidence from the tetrapod record of the Karoo Basin, South Africa”. It was published on 8 July in the latest issue of the Royal Society’s biological journal. 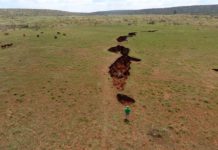