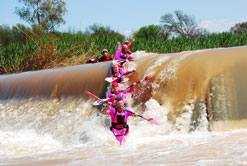 The fundraiser-driving K4 crew of Grant
van Greune, Clive and Jessica Goble, and
Minnaar Lyell are determined to master
the Cradock Weir this year. 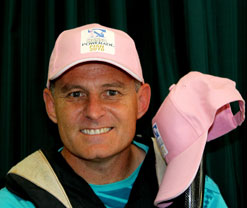 Race publicity officer Dave Macleod is
one of the paddlers who will be showing
their support for the Cradock Cancer
Care fundraiser by sporting a special
pink cap during the marathon.
(Images: Gameplan Media)

The bustling Eastern Cape agricultural town of Cradock is set to be tickled pink over the first weekend in October.

Not only is the historic town anticipating an injection of about R5-million (US$707 000) into the local economy thanks to the staging of the annual Hansa Powerade Fish River Canoe Marathon, but many of the paddlers, their support crews and spectators will be letting the event go to their heads – literally – as they sport pink peak caps in a special fundraising initiative in aid of the private Cradock Cancer Care Unit.

This year’s event, the 29th edition, is expected to attract about 1 700 entrants in K2 (double) and K1 (single) canoes, as well as the newly introduced K3 competitive class – a far cry from the 77 intrepid paddlers in 52 boats who took part in the inaugural event back in 1982.

Since then the marathon has grown enormously in size and stature, gaining a world-class reputation and enticing some of the world’s top paddlers to put their skills to the test over nearly 82 km of the muddy brown waters of the Fish River as it flows through the scenic serenity of South Africa’s Karoo region.

Invited top international paddlers who will be taking part this year include the K2 pairs of current world sprint champion Max Hoff and partner Stephan Stiefenhoefer of Germany, Robert Knebel and Tomas Slovak of the Czech Republic, and Loic Vynisale and Quentin Bonnetrain of France.

While the Germans and Czechs are returning to the event, the young French team – both of whom are members of France’s national wild water team and holders of various world titles – will be making their Fish River debut.

“I really want to take part in the Hansa Powerade Fish because it is a legendary race,” said 25-year-old Vynisale. “It’s a race I have dreamed about since I got into white water racing.”

Other paddler contingents will be travelling from the UK, Australia and even Poland to take part in the mighty Fish River Marathon, a South African sporting highlight and considered one of the world’s elite canoeing events.

Among the top South African paddlers battling it out will be Hank McGregor and Grant van der Walt from Gauteng; Len Jenkins from KwaZulu-Natal; and Breede River marathon winners Piers Cruickshanks and Jacques Theron.

The marathon covers 81.8 km over two days and this year takes place on 1 and 2 October.  The weekend will see Cradock fair bursting at the seams as thousands of paddlers, their seconds and spectators flock to the picturesque small town, which was established in 1812, for an event almost as popular for the warm hospitality of the locals as for the adrenaline-pumping wild-water river racing.

Race organising committee chairman Louis Copeman puts the economic benefits that the race holds for the town in the region of R5-million.

And that is not counting the R50 000 ($7 000) minimum target the compassionate athletes hope to raise this year for Cradock Cancer Care.

The fundraising initiative was introduced last year when special permission was granted for a K4 (four-man) craft to take part in the marathon. These are usually not allowed to enter as their length makes them unwieldy and potentially dangerous in the race.

However, an exception was made for the team of Grant van Greune, Clive Goble and his daughter Jessica, and Minnaar Lyell who approached the organisers after a close encounter with the extra challenges cancer patients in the Cradock area face.

The town has no cancer treatment facilities, meaning that most sufferers have to undertake the roughly 500 km round trip to an oncology unit in Port Elizabeth on a weekly basis.

Through sponsorships for their pioneering, bright pink K4 craft, topped up by support from paddlers through haircuts and the purchase of pink ribbons, they aimed to raise R100 000 ($14 100) for Cradock Cancer Care to assist patients with their transport and other costs.

At the end of the 2009 race they had raised R52 000 ($7 353) and pledged to be back this year to reach their target. Again with the support of the race committee, they are appealing to paddlers and supporters to purchase one of the 1 000 special pink caps with a distinctive race logo, and to wear it during the event to make a highly visible show of support for the fight against the illness.

“Many of the paddlers have been affected by cancer in some or other way, and it is so encouraging to see this initiative come from the paddlers and their clubs,” says Copeman.

“We feel that whatever the paddlers contribute during their weekend in the town will make a huge difference to the locals who are struggling with the disease.”

He urges the paddlers and their teams to support the fundraiser: “Let’s turn the Fish River pink for two days and make it clear that the athletes and their seconds support the fight against this disease – and will leave a lasting legacy in Cradock long after everyone has packed up and gone home after the race.”

For the pink-bedecked crew in the bright pink K4 the race has special significance as the fundraising drive will assist friends in Cradock who are directly affected by the shortage of cancer treatment facilities.

But they also have another target this year. They will truly be in the pink should they successfully shoot the massive three-metre Cradock Weir shortly before the end of the race. This obstacle got the better of them last year, despite three attempts to negotiate it.

Originally established on the banks of the Great Fish River as a border stronghold to contain the Xhosa who competed with settlers for grazing grounds for their cattle, Cradock is a charming town that boasts wonderful architecture in its many well preserved buildings.

The original part of the town is graced with some architectural gems, like the imposing Dutch Reformed Church, a national monument and designed as a virtual replica of London’s St Martin-in-the-Fields, and the Olive Schreiner Museum, located in the famous writer’s one-time home at 9 Cross Street and devoted to her life and works. Schreiner spent much of her early life in Cradock and was said to have written her best-known novel The Story of an African Farm while working as a governess on local farms.

Among the best-known landmarks in the town are the Victoria Manor Hotel and Die Tuishuise cottages, a collection of refurbished Victorian-era craftsmen’s houses in Market Street. These houses have won the coveted Simon van der Stel Gold Medal for restoration.